A Bronx man lost his entire family in the devastating fire in his apartment building.

NEW YORK - Prayers and the compelling need to bury the dead filled a Bronx mosque Wednesday, as a bereaved community prepared to say goodbye to those lost in New York City's most devastating fire in decades.

Among those awaiting funeral rites are a 2-year-old boy, a mother who died with three of her children, a family of five, and a husband and wife whose four children are now orphans. In all, 17 people died, including eight children.

Burial plans remained uncertain as some families wait for funeral homes to deliver their loved ones and, in some cases, deciding between burials here or having their loved ones returned to Gambia. Islamic law calls for bodies to be cleansed and buried as soon as possible after death, usually within 24 hours.

"This community, these people have gone through so much," said Sheikh Musa Drammeh, who is helping the neighborhood cope with the tragedy at a Bronx apartment complex.

"Now they are mourning, but they are very understanding that if it happened, it had to happen," he said. "And they have no right to question why it happened." 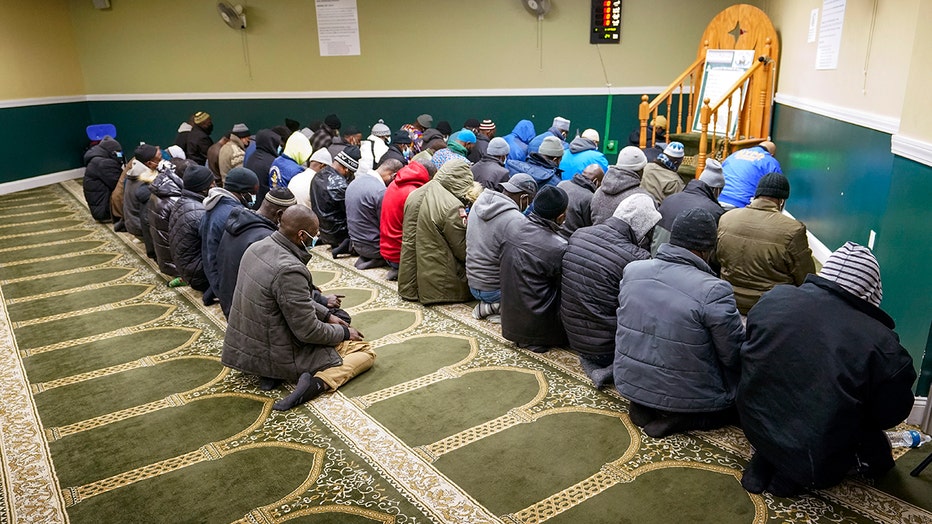 Members of the Masjid Ar Rahman pray in the Bronx, N.Y., Wednesday, Jan. 12, 2022. The Mosque is a place of worship for some of the residents of the building that suffered the New York City's deadliest fire in three decades.  (AP Photo/Mary Altaffer)

The medical examiner's office said two of the dead were released earlier in the week and said funeral homes have yet to take possession of the others.

"We have been open, and we are ready to release the decedents, so there's no delay on our end," said the medical examiner's spokesperson, Julie Bolcer.

A memorial wall took shape near the burned apartment building Wednesday afternoon, as a Miami man, Leo Soto, invited passers-by to affix photos of the dead, flowers and signs with messages like "Bronx strong" to a fence. He had helped organize a similar effort after last June's condo collapse in Surfside, Florida, and traveled to the Bronx after hearing about the fire.

"It's a different community," Soto said, "but the same amount of suffering."

Community leaders were huddling to plan funeral arrangements. The vast majority of those who died in the fire had ties to Gambia, Africa's tiniest country.

"The most important thing is really giving each other support. We are all members of the same community, so we are like family," said Haji Dukuray, whose niece, Haja, died in the fire with her husband and their three children — Fatoumata, 5, Mariam, 11, and Mustafa, 12.

Mustafa had just celebrated his birthday, the night before the fire.

"Such beautiful angelic eyes," neighbor Renee Howard, 68, had said about Mustafa earlier in the week.

The medical examiner's office said all the victims suffocated from the thick smoke that poured out of a third-floor apartment, where officials say a malfunctioning electrical space heater sparked the fire. The fire itself didn't spread far, but the smoke streamed into hallways and filled a stairwell.

People ran down the darkened steps, some from the top floor of the 19-story building. Many escaped, but others collapsed and perished on their way down.

In the first lawsuit to arise from the fire, a married couple that lives in the building accused the building's owners of negligence because of a lack of functioning safety measures.

The lawsuit, filed Tuesday in state court in the Bronx, cites self-closing doors that didn't close, fire alarms that went off "all the time" and the lack of a sprinkler system, although one was not required by law.

The lawsuit seeks class-action status for all building residents and includes demands for at least $1 billion in damages.

In response, the ownership group, Bronx Park Phase III Preservation, LLC, said it was "devastated" by the tragedy and was "cooperating fully with the Fire Department and other agencies as they continue to investigate."

A list of names of the deceased from New York City police included eight children. The dead ranged in age from 2-year-old Ousmane Konteh to 50-year-old Fatoumata Drammeh, who died along with three of her children — Foutmala, 21, Nyumaaisha, 19, and Muhammed, 12.

Ishak Drammeh arrived at the mosque Wednesday to join in prayers and make funeral arrangements for his wife and three children, who he plans to lay to rest in the United States.

Drammeh was drained but calm as he spoke inside the mosque.

He was thankful that another daughter survived and hopes his son Yajub, 16, will soon be released from the hospital.

He was in Columbus, Ohio, for work when a cousin informed him of the fire.

Inside the mosque, people sat with Drammeh and kept him company between prayers.

The mosque's imam, Musa Kabba, envisioned a single service for all the Gambian victims as a way to surround them with support. Two of the dead were believed to come from families hailing from Mali, and would have separate services.

"We're all very anxious, to be honest with you," said Dukuray. "It's the most important thing to know right now and I can't focus on anything until that really happens."

But amid the tragedy, he and others said, the fate of their loved ones is in God's hands.

"As a Muslim, what we are taught in our faith, what it teaches us, when anything happens to us when there's a disaster or whether you lose something or you lose a loved one," he said, "is that the good Lord has allowed it."

Dukuray continued: "The only thing we are guaranteed in this life is death."

A vigil was held in New York on Tuesday evening for the victims of a deadly apartment fire in the Bronx. (By The Associated Press)