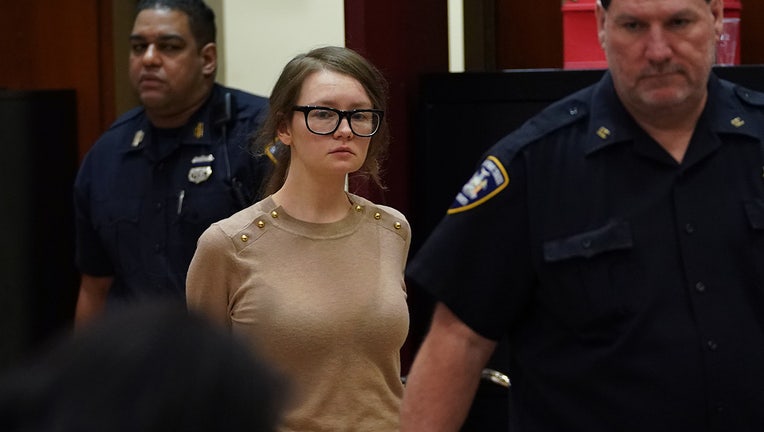 Anna Sorokin is seen in the courtroom during her trial at New York State Supreme Court in New York on April 11, 2019. (TIMOTHY A. CLARY/AFP via Getty Images)

NEW YORK - Anna Sorokin, who pretended to be a German heiress named Anna Delvey, is continuing to fight to try to stay in the U.S.

She remains in Immigration and Customs Enforcement (ICE) custody at the Orange County Correctional Facility in Goshen, New York, but her lawyer reportedly says he is filing appeals in the case.

Anna ‘Delvey’ Sorkin was featured in the Netflix docu-drama 'Inventing Anna' has been held since release from prison for overstaying a visa. Sorokin came to New York City in 2013 and tried to get a huge loan to set up a high-end members-only club in Manhattan while using the name Anna Delvey.

She allegedly left several high-end hotels with large unpaid bills and is accused of scamming wealthy New Yorkers out of hundreds of thousands of dollars and convincing people that she had a fortune of about $67 million overseas, prosecutors said at her trial.

Sorokin served less than two years of a sentence that carried a minimum of four years behind bars before being released on a "merit release" in February 2021 but ICE quickly took her into custody for deportation.

Attorney Duncan Levin says he is planning to appeal for a new trial in the state supreme court on the conviction that is the basis for Sorokin's deportation.

Levin told Fox News Digital that, "if the conviction was overturned and she's successful, then there's no basis to deport her."

"I lived out most of my adult life in NY and a lot of my friends and support system are based in the US," Anna Sorokin told Fox News Digital in an emailed statement. "I don't see a reason why I should be banned forever while so many violent offenders get released by ICE on daily basis."

An ICE spokesperson told FOX 5 NY in March that its Board of Immigration Appeals (BIA) "granted Sorokin’s emergency stay request" in November 2021, pending removal. The agency said it does not discuss future removal operations due to operational security.

Anna ‘Delvey’ Sorokin was recently interviewed on Alex Cooper's Call Her Daddy podcast.  She appeared over a video call from the ICE detention center.  During the podcast she said she never claimed she was a German heiress.

She also said the part of the Netflix show Inventing Anna that showed her attempting suicide was completely made up for the show.

While it was widely believed that she came from a wealthy family and had a large inheritance coming to her, her roots were much more meager.  Her father, Vadim Sorokin moved the family to Germany from Russia.  He owned his own small business and also drove a truck for a living for a period of time.