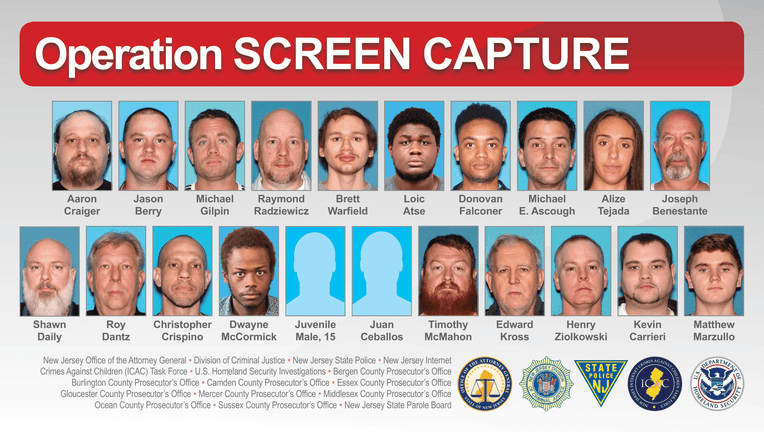 Credit: Office of the Attorney General of the State of New Jersey

Attorney General Gurbir Grewal announced the arrests Wednesday, noting they were made between March 18 and July 31. They stemmed from “Operation Screen Capture,” a joint operation launched in response to a dramatic increase in reports of potential threats to children from online predators during the coronavirus pandemic.

“Reports to our Internet Crimes Against Children Task Force of potential predatory conduct against children are up as much as 50 percent during the COVID emergency as homebound children, starved for outside contact, spend more time on their devices, and opportunistic sexual predators target them online,” said Attorney General Grewal. “We urge parents to be vigilant about the online activities of their children and warn children that the strangers they meet on popular social media sites, apps and gaming platforms may be out to harm them. We will continue to work overtime to arrest child predators and those who participate in the cruel exploitation of children by sharing child sexual abuse materials.”

Aaron Craiger, 34, of Oklahoma, a registered sex offender, was arrested on March 18 at a motel in Atlantic City after he allegedly traveled from Oklahoma to meet two men who offered him access to underage girls for sex. In reality, the defendant had communicated with undercover investigators from the New Jersey State Police and U.S. Homeland Security Investigations. One investigator pretended to offer his 12-year-old daughter for sex, and the other, his girlfriend’s 11-year-old daughter.Craiger, who had condoms with him when arrested, also allegedly possessed and distributed child sexual abuse materials.

Jason Berry, 40, of Keansburg, N.J., allegedly sexually exploited a 14-year-old girl he met on social media, manipulating her into sending him naked pictures of herself engaging in sexual acts. He allegedly had the girl carve his initials into her legs. He then tricked the girl into revealing her mother’s phone number and sent those images to her mother.

Alize Tejada, 21, of Newark, N.J., allegedly sexually assaulted a very young child.She allegedly videotaped herself performing a sexual act on the child and posted the video on social media.

“Our children are at an increased risk to fall victim to opportunistic online predators during this pandemic, as students have no choice but to turn to their devices to connect with friends and family and in many cases to prepare for remote learning,” said Colonel Patrick J. Callahan, Superintendent of the New Jersey State Police. “The State Police will continue to work with our law enforcement partners, and we will be unrelenting in our efforts to keep our children safe, but we cannot do it alone. We urge all parents and guardians to have conversations with your children about the dangers that exist on the internet and to closely monitor their online activity.”