Eta is moving over Honduras as a weakened tropical depression. (Credit: Bomberos Honduras via Storyful)

SAN PEDRO SULA, Honduras (AP) - As the remnants of Hurricane Eta moved back over Caribbean waters, governments in Central America worked to tally the displaced and dead, and recover bodies from landslides and flooding that claimed dozens of lives from Guatemala to Panama.

It will be days before the true toll of Eta is known. Its torrential rains battered economies already strangled by the COVID-19 pandemic, took all from those who had little and laid bare the shortcomings of governments unable to aid their citizens and pleading for international assistance.

In Guatemala, the first army brigade reached a massive landslide Friday morning in the central mountains where an estimated 150 homes were buried Thursday. They had not recovered any bodies yet, but said that more than 100 people were believed to be missing, the army announced. Numerous smaller landslides have blocked highways and access roads to the remote town of San Cristobal Verapaz.

A week of rain spoiled crops, washed away bridges and flooded homes across Central America. Hurricane Eta’s arrival Tuesday afternoon in northeast Nicaragua followed days of drenching rain as it crawled toward shore. Its slow, meandering path north through Honduras pushed rivers over their banks and pouring into neighborhoods where families were forced onto rooftops to wait for rescue.

“We can’t get off our houses’ roofs because the water is up to our necks in the street,” Munguía said. She managed about two hours of sleep Thursday night between the intermittent rain and damp chill.

Munguía had yet to see any rescue boats or any authorities. Her neighbors likewise occupied their roofs.

Her home in La Lima, a San Pedro Sula suburb, is 150 feet from the roiling Chamelecon river and only a short way from the international airport’s runway. The neighborhood flooded in 1998 during Hurricane Mitch — a storm that killed more than 9,000 people in Central America — but Munguía said there is more water this time.

It had been raining hard since Monday even though Eta’s center didn’t enter Honduras until Wednesday. Anticipating flooding they had started raising appliances and other household items, but the water entered in a torrent Thursday morning. 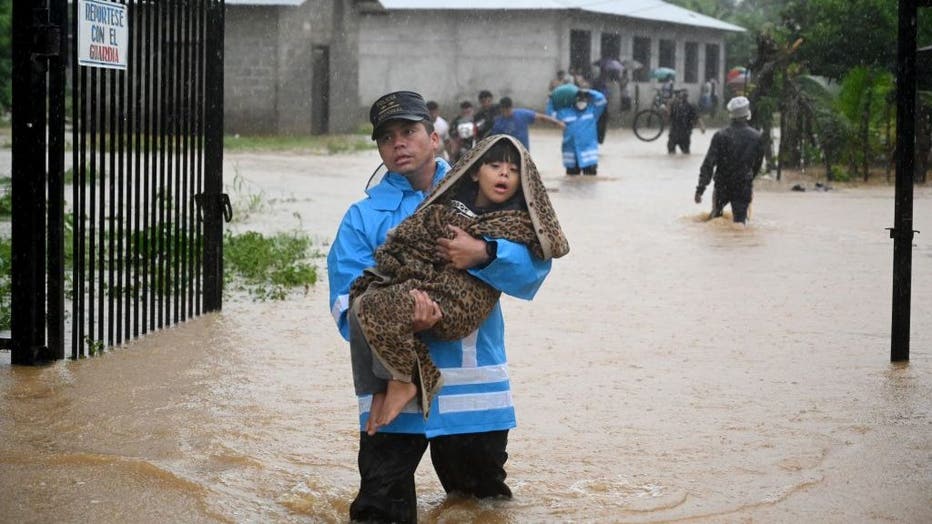 Hurricane Eta slowed to tropical storm speeds on Wednesday morning even as it pummeled Nicaragua, killing two people there and one in neighboring Honduras, while unleashing fierce winds and heavy downpours. (Photo by ORLANDO SIERRA/AFP via Getty Imag

“In 10 minutes my house filled up,” she said. “We couldn’t escape in any direction because everywhere was full of water.”

Francisco Argeñal, chief meteorologist at the Center for Atmospheric, Oceanographic and Seismic Studies, said as much as 8 inches of rain had fallen in just the past two days in some areas.

The death toll in Honduras rose to at least 21 people Friday, confirmed by local authorities, but the country’s emergency management agency reported only eight.

“We know there are a lot of dead people, we’ve seen them, but until we receive official information we can’t certify them,” explained Marvin Aparicio, head of the agency’s incident command system. “In the coming hours, we are going to start to see, to our regret, Dante-esque scenarios of people found dead” as floodwaters recede.

The government estimates more than 1.6 million have been affected. It said rescues were happening Friday in San Pedro Sula and La Lima, but the need was great and resources limited.

“I would say the national capacity has been overwhelmed by the size of the impact we are seeing,” said Maite Matheu, Honduras director for the international humanitarian organization CARE. The group was using its network of contacts in Honduras to identify the hardest-hit areas and catalogue their most-pressing needs.

Honduras Foreign Affairs minister Lisandro Rosales said via Twitter that “the destruction that Eta leaves us is enormous and public finances are at a critical moment because of COVID-19, we make a call to the international community to accelerate the process of recovery and reconstruction.” 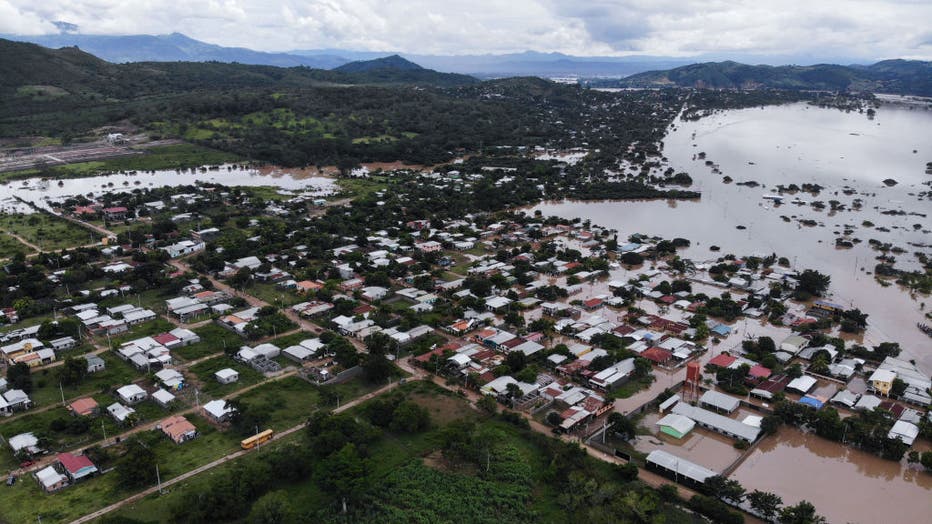 An aerial view of the Pimienta municipalty affected by te floods caused by the tropical storm Eta on November 05, 2020 in La Lima, Honduras. (Photo by Yoseph Amaya/Getty Images)

Observers are already anticipating that the havoc wrought by Eta will pressure more people to migrate from countries that are already some of the primary senders of migrants to the United States border in recent years.

“Now with this situation, this is going to be an exodus, a massive exodus of migrants toward the north,” said Matheu.

Early Friday, Tropical Depression Eta had maximum sustained winds of 35 mph (55 kph) and was moving north at 7 mph (13 kph). The forecast had it strengthening to a tropical storm before nearing the Cayman Islands Saturday and crossing Cuba Sunday. From there it could reach Florida or eventually head toward the U.S. Gulf coast, though the long-term path remained uncertain.

“Whatever comes out (of Central America) is going to linger a while,” said Colorado State University hurricane researcher Phil Klotzbach. “I’m not convinced we’re done with Eta.”