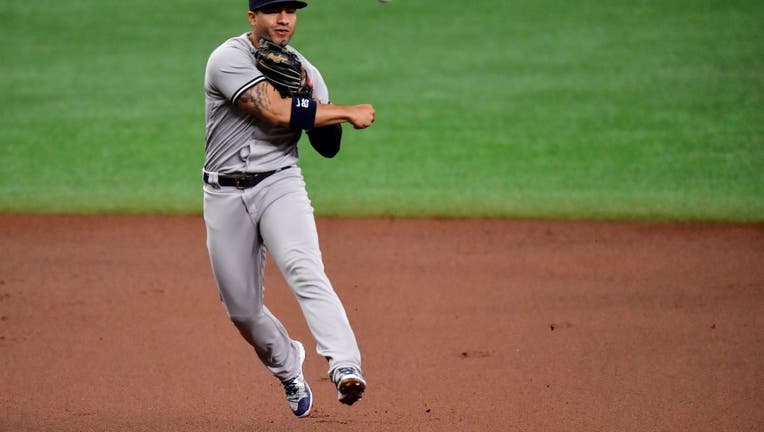 Gleyber Torres #25 of the New York Yankees fields a ball during the first inning against the Tampa Bay Rays at Tropicana Field on May 11, 2021 in St Petersburg, Florida. (Photo by Douglas P. DeFelice/Getty Images)

Torres is among eight so-called breakthrough positives among the Yankees — people who tested positive despite being fully vaccinated.

"Certainly unexpected," Yankees manager Aaron Boone said of Torres. "Obviously everyone, Major League Baseball, that's in charge of testing is looking into that. The variants that could be out there if that is the case."

The Yankees said the team is undergoing additional testing and contact tracing, with the assistance of the baseball commissioner’s office and its medical experts. The New York State Department of Health is advising the team.

New York general manager Brian Cashman said MLB was in contact with the Centers for Disease Control and Prevention on Thursday about the Yankees situation.

"With regard to the Yankees, we obviously need to learn more about that situation," CDC director Dr. Rochelle Walensky said. "My understanding is that six of the seven reports, six of the seven infections, were indeed asymptomatic infections. And we will look to more data from that report to understand what happened there. All of the real world data we’ve seen that’s been in the published literature, large studies, in many different settings, have demonstrated that those vaccines are effective, have a high effectiveness against disease."

"We are maybe a case study to some degree," Cashman said.

Torres played in Tuesday night's game at Tampa Bay and then was out of the lineup Wednesday night.

"When you read the fine print, they tell you that you still could get the COVID and the vaccination is to protect you from the symptoms, either to eliminate them all together and protect you if not fully protection then the percentages," Cashman said. "But the one thing I take from this I believe the vaccine is working. We've got eight positives, seven of the eight presented as without symptoms."

"Take great comfort, thankfully, that all were vaccination with the J&J provided from two different states," Cashman added, referring to the Johnson & Johnson vaccination. "We believe it created the nice protection that we have to protect them from obviously something severe or something much more difficult to be handling than we currently are."

Cashman said Nevin had symptoms that are no longer present.

"We’ve been rocked here the last several days," Boone said. "I think it's stopped all of us a little bit in our tracks. We're dealing with a lot. Our heads are spinning trying to get our hands wrapped around everything."

New York said all are under quarantine protocols in Tampa.

Boone said all eight continue to test positive. He added that there were no new cases Thursday and that all other players were available to play against the Rays.

"There is still concern," Boone said. "I think the one positive right now is that today was the first day of no new cases. All saliva tests from yesterday that have come back in today were all negative. I hope that is good news and hopefully means we’re moving in the right direction."

"I think if this was last year, it would be like a canceled game without any questions," Glasnow said. "I think they have a good grip on what’s going on. From what I know no one from our team has tested positive or anything, so there’s definitely like separation from their side."

The Yankees reached the 85% vaccination level on April 30, which allowed MLB protocols to be loosened. Among the changes, the requirement for masks in dugouts and bullpens was dropped.

"I think when we got to that threshold, frankly I probably relaxed a little bit," Boone said. "I just think for us it just kind of made us be probably a little more cautious."

Masking and social distancing are a focus with the Yankees.

"I think that guys are trying to be as cautious and respectful to everybody as they can," Yankees pitcher Corey Kluber said. "It’s obviously changing at certain points in time, things like that. So just trying to be on our toes and be willing to adjust if necessary."

Andújar started at third, and Gio Urshela moved from third to shortstop.