NEW YORK - Winter storm Quinlan is bearing down on the East coast.

Combined with winds from the Gulf Coast, the system created rain turning to snow on Saturday morning  for parts of the NY region.

Winter Storm Warnings are posted from 6 a.m. until 7 p.m. Saturday. In Orange County in NY and Sussex County and Warren County in NJ.

A Winter Storm Warning is posted for Sullivan County, NY from 1 a.m. until 7 p.m. on Saturday.

A Winter Weather Advisory is in effect Saturday from 7 a.m. to 7 p.m. for parts of the Hudson Valley.

A Winter Storm Warning is posted for Ulster County, NY from 1 a.m. until 10 p.m. on Saturday.

New York City and most suburbs outside of Long Island and coastal New Jersey are under a Winter Weather Advisory from the storm. New York City's Emergency Management Department issued a travel advisory for Saturday.

"A mixture of rain and snow with high winds is expected Saturday and we advise New Yorkers to make adjustments to their travel plans," Emergency Management Commissioner Zach Iscol said in a statement. "We encourage New Yorkers to use mass transit, allow for extra travel time, and exercise caution." 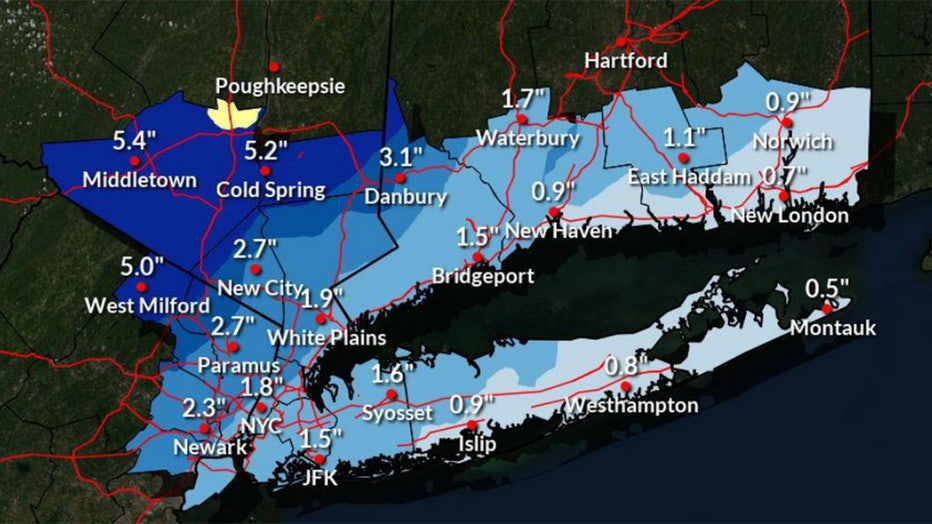 The storm will intensify into a powerful "bomb cyclone" as it blast the East Coast with heavy snow and high winds this weekend, according to FOX Weather.

What is a bomb cyclone?

Meteorologists use the term bomb cyclone to describe a low-pressure system that undergoes "bombogenesis" – defined as a rapid pressure drop of at least 24 millibars in 24 hours or less – indicative of a very intense storm system. In general, the lower the pressure, the higher the strength of the winds.

By Saturday morning, there will be heavy rainfall in New York City, the Jersey Shore, and Long Island.

As cold air rushes in it will push the system into the city for a rapid change over to rain.  Snow accumulation will be about half an inch by the afternoon. Strong winds are expected, too.

- Timing: Rain changes briefly to sleet, then to snow from west to east this morning into this afternoon. Transition begins 11 a.m. -12 p.m. for NYC.

- Snowfall Rates: 1-2"/hr for Orange County and ½" to 1"/hr for the Advisory areas towards mid-day and the early afternoon.

- Gusty Winds: NW winds gust up to 50 mph as the storm pulls away this afternoon into tonight.

Skies should clear out Sunday with temperatures dropping into the upper 30s. Wind chills will be in the low single digits by early Sunday morning.

Parts of the New York area could get sizable amounts of snow.