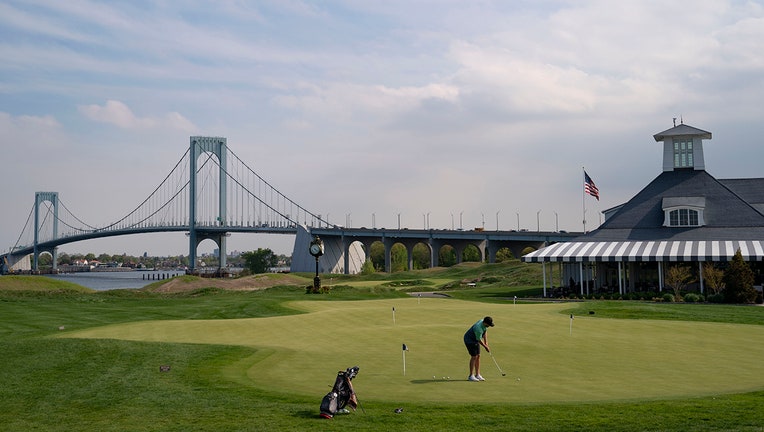 Golfers practice on the putting green near the clubhouse at Trump Golf Links at Ferry Point in the Bronx, N.Y., Tuesday, May 4, 2021. (AP Photo/John Minchillo)

NEW YORK (AP) - Donald Trump has a rich history of fighting back when he's down and making others pay, and that's exactly how he intends to deal with New York City over its plans to fire his company from running a windswept city golf course in the Throgs Neck section of the Bronx.

That abrupt firing was part of the backlash against Trump's businesses over his role in whipping up the mob that attacked the Capitol on Jan. 6. But experts who have reviewed the city's 566-page contract with the ex-president say kicking him off the course may not be so easy.

Trump's son Eric sees the fight as nothing less than a stand against "cancel culture," demanding a payout of more than $30 million from the city to get out of the deal in what could turn into a potentially costly legal battle dragging on for years.

"They can't throw him out so easily," says John Ray, a lawyer with experience in public contract disputes who noted that the Bronx deal gives the famously litigious Trump plenty of room to protest. ''It protects his rights to stay there and run the place."

Geoffrey Croft, president of watchdog NYC Park Advocates, predicts: "The taxpayers are going to get screwed."

In response to questions from The Associated Press, the city referred to legal filings insisting Trump's actions leading up to the riot caused a "plain and irrefutable" breach of the contract and that the Trump Organization's last day running the course will be Nov. 14.

Area landscaper and sometime Trump course golfer Sean DeBartolo, who often drives past the hillside sign spelling out "TRUMP LINKS" in giant stones, says he could offer a temporary solution: Fill in those letters with sod and wait for tempers to cool.

"Worst-case scenario, it's only going to cost a couple of thousand," says the owner of DeBartolo Landscaping in nearby New Rochelle. "It'd be three guys and it'd be done in a day."

The Trump Organization has been reeling after the Capitol riots, with the PGA of America canceling a tournament at one of his New Jersey courses, banks refusing to lend to him and brokers refusing to help find companies to fill retail and office space in his buildings. The hits come as prosecutors pore over his tax returns and big debts loom.

But Trump likes a good fight. And anyone doubting that he can't emerge victorious when he seems washed up should talk to junk bond investors and shareholders in his Atlantic City, New Jersey, casinos, who lost hundreds of millions as he drove them into bankruptcy several times starting in the early 1990s and yet managed to pull out an estimated $80 million for himself.

In 2008, Trump defaulted on a giant Deutsche Bank loan for his Chicago skyscraper, but then sued the bank for "predatory lending" and got it to forgive much of that loan and hand over more than $300 million in a series of new loans. 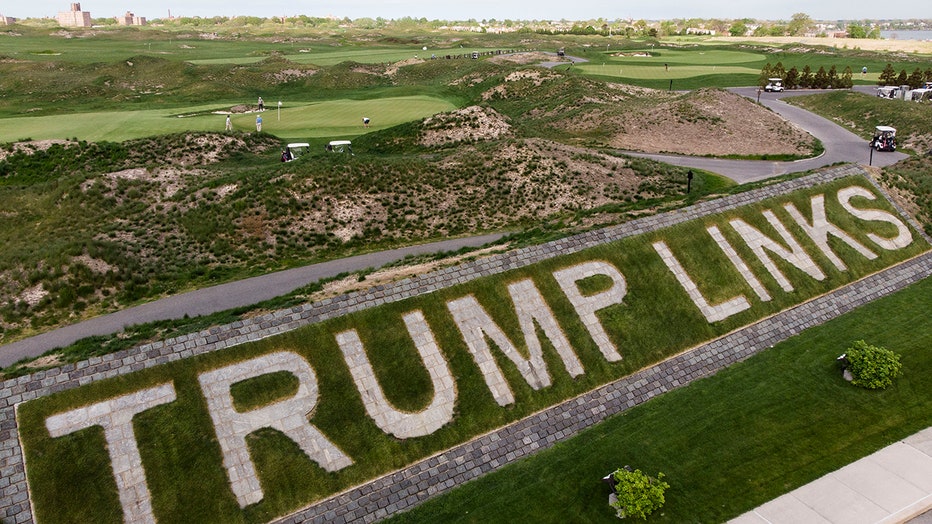 Golfers play at Trump Golf Links at Ferry Point in the Throgs Neck section of the Bronx, N.Y., Tuesday, May 4, 2021. Former President Donald Trump has a history of fighting back and making others pay. That is how he intends to deal with New York City

And after getting blocked from building dozens of homes on golf courses in New York's Westchester County and outside Los Angeles, Trump somehow managed to win more than $40 million in tax breaks for agreeing not to develop the properties despite claiming in separate documents to tax authorities that they were worth a fraction of that. The New York attorney general is investigating whether Trump illegally manipulated the values to gain breaks.

The city isn't the only Trump partner who might be forced to pay up.

Real estate giant Vornado wants to sell two office buildings it owns with Trump — one in New York, another in San Francisco — but finds itself scrambling after potential buyers who didn't want to be seen enriching the ex-president balked at a deal. One solution Vornado has considered: Buy Trump out of his stake, according to The Wall Street Journal, handing the weaker of the two partners a potential cash infusion of more than $700 million as he faces a series of deadlines to pay off debt over the next few years.

The PGA of America may also have trouble extricating itself from Trump. When the group said it was pulling a tournament from his Bedminster, New Jersey, golf course, the Trump Organization warned it was in "breach of a binding contract." The PGA of America did not respond to requests for comment.

"Nothing is more satisfying than prevailing when everybody has said he's lost because he gets to turn to everybody and declare his magical abilities," says Trump biographer Michael D'Antonio. "And, you know, it makes other people look foolish, which he relishes."

When New York City's mayor announced he was kicking Trump off the course, he cited Trump's "criminal action" in inciting Capitol rioters, meaning he could fire him "for cause" and not pay him a dime.

"Inciting an insurrection against the United States government clearly constitutes criminal activity," Mayor Bill de Blasio said in January when he announced he would rip up the 20-year contract with Trump for the course, along with separate ones to run two ice rinks and a carousel in Central Park. "The lawyers looked at it and it was just as clear as a bell that's grounds for severing these contracts."

The city is also citing the PGA tournament cancellation, saying Trump can no longer argue he can attract prestigious tournaments to the Bronx course as is required in the contract.

But the contract makes no mention of "criminal action," and it's not clear that Trump's incitement of his supporters before they stormed the Capitol constitutes one. The contract also doesn't state specifically that Trump is required to attract tournaments, but appears to oblige him only to maintain a course that is "first-class, tournament quality."

The city has responded that the Trump Organization is being "overly restrictive" in its interpretation of those four words, saying it need only show that Trump is incapable of attracting tournaments for whatever reason.

Eric Trump, who runs the company's golf business, declined to comment for this story. But earlier this year, he sent the AP a statement saying the city's decision was "political discrimination" and that it will cost taxpayers at least $30 million for money it had invested in the venue, though that number may be inflated. The city bore the cost of building the course, not Trump, obliging him to spend a minimum of $10 million on a new clubhouse.

The Jack Nicklaus-designed course built on a former landfill features native grasses, rolling hills and dramatic views of the Manhattan skyline and nearby Bronx–Whitestone Bridge. Anyone can play but it costs a hefty $154 on weekdays for residents. The course made cash profits of nearly $700,000 in the year through March 2020 before the pandemic forced it to temporarily close.

A half-dozen golfers at the course earlier this month said that whatever the city has to pay to get out of the deal, it's too much.

"A waste of taxpayer money," says Uri Edell at the sixth hole as his partner thwacked a drive. "I don't care what name is on it."

"Why not take that $30 million and help some people in the streets," he says. "This cancel culture is getting a little carried away, if you ask me."