WASHINGTON - Megan Rapinoe is a decorated champion on the soccer pitch and has been a champion for women seeking equal pay in the workplace.

She continued to carry the cause Wednesday when she testified before Congress in honor of Equal Pay Day. Rapinoe was questioned on the team’s pending equal pay lawsuit.

"Yes, we’re fighting for ourselves and yes, we have our outstanding lawsuit with the federation, but we’re with everyone. We’re with so many women across the country. We’re with so many women who aren’t able to be in this committee hearing, who aren’t able to get the ear of the media, who do not have the bright lights and cameras on them all the time. We are looking to carry this torch for so many other women," Rapinoe said.

Rapinoe and the national team players have been embroiled in a contentious discrimination lawsuit over equal pay with U.S. Soccer. The national team settled its dispute with the federation over unequal working conditions in December, leaving the pay dispute still unresolved.

"We’ve been in this equal pay fight long before our current lawsuit was filed. We tried to go the EEOC (Equal Employment Opportunity Commission) route, we tried to negotiate and time and time again we were told just simply no, the only thing that was going to be available was less and far less, to be honest," Rapinoe said. "So this was the next step we had to take, frankly. I don’t think anyone wants to go into litigation willingly; it’s not a fun thing. But we felt like for our team and future of our sport, this is what we had to do." 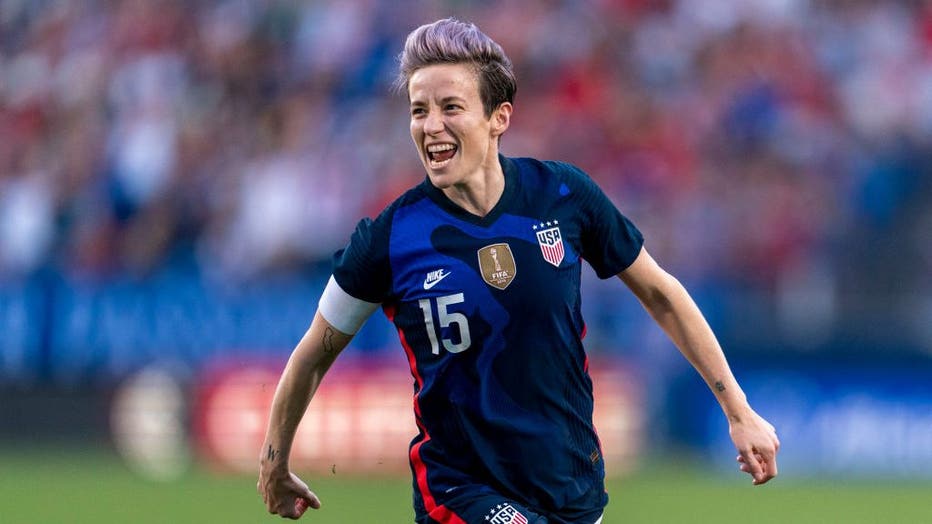 Megan Rapinoe, No. 15 of the United States, celebrates during a game between Japan and USWNT at Toyota Stadium on March 11, 2020, in Frisco, Texas. (Photo by Brad Smith/ISI Photos/Getty Images)

Rep. Carolyn B. Maloney, the Chairwoman of the Committee on Oversight and Reform, invited Rapinoe to the hybrid hearing that was planned to examine the economic harm caused by longstanding gender inequalities.

"We put in just as much work, we train just as hard. We compete to bring trophies back to the United States, bring gold medals back to the United States. We do our jobs and we do it in the best way that we possibly can and for all of us, who work so hard and see how hard the men’s team works and see how hard our teams work and know that that’s equal, it’s just unacceptable that we’re still fighting for equal pay," Rapinoe said.

"And I feel like, honestly, we’ve done everything. You want stadiums filled? We fill them. You want role models for your kids, for your boys and your girls and your little trans kids, we have that. You want us to be respectful, you want us to perform on the world stage, you want us to take the stars and stripes, the red white and blue across the entire globe and represent America in the best way possible - we’ve done all of that. And simply, there’s no reason why we’re underpaid for the exception of gender."

Rapinoe had taken nearly a year off from playing with the national team. She has said part of her reasoning for the break was fear of COVID-19, but she was also exhausted from the whirlwind that came after the U.S. victory in the World Cup in France. Rapinoe earned FIFA Best Player and Ballon d’Or honors following her play in soccer’s premier tournament.

International soccer superstar Megan Rapinoe is exiting this year with a bang after being crowned the 2019 Sportsperson of the Year by Sports Illustrated.

According to a news release published by the committee, women bore a disproportionate burden of care work before the COVID-19 pandemic, held low-wage jobs and were more likely than men to be forced out of employment.

The committee said Wednesday’s hearing was to review reforms that promote an equitable and inclusive economic recovery for women across the country.

It also looked into several reforms, including the Paycheck Fairness Act.

Rapinoe was also questioned about her thoughts on transgender athletes.

When asked by Rep. Scott Franklin of Florida if she felt biological males competing against biological females created an unfair advantage, she replied that it would be "unfair to continue to marginalize anyone by gender."

This story was reported from Atlanta and Detroit. The Associated Press contributed