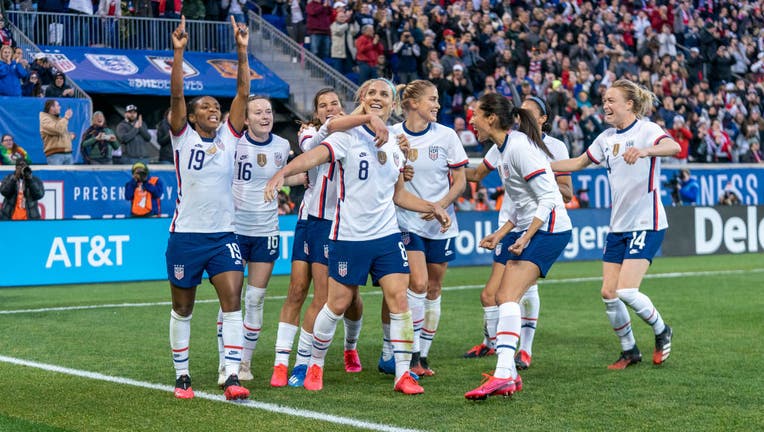 HARRISON, NJ - MARCH 08: Julie Ertz #8 of the United States celebrates with Crystal Dunn #19, Lindsey Horan #9 and Tobin Heath #17 during a game between Spain and USWNT at Red Bull Arena on March 08, 2020 in Harrison, New Jersey. (Photo by Brad Smith

The parties filed a redacted public notice of the settlement with the federal court in Los Angeles on Tuesday while providing the complete agreement to U.S. District Judge R. Gary Klausner. The deal with the world champion American women and the sport's U.S. governing body calls for charter flights, hotel accommodations, venue selection and professional staff support equitable to that of the men's national team.

“I hope that the women and their lawyers see that we are taking a new approach,” said Cindy Parlow Cone, a former player who became the first woman as USSF president in March.

“We want the women’s team as well as their lawyers to see that we want to move in a different direction,” Parlow Cone said. “We want to have a different relationship with them. We want to work together. And I think they’re starting to see that. And we have to continue down this path.”

International soccer superstar Megan Rapinoe is exiting this year with a bang after being crowned the 2019 Sportsperson of the Year by Sports Illustrated.

Players sued the USSF in March 2019 claiming they have not been paid equitably under their collective bargaining agreement that runs through December 2021, compared to what the men's team receives under its agreement that expired in December 2018. The women asked for more than $66 million in damages under the Equal Pay Act and Title VII of the Civil Rights Act of 1964.

Klausner dismissed the pay claim in May, ruling the women rejected a pay-to-play structure similar to the one in the men’s agreement and accepted greater base salaries and benefits than the men, who failed to qualify for the 2018 World Cup.

But Klausner allowed aspects of their allegations of discriminatory working conditions to be put to trial, which had been scheduled for next month. With those issues settled, the players may now ask the 9th U.S. Circuit Court of Appeals to restore the wage claims.

“We are pleased that the USWNT players have fought for — and achieved — long overdue equal working conditions," players' spokeswoman Molly Levinson said. "We now intend to file our appeal to the court’s decision, which does not account for the central fact in this case that women players have been paid at lesser rates than men who do the same job.

"We remain as committed as ever to our work to achieve the equal pay that we legally deserve. Our focus is on the future and ensuring we leave the game a better place for the next generation of women who will play for this team and this country.”

The lawsuit got international attention. Following the U.S. victory in last year's World Cup final in Lyon, France, the crowd chanted “Equal Pay!” as players celebrated on the field.

In May, then-presidential candidate Joe Biden posted to Twitter: “To @USWNT: don’t give up this fight. This is not over yet. To @ussoccer: equal pay, now. Or else when I’m president, you can go elsewhere for World Cup funding,” referring to the 2026 men’s World Cup, set to be co-hosted by the United States, Mexico and Canada.

After the USSF argued in court documents that women lacked the skills and responsibilities of their male counterparts, sponsors criticized the federation. Federation President Carlos Cordeiro resigned in March and was replaced by Parlow Cone until the regular election for a four-year term in 2022.

Parlow Cone said she hopes the agreement leads to settlement of remaining issues.

The USSF agreed to provide equal resources to both the men's and women's teams for chartered flights. The federation also will maintain comparable budgets for accommodations and ensure the women stay in top-quality hotels. Will Wilson, who started as USSF CEO in March, said working conditions of the women will be equal to those of the next labor contract with the men.

USSF will ensure that playing surfaces and venues for women's matches under its control will be similar to those of the men, an issue that arose when the women refused to play a 2015 exhibition against Trinidad and Tobago on artificial turf in Honolulu. FIFA scheduled the 2015 Women's World Cup in Canada on artificial turf but the men's World Cup has been played exclusively on grass.

The federation will provide equal support staffs to both the men's and women's teams.

“Coming to agreement on the working conditions was just the first step,” Parlow Cone said. "The goal for both sides in this was to really define a more structured way to provide both teams, the men and the women, with equitable support, also allowing for flexibility at the same time."

The federation has argued that it cannot pay the women World Cup bonuses matching those of the men because of vastly dissimilar bonus payments for men's and women's tournaments paid to federations by FIFA, soccer's world governing body.

“Our aim is to find the resolution with our women’s national team and we’re committed to doing that. We’ve reached out to them. We’ve offered them the same contract as the men for all games that are controlled by U.S. Soccer,” Parlow Cone said. “But unfortunately, the response has been that they didn’t want to negotiate with U.S. Soccer unless U.S. Soccer was willing to make up the FIFA World Cup prize money, which you all know is the vast majority of the $66 million that they requesting in back pay. And we all know this just isn’t possible from U.S. Soccer’s standpoint to make that up. Even pre-COVID, this would be devastating to our budget and to our programing. But given COVID, not to be overly dramatic, but it would likely bankrupt the federation.”