A dangerous heat wave will continue to linger into midweek for many in the U.S. Midwest and South, with temperatures hitting triple digits in some areas, combined with humidity to make it feel even hotter.

More than 100 million people were expected to be affected by the heat wave and authorities warned residents to stay hydrated, remain indoors when possible, and be aware of the health risks of high temperatures.

Strong storms brought heavy rain and damaging wind to many of the affected areas on Monday, and nearly 300,000 customers remained without power by Wednesday afternoon, including more than 200,000 in Ohio, according to PowerOutage.us.

Excessive heat warnings and heat advisories remained in effect on Wednesday from Michigan to northern Florida, according to the National Weather Service.

Heat index values — which take into account the temperature and relative humidity and indicate how hot it feels outdoors — approached and topped 105 degrees in some locations, including Chicago, the weather service said. 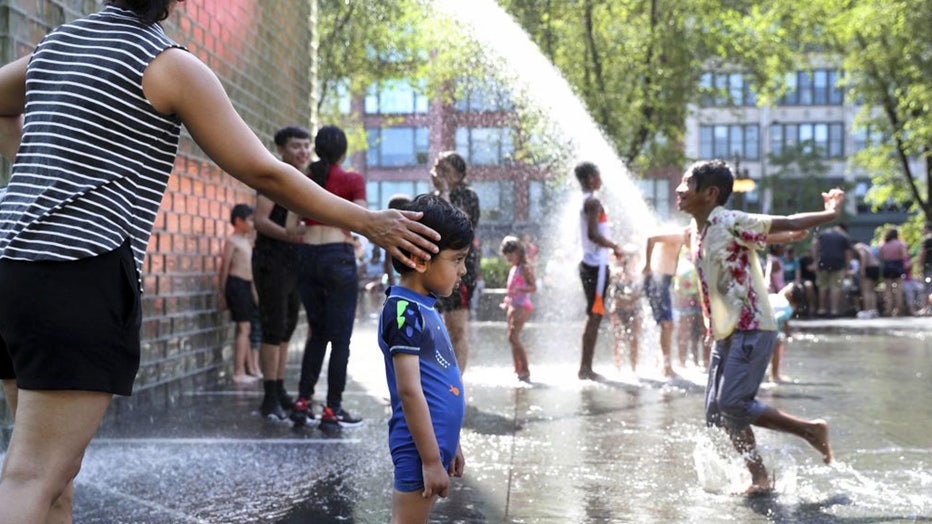 "Full sun today will make it feel even hotter," the weather service wrote. "There will not be much relief for those without air conditioning today through Wednesday night."

Much of southeastern Michigan — from just south of Flint to the state lines with Ohio and Indiana — was put under an excessive heat watch Wednesday through Thursday morning as the warm front is forecast to move east.

During this dangerous heat wave, it'll be imperative to take the proper precautions to stay cool and stay safe.
First off, try to limit the time spent outdoors during excessive heat. The best time to be outdoors would be early in the morning or later in the evening.

If you need to go outdoors during the day, wear loose, lightweight and light-colored clothing and drink plenty of fluids.

Always "look before you lock" to ensure you have not left any children or pets inside a car. Temperatures inside a locked vehicle with the windows rolled up can be deadly.

The Centers for Disease Control and Prevention (CDC) advises being aware of signs of heat stroke, heat exhaustion and heat cramps and knowing what to do in the event of an emergency. The agency compiled a list of symptoms to look for and actions to take for the following:

Heat stroke: A heat stroke may cause body temperatures to spike to 103 degrees Fahrenheit or higher. It can cause hot, red, dry or damp skin; a fast, strong pulse, headache, dizziness, nausea, confusion or even passing out. In the event of a possible heat stroke, you should call 911 right away and move the person to a cooler place. Place the person in a cool bath or use cool cloths to lower their temperature. You should not give the person anything to drink.

Heat exhaustion: Heat exhaustion can cause heavy sweating, cold, pale and clammy skin, fast, weak pulse, nausea or vomiting, muscle cramps, tiredness or weakness, dizziness, headache or passing out. In the event of possible heat exhaustion, the person should be moved to a cool place, loosen clothes, take a cool bath or place cool cloths on body, sip water, and get medical help if symptoms progress, last longer than one hour or cause vomiting.

Heat cramps: Heat cramps may cause heavy sweating during intense exercise and can result in muscle pain or spasms. In the event of heat cramps, stop physical activity and move to a cool place. Drink water or a sports drink and wait for cramps to go away before resuming physical activity. Get medical help if cramps last longer than an hour, you’re on a low-sodium diet or you have heart problems.

What is a heat dome?

According to the National Oceanic and Atmospheric Administration (NOAA), a heat dome occurs after "strong, high-pressure atmospheric conditions" join with influences from the La Niña, climate pattern leading to the creation of vast areas of scorching heat "that gets trapped under the high-pressure ‘dome.’"

The agency said on its website that a team of NOAA MAPP Program scientists had found the main cause of heat domes to be a "strong change (or gradient) in ocean temperatures from west to east in the tropical Pacific Ocean during the preceding winter."

NOAA compared the change to a heated pool, with temperatures rapidly rising in areas around heater jets and more slowly in the rest of the pool.

Then, as winds move the hot air eastward, the northern shifts of the jet stream – a band of strong wind that generally blows from west to east – ensnare it and move it toward land, where it sinks, creating heat waves.

FOX Weather and FOX News contributed to this report.