Curious about what kind of winter the U.S. will see this year? The National Oceanic and Atmospheric Administration’s Climate Prediction Center released its winter weather outlook for the 2021-2022 season — sharing expected temperature, precipitation and drought conditions from December through February.

The report, shared Thursday, anticipates drier, warmer temperatures in the South, a wetter North with a second straight year of La Niña, and drought likely to persist across the West. La Nina, a climate pattern in the Pacific Ocean that can affect weather worldwide, tends to dry out parts of an already parched and fiery American West and boost an already busy Atlantic hurricane season.

NOAA’s prediction center says above-average temperatures are favored across the South and most of the eastern U.S. amid the La Niña climate conditions. 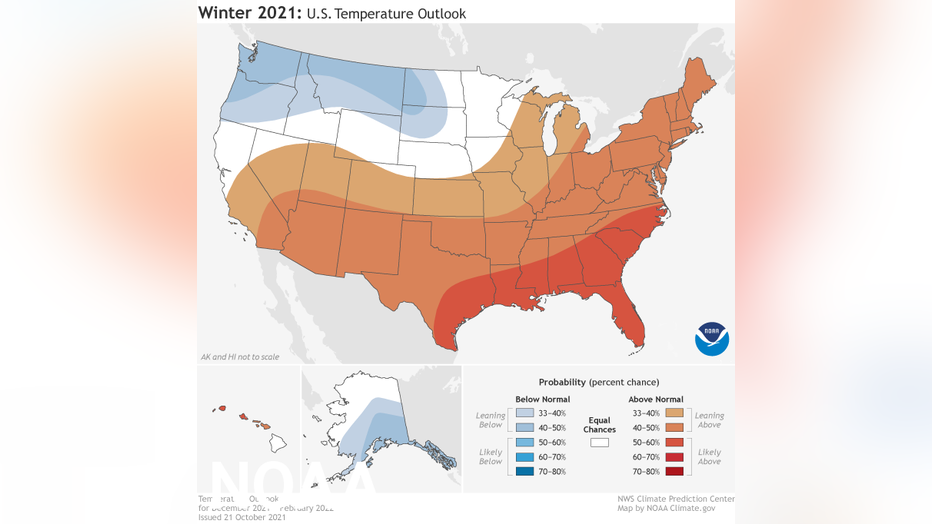 This U.S. Winter Outlook 2021-2022 map for temperature shows warmer-than-average conditions across the South and most of the eastern U.S., while below average temperatures are favored for southeast Alaska and the Pacific Northwest eastward to the Nor

Amid the widespread, ongoing drought that has persisted across much of the country’s western half, NOAA experts said they’re keeping a close eye on the Southwest region.

"The Southwest will certainly remain a region of concern as we anticipate below-normal precipitation where drought conditions continue in most areas," said Jon Gottschalck, chief of NOAA Climate Prediction Center’s Operational Prediction Branch.

NOAA’s outlook says warmer-than-average conditions are most likely across the southern tier of the U.S. and much of the Eastern U.S., "with the greatest likelihood of above-average temperatures in the Southeast."

Meanwhile, below-average temperatures are expected for southeast Alaska and the Pacific Northwest eastward to the northern Plains.

The Upper Mississippi Valley and smaller areas of the Great Lakes have equal chances for below-, near- or above-average temperatures, the outlook says.

The Pacific Northwest, northern Rockies, Great Lakes and parts of the Ohio Valley and western Alaska have the greatest chances for wetter-than-average conditions, NOAA experts say.

Drier-than-average conditions are expected in south-central Alaska, Southern California and throughout the Southwest, as well as the Southeast.

The forecast for the remainder of the U.S. shows equal chances for below-, near- or above-average precipitation during winter months, NOAA says.

NOAA’s outlooks do not predict seasonal snowfall accumulations, as snow forecasts are generally not predictable more than a week in advance, officials say.

"Severe to exceptional drought" will continue to dominate the western half of the continental U.S., Northern Plains, and the Missouri River Basin, NOAA’s outlook says.

These drought conditions will also persist and develop in the Southwest and Southern Plains, according to forecasters.

On a positive more note, the Pacific Northwest, Northern California, the upper Midwest and Hawaii are the most likely to experience "drought improvement," NOAA says.