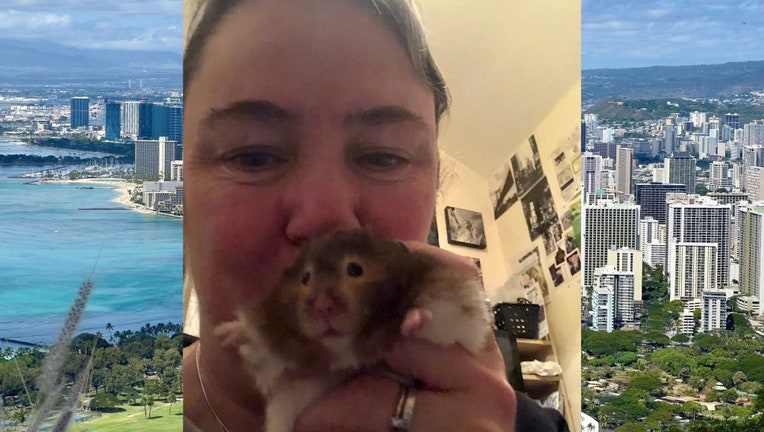 BIRMINGHAM, United Kingdom - Lisa Murray-Lang could only think of one place to say goodbye to her pet hamster, Spud.

Even if that meant hopping on a plane and flying more than 7,000 miles across the world.

The pet owner said she got the idea during the COVID-19 lockdown. She would create makeshift sets out of cardboard for Spud to "travel." One of those sets was modeled after Hawaii, complete with miniature plastic palm trees and lawn chairs.

Some places Spud has "traveled" to during the COVID-19 lockdown.  (Lisa Murray-Lang)

She also re-created various landmarks around the United Kingdom including the fictional Hogwarts University, "Hamwarts," from the movie/book franchise "Harry Potter."

"One of his most favorite adventures was Hawaii," she told FOX Television Stations. "He loved the sun and the sand! We were surrounded by 4 feet of snow so it cheered us all up!"

She then decided to make the trip a reality as a way to pay her final respect.

During the ceremony in Hawaii, Murray-Lang said she played Beyonce’s "I Was Here" and wrote his name in the said.

"I am safe in the knowledge he’s happy in paradise rolling around in the sand," she continued. "I kept a little of his ashes in a necklace urn, so he’ll always be with me."

Murray-Lang said she had Spud six months before the COVID-19 lockdown in March 2020.

She said when he died, he was three years and seven months old, which is about 138 human years. She said the average age of a hamster is two and a half years.

RELATED: Eclipse the dog, famous for riding Seattle buses by herself, dies at age 10

"He was amazing!" she continued. "In a very dark and scary time, he brought some sunlight and laughter. Not just to me but because of the internet around the world!"

Murray-Lang said her favorite memory is "how he gave me purpose and a reason for getting up on a morning when my work as a self-employed pet sitter stopped! It was a very scary and frightening time!"