When Hailey Thomas and her family headed to a renowned lake in Idaho to fish and enjoy a beautiful afternoon, she never thought she’d come home a state record holder.

Despite the beautiful weather, Hailey and her husband Shane, himself a veteran angler and former state-record holder, weren’t having much luck on Henrys Lake, according to the Idaho Fish and Game Department. They decided to raise the anchor and try again somewhere else on the lake, but then Hailey hooked something. And it was heavy.

After a "stressful" minute, Hailey and Shane reeled in a rainbow/cutthroat hybrid trout so big it hardly fit in the net they used to scoop it up.

"That's the biggest trout I've seen in my life!" Shane yelled as they got the fish into the boat's live well.

The couple had a feeling they landed "something special," and they were right. At 36 inches long and 17-20 pounds, the catch broke the state record for the largest catch-and-release trout ever caught. After a few photos, "Hailey released the lunker trout back to the lake to fight another day." 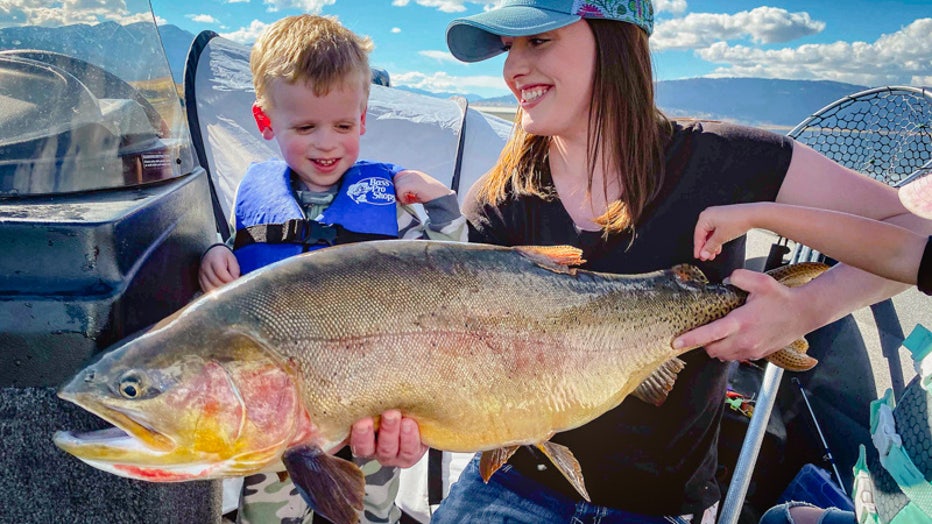 "Hailey did a phenomenal job fighting the fish and keeping it out of the abundant weeds, notorious for knocking large trout off the line," Shane said.

Idaho fish and game officials said Henrys Lake, an alpine lake in eastern Idaho, is known for producing trophy-sized trout. The best time for trout-fishing there is spring and fall, but they said weather conditions can be "challenging."