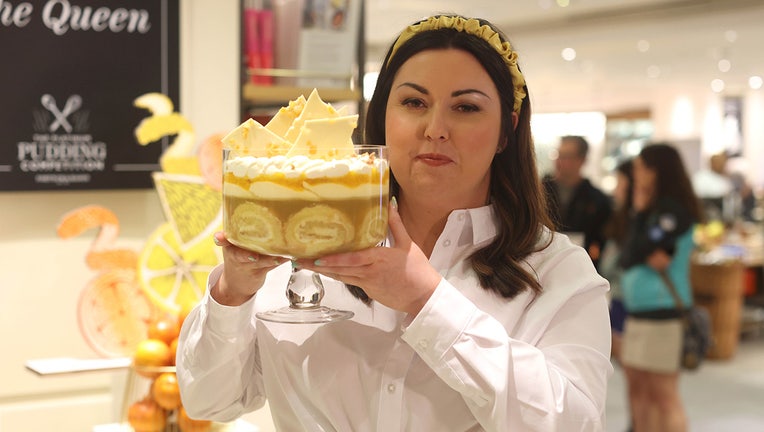 Jemma Melvin in Fortnum and Mason, central London, with her lemon Swiss roll and amaretti trifle that beat 5,000 desserts to become the official pudding of the Queen's Jubilee celebrations. Picture date: Friday May 13, 2022. (Photo by James Manning/P

A 31-year-old copywriter's seven-layer lemon Swiss roll and amaretti trifle beat 5,000 desserts in a U.K.-wide competition to become the official pudding — or dessert, if you’re not British — of the Queen’s Platinum Jubilee.

Melvin, who is from Southport in northwest England, said her creation was inspired by both her grandmothers and the queen.

"This particular trifle is a tribute to three women: it’s my Gran, my Nan and the queen herself," she said. "My grandma taught me to bake, she taught me all the elements, everything from scratch. My Nan’s signature dish was always a trifle; we used to call her the queen of trifles. And the queen had lemon posset at her wedding."

The contest was announced in January as Jubilee organizers sought to find a modern-day counterpart to coronation chicken, the combination of cold poultry, mayonnaise and curry powder created for festivities on the day in 1953 when Elizabeth was crowned.

The winner was announced by the Duchess of Cornwall, Prince Charles’ wife, on Thursday night in a nationally televised broadcast on the BBC. Organizers later posted the recipe online so anyone who wanted to try making it could have the precise directions to hand.

Melvin’s trifle defeated four other finalists: a passionfruit and thyme frangipane tart; Queen Elizabeth sponge cake, including a layer of jam made with the monarch’s favorite Dubonnet wine; a rose falooda cake incorporating the flavors of a traditional Indian dessert; and a "four nations" pudding featuring ingredients from around the country.