In quite possibly the biggest blow to President Trump yet, Twitter permanently suspended his account on Friday.

NEW YORK - Two days after locking President Donald Trump's account for 12 hours, Twitter has permanently barred the president after a "close review" of tweets from the handle @realDonaldTrump due to the "risk of further incitement of violence," the company said in a statement.

"In the context of horrific events this week, we made it clear on Wednesday that additional violations of the Twitter Rules would potentially result in this very course of action. Our public interest framework exists to enable the public to hear from elected officials and world leaders directly. It is built on a principle that the people have a right to hold power to account in the open," Twitter said in a blog post on Friday. "However, we made it clear going back years that these accounts are not above our rules entirely and cannot use Twitter to incite violence, among other things. We will continue to be transparent around our policies and their enforcement." 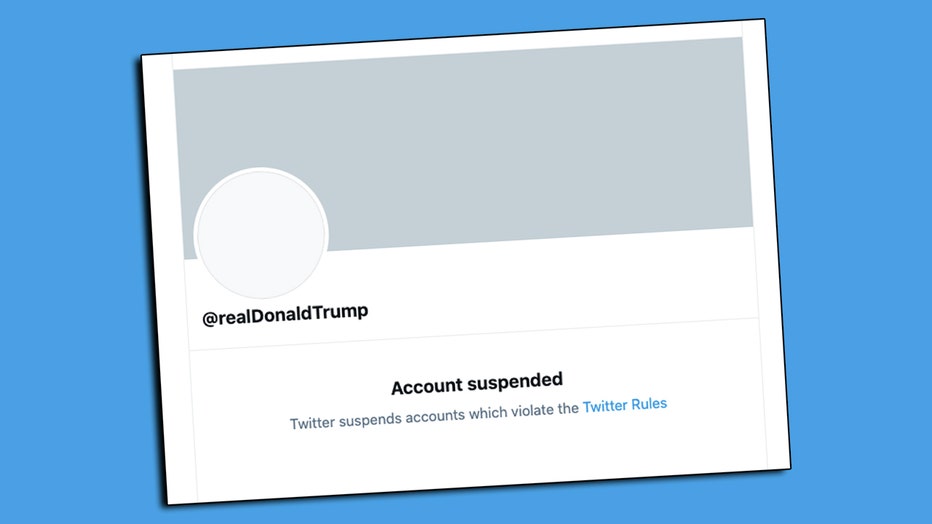 Thousands of pro-Trump supporters converged on the nation's capital on Wednesday to protest the formalization of Joe Biden's victory in the presidential race. Trump appeared at a rally near the White House in the afternoon and stirred up the crowd with his continued baseless claims of election fraud.

Then as a joint session of Congress got underway to count the Electoral College votes, rioters swarmed the U.S. Capitol and clashed with police. Many of them pushed past barricades and officers and breached the building.

Video footage from that day shows police officers in the Capitol either struggling to contain the mobs or simply allowed rioters to freely roam the building.

A plainclothes police officer fatally shot a woman who was attempting to climb through an opening into the Speaker's Lobby outside the House chamber.

Another police officer was hit in the head by a fire extinguisher and later died.

In its blog post, Twitter said that these two @realDonaldTrump Tweets posted on Friday were "highly likely to encourage and inspire people to replicate the criminal acts that took place at the U.S. Capitol" on Wednesday:

Twitter said that in the "broader context" of what is happening in the United States right now as well as how Trump can and does influence his audience's actions, the language of these Tweets violated the platform's Glorification of Violence policy. Twitter further elaborated upon its reasoning in the blog post.

In the wake of the president's apparent role and influence in this week's violent mayhem, a number of his staff and Cabinet members have resigned. Democratic leadership and at least one Republican senator are calling for Trump to either resign or be removed from office even before his term ends on Jan. 20.