In an unprecedented move, Twitter announced that it had deleted three of President Donald Trump's posts and had locked his account for 12 hours in connection with the ongoing unrest and violence in Washington, D.C., on Wednesday.

Thousands of pro-Trump supporters converged on the nation's capital on Wednesday to protest the formalization of Joe Biden's victory in the presidential race. Trump appeared at a rally near the White House in the afternoon and stirred up the crowd with his continued baseless claims of election fraud.

Then as a joint session of Congress got underway to count the Electoral College votes, protesters swarmed the U.S. Capitol and clashed with police. Many protesters pushed past barricades and officers and breached the building. 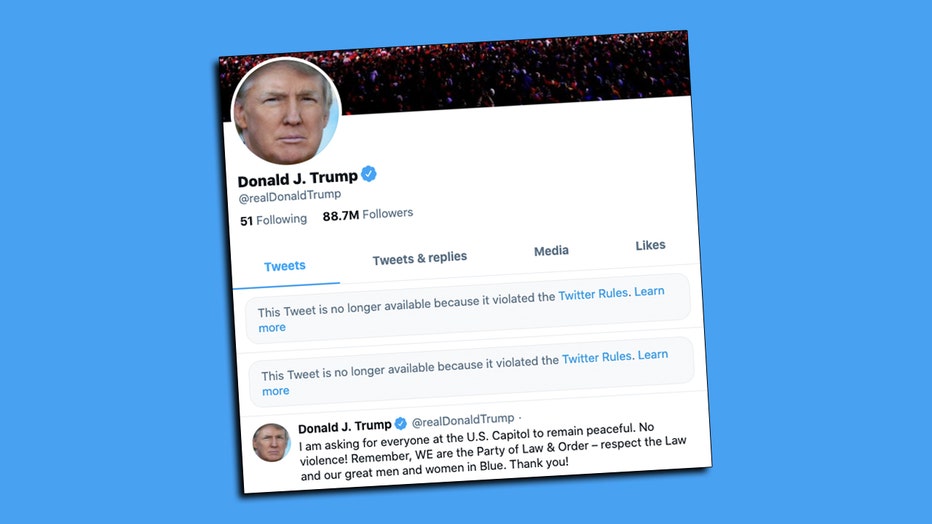 "As a result of the unprecedented and ongoing violent situation in Washington, D.C., we have required the removal of three @realDonaldTrump Tweets that were posted earlier today for repeated and severe violations of our Civic Integrity policy," the company announced. "This means that the account of @realDonaldTrump will be locked for 12 hours following the removal of these Tweets. If the Tweets are not removed, the account will remain locked."

"I know your pain. I know your hurt. But you have to go home now," Trump said in the video. "We can't play into the hands of these people. We have to have peace. So go home. We love you. You're very special."

Facebook and YouTube soon announced that they had deleted the video but Twitter initially left it up but prevented it from being shared. Soon Twitter reversed course and removed it as well as two more Tweets.

In one of the removed Tweets, Trump apparently called Vice President Mike Pence a "traitor," according to accounts on social media.