It started months before Election Day with false claims on Facebook and Twitter that mail-in ballots cast for President Donald Trump had been chucked in dumpsters or rivers.

Now, a week after the final polls closed, falsehoods about dead people voting and ballots being thrown out by poll workers are still thriving on social media, reaching an audience of millions. Trump and his supporters are pointing to those debunked claims on social media as a reason to not accept that Democrat Joe Biden won the election.

"These will probably persist for years or even decades, unfortunately," Kate Starbird, a University of Washington professor and online misinformation expert, said of the false claims about the U.S. election process. "People are very motivated to both participate in them and believe them."

There is no evidence of widespread fraud in the 2020 election. In fact, voting officials from both political parties have stated publicly that the election went well and international observers confirmed there were no serious irregularities. 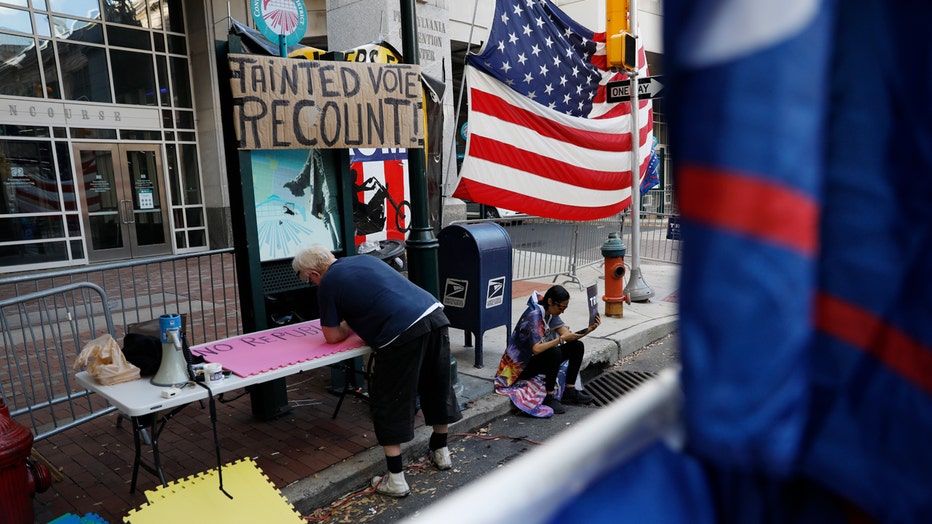 A man makes signs as a handful of supporters of President Donald Trump continue to protest outside the Pennsylvania Convention Center, in Philadelphia, Tuesday, Nov. 10, 2020. (AP photo)

The issues raised by Trump's campaign and his allies are typical in every election: problems with signatures, secrecy envelopes and postal marks on mail-in ballots, as well as the potential for a small number of ballots miscast or lost. With Biden leading Trump by substantial margins in key battleground states, none of those issues would have any impact on the outcome of the election. Many of the legal challenges brought by Trump's campaign have been tossed out by judges, some within hours of their filing.

But Trump, who primed his supporters for months to doubt this election's outcome with false tales of ballots being "dumped in rivers" and baseless tweets warning of a "rigged election," has continued his assault on the U.S. vote in more than 40 Facebook and Twitter posts since Election Day.

"This was a stolen election," Trump tweeted on Sunday, the day after Biden became president-elect.

Conservatives are flocking to Parler, a social media platform that doesn't moderate content as closely as Facebook, Twitter and other popular apps. That has resulted in the spreading of misinformation about the presidential election.

Tweets and retweets with terms such as "steal," "fraud," "rigged" and "dead" referring to the election spiked more than 2,800% from Nov. 2 to Nov. 6, according to an analysis by VineSight, a tech company that tracks misinformation. The company found more than 1.6 million retweets containing some of those words on Nov. 6 alone.

The false claims have shapeshifted over the last week, ranging from misleading assertions that ballots filled out with Sharpie pens in Illinois, Arizona and Michigan were thrown out to an inaccurate social media post from Eric Trump that the number of ballots cast in Wisconsin exceeded the number of registered voters.

In recent days, prominent Republicans and Trump allies have peddled social media claims that hundreds or thousands of dead people voted in key battleground states like Pennsylvania or Michigan.

One tweet, shared more than 50,000 times, falsely claimed that a dead woman named Donna Brydges voted in the election. Brydges is very much alive, she confirmed to the AP by phone last week. In fact, she had "just beat me in a game of Cribbage," her husband told a reporter.

Between Election Day and Monday, roughly 5 million mentions of voter fraud and "Stop the Steal" were made across social media and online news sites, with most of the claims focusing on closely contested states like Pennsylvania, Georgia and Michigan, according to an analysis by media intelligence firm Zignal Labs. Mentions of voter fraud have not waned since final votes were cast Tuesday.

Last week, as Biden pulled ahead in the race, Trump supporters quickly launched dozens of "Stop the Steal" groups on Facebook and began using the platform to organize "Stop the Steal" rallies.

The social media platforms have tried to rein in the false claims.

Facebook quickly shut down one "Stop the Steal" Facebook group, which ballooned to more than 350,000 members in just one day, after some called for violence in it, and has taken down additional "Stop the Steal" groups. And over the last week, Twitter has covered nearly a dozen of the president's tweets that make false or unproven claims that voter fraud occurred.

Parler has fewer than 8 million users, but its reach is quickly growing. As of Tuesday, Parler was the most downloaded app in Apple's store, followed by MeWe. Newsmax, a conservative cable network, was in fourth place. According to Sensor Tower, which tracks such data, Parler was downloaded over 2 million times on Apple and Android in the U.S. from Nov. 3 to Nov. 9. This is more than 31 times the downloads it saw in the prior week. In that same period, Newsmax saw 583,000 installs, up more than 11 times from the previous week. MeWe hit 218,000 installs, more than 14 times the 15,000 installs it saw in the previous week.

The conversation on Parler has centered around voter fraud and an election stolen from Trump over the last week.

"Show the world we won't let communist steal the White House," one Parler user wrote Tuesday, in one of many thousands of posts using the hashtag #StopTheSteal.

That migration of social media users could be one drawback of the good job Facebook and Twitter did fact-checking and removing false content around the U.S. election, Starbird, the misinformation expert, noted.

"What they tried to do is commendable, which is why people are moving to other platforms," Starbird said.