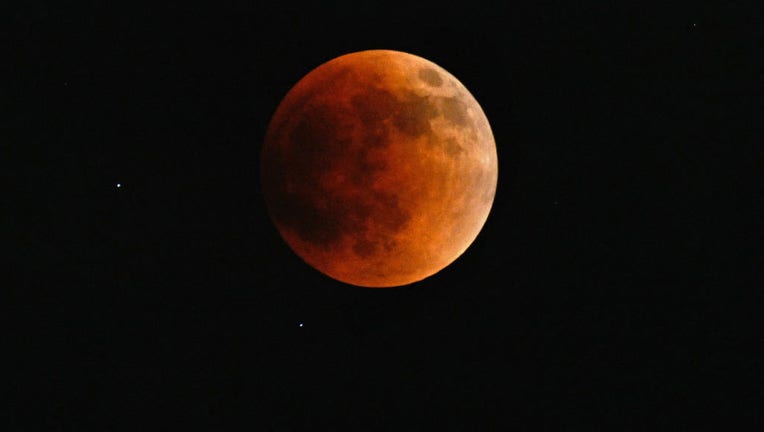 Stargazers who stayed up overnight had the chance to see a total lunar eclipse this past weekend.

For those on eastern time, the best part of the eclipse started around 10 p.m., FOX Weather reported, when the darkest part of the shadow began to create a noticeable change in the moon’s light.

Around 11:30 p.m. ET is when the main part of Earth’s shadow fell over the moon, known as totality. Just after midnight ET, the deepest eclipse was visible. The eclipse ended just before 3 a.m. Monday.

The eclipse was visible to most of the Americas, western Europe and most of Africa.

Anza-Borrego Desert State Park in California shared a live video of the eclipse, displaying the moon in a reddish hue.

Skywatchers across the U.S. and in much of Europe and Africa were able to marvel on the night of May 15-16, 2022, as a total lunar eclipse turned the moon a reddish hue. Credit: Anza-Borrego Desert State Park via Storyful

The National Weather Service station in New Braunfels, Texas, posted this timelapse video of the event on the night of May 15-16, 2022, as a total lunar eclipse turned the moon a reddish hue.

A "blood moon" occurs during a total lunar eclipse, which is when Earth lines up between the moon and the sun to hide the moon from nearly all of the sunlight but allow just enough light through to turn the moon a deep red color.

But as astronomer Derek Demeter told FOX Weather, it may be time to rebrand total lunar eclipses as "rainbow moons."

If you get the chance to watch a total lunar eclipse through a telescope, there are even more colors of the rainbow to see besides red.

People take in the view from Griffith Park while a total lunar eclipse creates a "super blood moon" on May 15, 2022, in Los Angeles, California. (Photo by Mario Tama/Getty Images)

Unlike a solar eclipse, you don't need special glasses or protective lenses to watch a total lunar eclipse — only a clear sky.

Space enthusiasts have also begun counting down the days until the next total solar eclipse, taking place in the U.S. on April 8, 2024. Large parts of the country will be cast in the complete shadow of the moon that day.