The Biden administration announced that four families that had been separated at the border will be reunited.

LA JOYA, Texas (AP) - Marely had traveled for 13 days, trekking with her mother from Central America to the busiest corridor for illegal U.S.-Mexico border crossings. Then, as the 12-year-old Salvadoran girl got on an inflatable raft to cross the Rio Grande in Texas in the middle of the night, she discovered her mom wasn’t coming with her.

Her mom told her that she loved her very much right before the boat got pushed into the water.

"I thought she had already gotten on, but she hadn’t," Marely told The Associated Press this week, tears rolling down her cheeks.

But she didn’t scream or ask the smugglers to go back and get her mother.

"I knew she was on the other side. There was no going back. They told us to run, to keep going," said Marely, who turned herself over to Border Patrol agents in La Joya, Texas.

The AP is not using the girl’s last name. It does not normally name children without permission from their parents, and the identity of her parents could not be obtained.

Growing numbers of migrant families are making the heart-wrenching decision to separate from their children and send them into America alone. Many families with kids older than 6 have been quickly expelled from the country under federal pandemic-related powers that don't allow migrants to seek asylum. But they know that President Joe Biden's administration is allowing unaccompanied children to stay in the U.S. while their cases are decided.

Forced out of the country, they are sending their older children, like Marely, back to cross alone. These self-separations mean children arrive in the United States confused and in distress. Many have traveled hundreds of miles with their parents without understanding why they can’t cross the last stretch together. 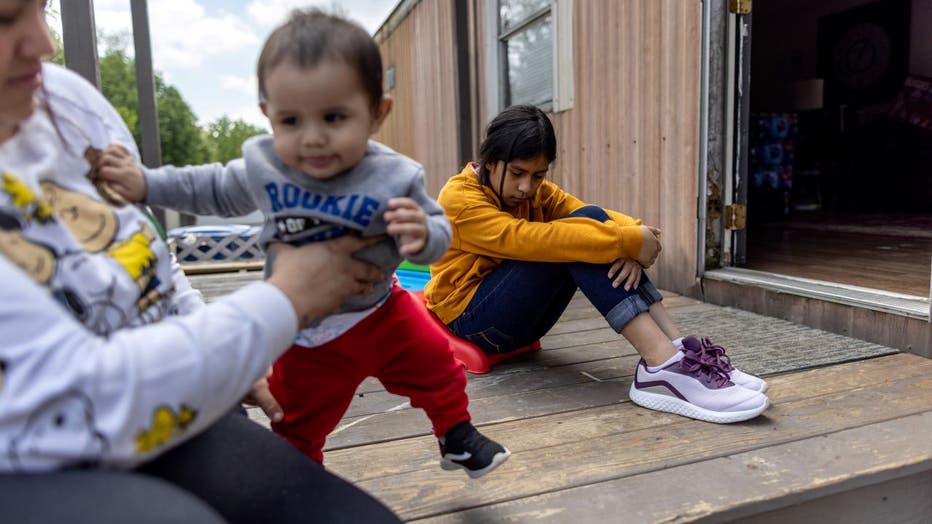 Honduran immigrant Nani, 10, pauses after moving in with her extended family on April 25, 2021 in Sellersburg, Indiana. (Photo by John Moore/Getty Images)

Once in the U.S., Marely joined two teenagers traveling without their parents and a larger group of families fleeing poverty, storm devastation and violence in their homelands. For two hours, the girl from a village south of San Salvador walked as a thunderstorm brewed overhead in the vast Texas’ Rio Grande Valley, a busy stretch for river crossings.

Marely’s mother had her memorize the full name and number for her grandmother in Washington, D.C., who told the AP she was expecting to receive her granddaughter.

As more families decide to send their children alone, Homeland Security Secretary Alejandro Mayorkas has been pressed by lawmakers about the possibility that expulsions could be a "new source of family separation." It follows widespread outrage over former President Donald Trump's "zero tolerance" policy that forced apart families on the border, some of whom still haven't been reunited.

Mayorkas has defended speedy family expulsions, saying they protect both the American public and migrants. He said officials are "hearing anecdotally" of families who self-separate and added that about 40% of unaccompanied children have a parent or legal guardian in the U.S. and 50% have other relatives who can take care of them after they are released from government custody.

April was the second-busiest month on record for unaccompanied children encountered at the border — 17,171 were stopped — following March’s all-time high of 18,960, according to U.S. Customs and Border Protection.

Agents about 250 miles (400 kilometers) south in La Joya, Texas, late Wednesday came across an 8-year-old Honduran girl named Emely, who had been walking in the brush for six hours with a group of strangers and had lost a shoe in the mud. She was sobbing uncontrollably because she lost the number of her mother who she says was expecting her in the U.S. and didn't know where she lived.

Emely had lost sight of a fellow migrant who had her contact information, but the mother saw an AP photograph of her arrival on the Spanish-language broadcast Univision and contacted the network.

In an encampment in the Mexican border city of Reynosa, near where Marely last saw her mother, the numbers of expelled migrant families are growing. And they are making desperate decisions.

Jose Rodriguez, 41, of San Pedro Sula, Honduras, has been staying under a gray tarp with a group of Hondurans, but he hasn't been able to sleep since he sent his 8-year-old son in mid-April with a distant cousin to cross the river into Roma, Texas.

Rodriguez had tried to cross the border with his son Jordyn, but the two were expelled in early March. They had no money and no way to return home.

"As a parent, it is very difficult. I do not wish this upon anyone. There are people who ask me if I sent my son. ‘Yes,’ I tell them, ‘but don’t do it,’" Rodriguez said. "You need to have a lot of faith and cling to God in order not to fall apart. If you are weak, you may pass out, and if you have heart disease, you may die. It is very hard."

His wife, who stayed behind in Honduras with their 1-year-old, initially opposed sending Jordyn to cross the border alone, but Rodriguez persuaded her. He told her their lives in Honduras would only get worse, with the threat of gangs and the economy hard hit by the coronavirus pandemic and two tropical storms.

To pay the smugglers’ fees for his son’s solo attempt, Rodriguez washed dishes at a taco stand near the encampment for a month and a half. It also took some convincing to get Jordyn to go.

"You have to keep going. You will have the best clothes, the best computer and tennis shoes, and toy cars that light up," Rodriguez said he told his son when they said goodbye.

For four days, Rodriguez says he walked around the plaza, stopping every couple of steps to cry, until he received a recorded audio message from a cousin in the U.S. whose number he had written on Jordyn’s birth certificate.

"I have good news for you. They have the boy in a home for children his age," the cousin said.

Social workers now call Rodriguez from a shelter in Chicago twice a week to see if there is anyone Jordyn can stay with in the U.S. Relatives said they could not take care of Jordyn because they also were recent immigrants and had their own children to support.

"To this day I do not sleep. The food doesn’t taste of anything, because I think of this every single moment," Rodriguez said. "What I want is to be with him."