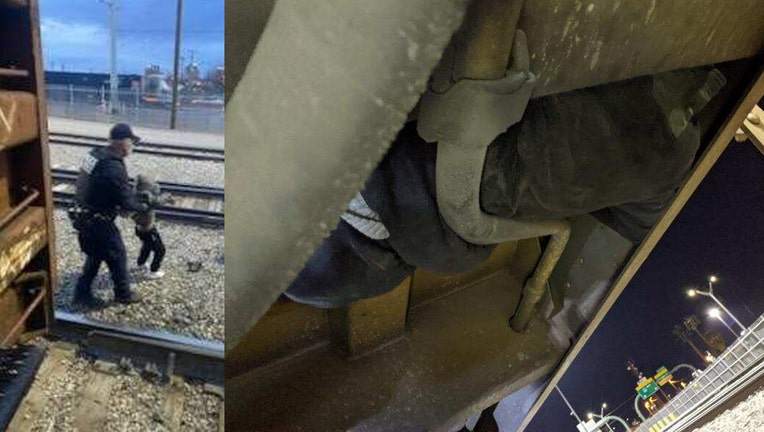 A CBP Officer removes a child from a train (left) and a person hiding inside a train in CBP photos.

Authorities say they are seeing a dangerous spike in people hiding on freight trains in an effort to sneak into the United States.

U.S. Customs and Border Protection (CBP) officials say people are hiding on almost every train they inspect that arrives in El Paso, Texas.

Since the beginning of the current fiscal year, agents have removed 292 undocumented migrants from trains. That is up more than 60 percent when compared to the 181 noncitizens CBP officers apprehended during the same timeframe a year ago.

In all of the fiscal year 2019, CBP officers encountered only 50 people who attempted to enter the U.S. via rail crossings.

Authorities say a majority of the people they are catching are from Mexico and Central America.

"We cannot stress how dangerous of a practice this is," said CBP Director of Field Operations Hector Mancha. "People are climbing on rail cars and hiding in places not designed to accommodate human beings."

Most of the rail crossings take place between midnight and 6 a.m. so as to not impact street traffic in Juarez.

"The potential for a misstep is greater when it is dark and visibility is limited," said Mancha. "

CBP Officers process arriving railcars at the Burlington Northern Santa Fe and Union Pacific crossings on either side of the Paso Del Norte international bridge.  They say every arriving rail car is examined using x-ray technology.

CBP officers also visually inspect the rail cars as they slowly enter the U.S. from Mexico. Often they are supported by canine teams.

Migrants have been found riding on top of rail cars, holding onto the undercarriage, and even within new vehicles that are being shipped north.

Approximately 6,500 rail cars enter El Paso from Mexico on a monthly basis, according to authorities.