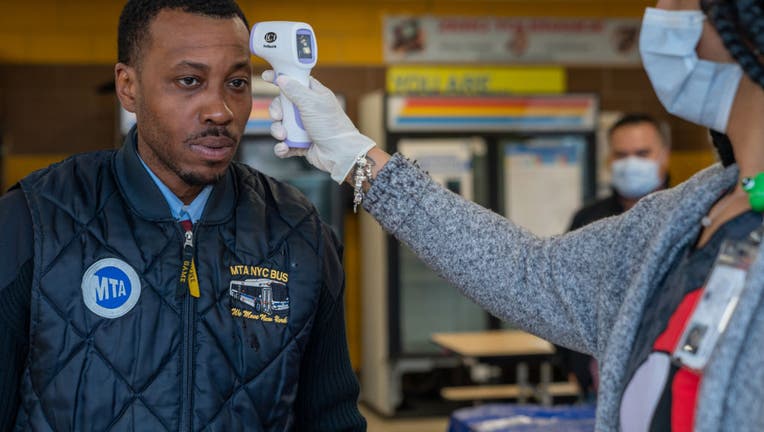 John Tolbert an MTA bus driver has his temperature taken before starting his shift at the West Farms Bus Depot on April 10, 2020 in New York City. (Photo by David Dee Delgado/Getty Images)

NEW YORK - Transit officials say they’re working harder than ever to protect their own workers amid the coronavirus pandemic that has killed more than 7,000 New Yorkers in just a few weeks.

The virus has also taken the lives of 41 Metropolitan Transportation Authority employees.  The MTA runs the city's buses and subway as well as many commuter trains.

The MTA has sought to help protect employees by distributing 300,000 medical-grade masks, 160,000 surgical masks, and 2.5 million pairs of gloves to its employees since March 1.

A so-called "Temperature Brigade" has started taking the temperatures of every employee before they begin their shift.  The workers with the MTA's Hazmat Response Team log all of the temperatures.

The use of all forms of mass transit has plummeted in New York City.

Ridership on the subways Monday was down 92% compared to a normal weekday. The commuter rail lines serving Long Island had 97% fewer passengers. On Metro-North, which serves the city's northern suburbs, including those in Connecticut, ridership was down 95%. On MTA buses, it is down more than 60%.

The agency has cut back bus service by about 25%, reduced the number of trains running on weekdays on the Long Island Rail Road from around 740 to around 500 and on Metro-North from 713 to 424.

While subways and buses are all far less crowded than normal, there are still moments that are too close for comfort in the age of coronavirus.