A large storm system is set to move over the eastern U.S. on Friday and into the weekend, bringing with it heavy rain, gusty winds and the threat of coastal flooding, forecasters said.

Thunderstorms were expected in the Southeast and Mid-Atlantic on Friday, according to the National Weather Service.

Flash flooding is a concern from northern Virginia into eastern West Virginia, south-central Pennsylvania and much of Maryland, forecasters said. Heavy downpours could yield up to 1 inch of rain per hour on Friday morning and afternoon in some areas.

Water in some areas is already running high due to runoff from the powerful nor’easter that affected the Northeast earlier this week. In the Washington, D.C. region, forecasters said strong onshore gusts of 40 to 50 mph will push water up the Bay and Tidal Potomac, which could potentially produce the highest water levels in several years. 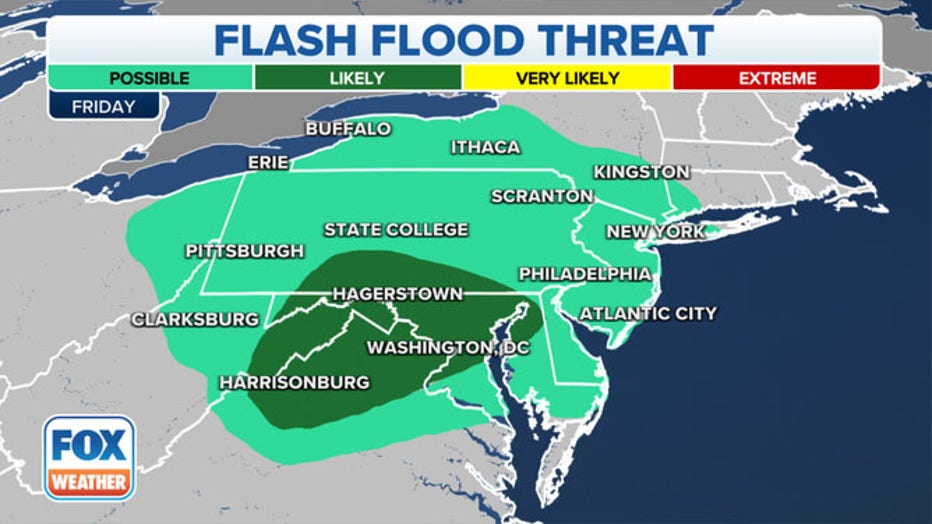 Overall, heavy rain and some thunderstorms are likely from the Mid-Atlantic through New England on both Friday and Saturday, the National Weather Service said.

The heaviest rain will later shift into New England and New York state by Saturday — and some areas of New England could see up to 2 to 4 inches of rainfall, forecasters said.

Easterly wind gusts of 50 to 60 mph are expected Friday and Friday night, which could knock down tree limbs and lead to a few power outages. The strongest winds will be along the immediate coastline, where power outages could be more widespread, according to FOX Weather.

The National Weather Service has issued Wind Advisories and High Wind Warnings for parts of the mid-Atlantic through early Saturday morning.

Forecasters said "strong, gusty onshore winds will also lead to some coastal flooding for the Chesapeake Bay and the Atlantic Coast of Virginia northward to New Jersey through Saturday afternoon."