The LGBTQ community, the ceremonial groundbreaking for the Stonewall National Monument visitor center is a step toward the future but also a look at the past.

NEW YORK - For the LGBTQ community, the ceremonial groundbreaking for the Stonewall National Monument visitor center in Greenwich Village on Friday was a step toward the future but also a look at the past.

The center, which will be built next door to the historic Stonewall Inn, is expected to open in summer 2024, according to Ann Marie Gothard, board president of Pride Live, an advocacy group that will help manage the center with the National Park Service.

"The opening of the Stonewall National Monument Visitor Center is a remarkable moment in the history of Stonewall," Gothard said. "We honor all those who came before us, most especially the queer people fighting for equality at the Stonewall riots."

The Stonewall National Monument, which was dedicated in 2016, was the first U.S. national monument dedicated to LGBTQ history. It is based in tiny Christopher Park, across the street from the Stonewall Inn, where patrons fought back against an NYPD raid on June 28, 1969, and helped spark the contemporary LGBTQ rights movement. (New York City donated the park to the federal government for the establishment of the monument.)

At Friday's visitor center groundbreaking, FOX 5 NY's Stephanie Bertini interviewed a man in his 80s who goes by the name Tree, who was a bartender at the Stonewall Inn long before gay rights were established.

"I went to jail so many times just for being in a gay bar," he said.

Tree lived through the Stonewall uprising, the time in history when the LGBTQ community stood up to the law and pushed back.

"The night of the rebellion, I was in there dancing," Tree said. "We heard screaming and we knew it was another raid." 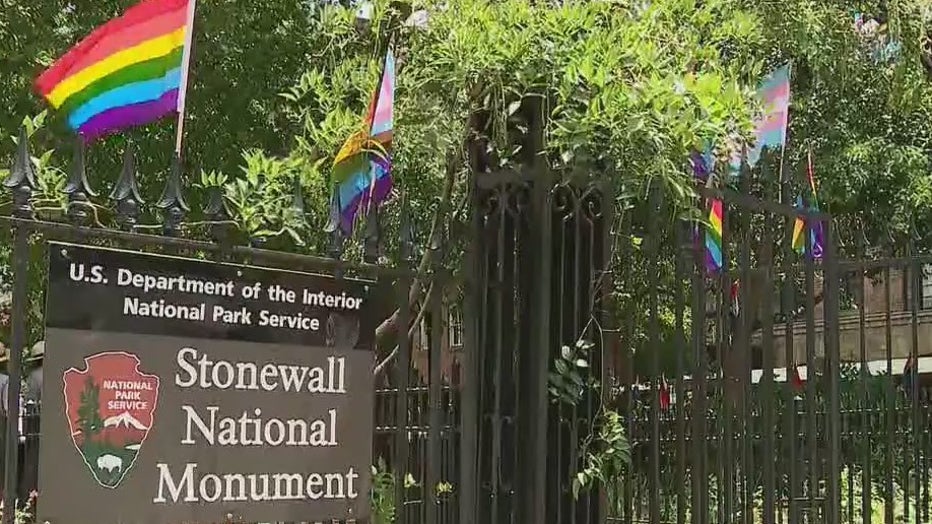 A sign and flags at Christopher Park, the seat of the Stonewall National Monument. (FOX 5 NY Image)

A year after the uprising, the first Pride March was held in New York. It began as a civil rights demonstration. Over the years, it became an annual event marking the struggle for civil rights as well as remembering those lost to AIDS, violence, and neglect, the march organizers say.

The Stonewall uprising changed so many things concerning gay rights. Tree said he is proud of the younger generation of activists who have ushered in so much progress, including marriage equality.

Even though so much has changed, many in the LGBTQ community say we have much farther to go. That is why the future Stonewall National Monument visitor center will not only embrace the past but also hold the future.

With The Associated Press and FOX 5 NY's Stephanie Bertini.