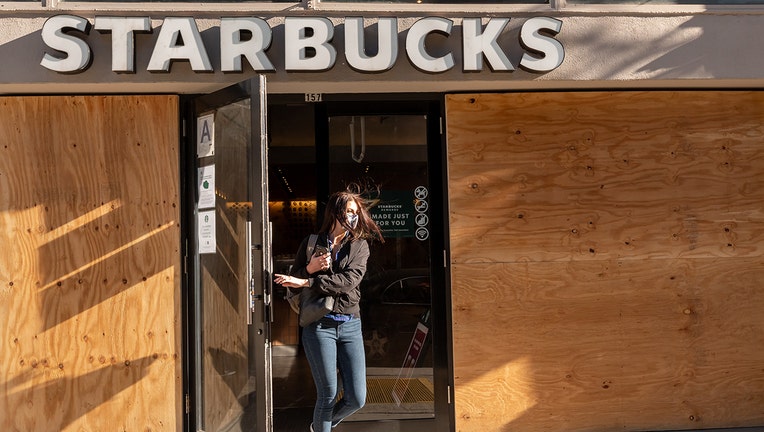 A person walks out of Starbucks in SoHo on November 02, 2020 in New York City. (Photo by Noam Galai/Getty Images)

NEW YORK - Starbucks closed some New York City stores on Sunday "out of an abundance of caution" as cities across the U.S. braced for protests and potential unrest ahead of President-Elect Joe Biden’s inauguration. Starbucks spokesperson Jessica Conradson said the Manhattan stores were expected to reopen Monday.

The Seattle-based company said it went ahead with the temporary closures because many people working in the stores live outside of Manhattan and might've gotten stuck from getting home if protests were to break out and disrupt transit service.

FOX 5 News saw signs on locations that had been closed warning customers of the closures.

There were no major protests in New York City on Sunday. Public officials have said there are no specific, credible threats to the city stemming from the election or the violence Jan. 6 at the U.S. Capitol.

The NYPD said it has increased security around certain government locations in the city as a precaution.  This came after protests erupted in New York City following the chaos at the Capitol.

Governors in some states have called out the National Guard, declared states of emergency and closed their capitol buildings over concerns about potentially violent demonstrations.

At the state capitol in Albany, it was a quiet day despite fears stoked by warnings of an armed protest, with a smattering of counter-protesters outnumbering Trump supporters.