New York City is getting ready to bring back pandemic restrictions in certain neighborhoods after a steady increase in COVID cases there.

NEW YORK (AP) - Amid a new surge of COVID-19 in New York's Orthodox Jewish communities, many members are reviving health measures that some had abandoned over the summer — social distancing, wearing masks. For many, there's also a return of anger: They feel the city is singling them out for criticism.

"People are very turned off and very burned out," said Yosef Hershkop, a Hasidic Jew from Brooklyn who works for a chain of urgent-care centers. "It's not like we're the only people in New York getting COVID."

Over the past few weeks, top government officials, including Cuomo and Mayor Bill de Blasio, have sounded the alarm about localized upticks in COVID-19 after several months in which the state had one of the nation's lowest infection rates. Officials say the worst-hit ZIP codes overlap with large Orthodox Jewish communities in the boroughs of Brooklyn and Queens and in a couple of nearby counties.

The goal is to head off a feared second wave of infections months after the city beat back an outbreak that killed more than 24,000 New Yorkers.

Under the shutdown plan submitted to Cuomo by the mayor, 100 public schools and 200 private ones would be closed in nine areas that are home to close to 500,000 people. Those areas represent 7% of the city's population but have been responsible for about 1,850 new cases in the past four weeks — more than 20% of all new infections in the city during that span. 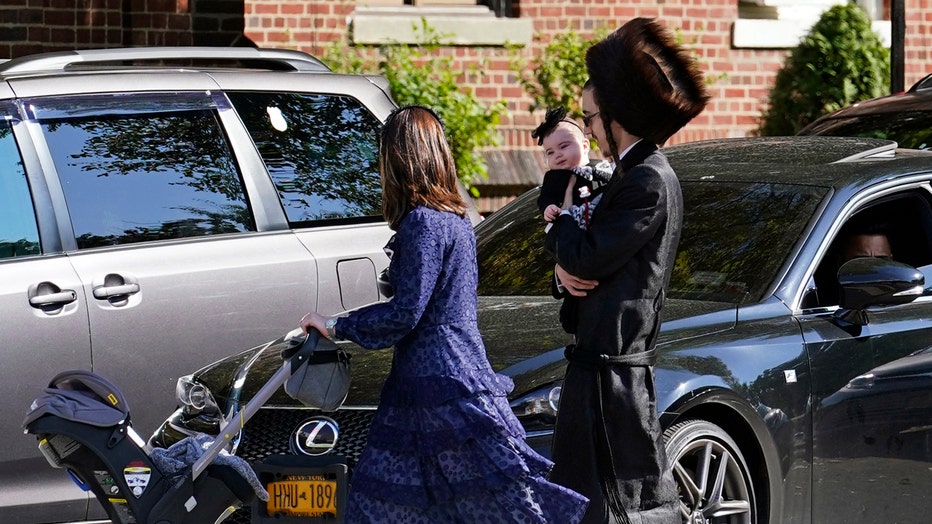 De Blasio had proposed the shutdown on Sunday, the second day of the Jewish holiday Sukkot, when Orthodox Jews would not be using telephones or computers and thus wouldn't have heard the news until sundown.

"Announcing this in the middle of a Jewish holiday shows City Hall's incompetence and lack of sensitivity towards the Jewish Community," tweeted Daniel Rosenthal, a state Assembly member from Queens.

De Blasio said he was aware of the holiday but felt obligated to announce the plan as soon as it was developed.

The emphasis on the Orthodox communities rankled many of their members, even as civic and religious leaders acknowledged the dangers posed by the new outbreak and urged compliance with guidelines. Many say they are already straining to balance rituals and traditions centered on communal gatherings with health rules.

The Jewish Voice is urging compliance with health guidelines such as mask wearing and social distancing. However, its publisher, David Ben Hooren, said many Orthodox Jews in Brooklyn and Queens believe they have been unfairly targeted with stringent restrictions that aren't being enforced elsewhere.

"The Jewish community feels they're being singled out and there's some element of anti-Semitism," he said Monday. "Not that I agree with it, but that's the sentiment in the street. Tensions are running high."

Rabbi Avi Shafran, director of public affairs for Agudath Israel of America, said a majority of the Orthodox Jewish community "is determined to do what is necessary" to combat the coronavirus, and adherence to health guidelines has become "much more common."

He said his organization is discouraging family outings and gatherings this week as Sukkot continues. "People must comply with any governmental directives that are aimed at curbing spread of the virus," he said.

Cuomo, at a news conference Monday, displayed images of large gatherings of Orthodox Jews and warned that he might close some religious institutions if their leaders did not abide by restrictions. He and de Blasio also are considering ordering the closing of some nonessential businesses in the hot-spot areas.

The latest developments have rekindled friction that surfaced in March and April, when some Orthodox neighborhoods in and around New York City were hit hard by the coronavirus. Hundreds of people died or were hospitalized, and lockdowns closed many Jewish schools and businesses.

In April, de Blasio oversaw the dispersal of a big Hasidic funeral in Brooklyn and took heat over a tweet warning "the Jewish community, and all communities" against large gatherings. Some community members accused him of a double standard because of his support for gatherings linked to the Black Lives Matter movement.

Why the upsurge? Some residents cited the return of Orthodox families from summer getaways at the shore or in the Catskill Mountains, and the recent reopening of some Jewish schools. Shafran said some community members, after the springtime outbreak subsided, lowered their guard with less wearing of masks and social distancing, and resumed exchanging of hugs with extended family.

One long-running dispute involved the city's efforts to restrict a specific circumcision procedure used by some Orthodox communities, claiming that it posed a health risk.

In 2018 and 2019, measles cases spread in Orthodox communities in New York as well as other regions. As ripples of anti-Semitism surfaced, some Orthodox leaders felt the Health Department should have focused more on working with the affected communities and less on scolding them.

"There's a lot of trust that has been eroded over a decade," Seligson said. "You need much greater integration with these communities — flood them with outreach, speak to every synagogue, every doctor."

Asked about such criticisms, the Health Department issued a statement from Health Commissioner Dave Chokshi saying: "Wherever we have gone, we have worked hand-in-hand with the community and we will always work to build trusted partnerships so that everyone knows how to protect themselves."

Sarah Horowitz, a Hasidic resident of Brooklyn's Midwood neighborhood, was angered by the possibility of new restrictions and what she felt was the heightened scrutiny of her community.

Already, she said, she has been struggling to find the right balance of work and parenthood now that her 9-year-old daughter's private school has been shut down because of the virus.

"Everyone is frustrated," she said after de Blasio's announcement. "We all feel targeted by the mayor. We just want our lives to get back to normal. ... It's like we are living under a black cloud."

To an extent, the friction in New York mirrors developments in Israel, where the ultra Orthodox have been criticized for ignoring safety rules and crowding into synagogues even as the country battles a new COVID-19 outbreak. Israel's coronavirus czar says the ultra Orthodox, who are about 10% of the population, account for around 40% of the new cases.