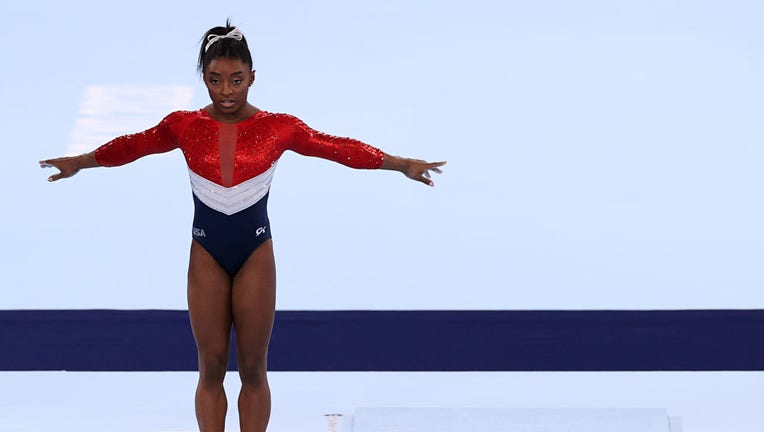 Simone Biles of Team United States competes on vault during the Women's Team Final on day four of the Tokyo 2020 Olympic Games at Ariake Gymnastics Centre on July 27, 2021 in Tokyo, Japan. (Photo by Jamie Squire/Getty Images)

NEW YORK - A sprinting Simone Biles cartwheeled, planted her hands atop the vault, launched herself into the air, and then lost her focus, twisting fewer times than her routine called for before landing back on the mats inside the Ariake Gymnastics Center on Tuesday.

"No injury, thankfully," she said, after the Olympics competition. "And that's why I took a step back because I didn't want to do something silly and get injured."

Biles withdrew from the team final after that vault and then watched her teammates lead the heavily favored and undefeated-for-the-last-decade Team USA to a silver medal, while Russian gymnasts took the gold.

"I just felt like it would be a little bit better to take a backseat," Biles said, "work on my mindfulness."

Biles' mental health break from competition — however long it might last — comes just two months after 23-year-old, four-time grand slam-winner, Olympic cauldron-lighter Naomi Osaka withdrew from the French Open to preserve her mental health. Ahead of these games, 23-time gold medalist, and most decorated Olympian ever, swimmer Michael Phelps spoke to PEOPLE Magazine about his struggles after police arrested him for a DUI in 2014.

"Multiple days being in my room, not wanting to be alive, not really knowing what to do, where to go, who to turn to, being lost," Phelps told PEOPLE. "For years I stuffed my emotions away because I couldn't show that weakness or that vulnerability."

Fader reminded us: Athletes have always fought to handle pressure. Eight-time grand slam-winner and tennis hall-of-famer Andre Agassi wrote of his mental health challenges after retiring. Heisman Trophy-winner and NFL Pro-Bowler running back Ricky Williams left football for a season at the peak of his career.

"It's definitely not a new thing," Fader said. "On the other hand, there's been a worldview, a zeitgeist change."

And as the stigma surrounding mental health fades, we see more athletes — like Biles, Osaka and Phelps — speaking openly about their struggles.

"There should be much more proactive efforts towards acknowledging and preventing mental health issues toward athletes," Fader said.

And it's in that prevention, Fader believes, we need to invest the most. We prepare young athletes to physically and tactically compete at the top levels of their sport but slack on the mental preparation.

Biles was among the hundreds of female gymnasts sexually assaulted by USA Gymnastics team doctor Larry Nassar. Leading up these games, Biles said part of her decision not to retire and to compete in Tokyo was to ensure a survivor remained on the team so USA Gymnastics could not simply brush aside the decades of sexual assault that occurred on its watch.