The threat of severe weather shifted to the Southeast U.S. on Thursday, including areas of the Florida Panhandle facing the possibility of strong thunderstorms and a few tornados.

Severe thunderstorms were possible for much of Florida and the Southeast at large, as well as "isolated tornadoes" in some areas, the National Weather Service said.

"Favorable conditions" for severe weather will continue through Thursday in northern Florida, southern Georgia and the Carolinas. Damaging wind and isolated tornadoes will be the main threat amid severe storms.

The cold front was expected to also bring a risk of strong or severe storms Thursday afternoon down to the Tampa Bay Area.

"We have quite a wind event coming our way," FOX 13 Tampa Bay meteorologist Dave Osterberg said, adding that wind gusts could reach 60 mph. "As we go through tonight and tomorrow, we get this west wind and we’re still, tomorrow morning and afternoon, looking at winds gusting well into the 30s." 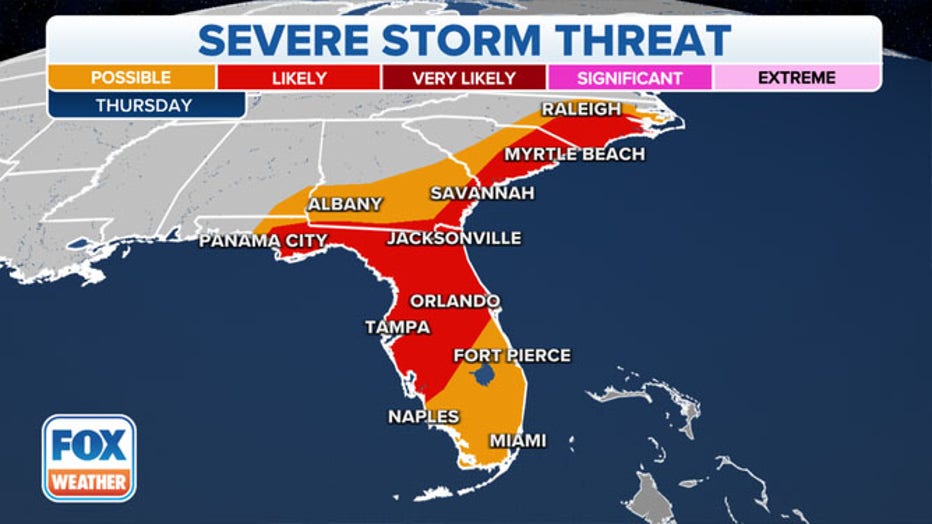 A cold front triggering the wet weather has a history of producing severe storms, forecasters said.

Several tornadoes were confirmed along the Gulf Coast on Wednesday, one of which caused significant damage near Lake Charles, Louisiana. The National Weather Service received nine total reports of tornadoes between southeastern Texas and southwestern Mississippi.

"An area of low pressure will deepen as it brings scattered showers and thunderstorms from the Midwest to the Southeast today before setting its sights on the Mid-Atlantic and Northeast for Friday," the National Weather Service said in its Thursday morning update.

The agency said heavy rain leading to possible flash flooding would be a concern for parts of the Mid-Atlantic and Central Appalachians, "where between 1-2 inches of rain may fall by Saturday morning."