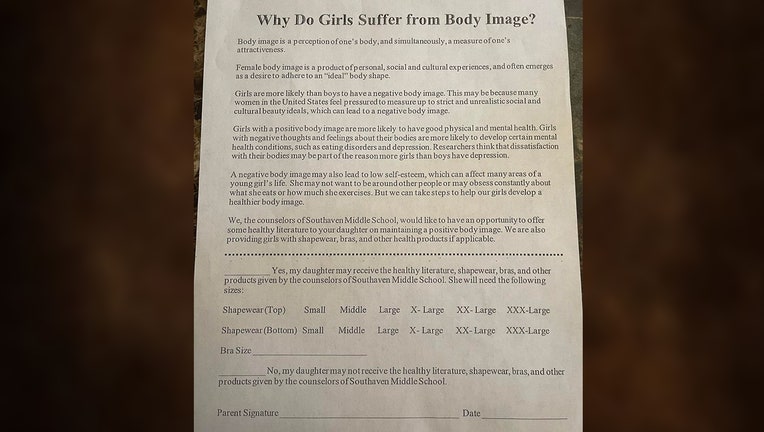 SOUTHHAVEN, Miss. - When Ashley Wells Heun’s eighth-grade daughter Caroline returned home from Southaven Middle School on Jan. 11, she had a letter to show her mom.

The letter, titled "Why Do Girls Suffer from Body Image," discussed the mental and physical benefits of a positive body image, and how girls are more likely than boys to have a negative body image.

Heun told FOX Television Station’s Group the beginning part of the letter "was spot on."

"We do need to be concerned about the effect a negative body image can have on mental health, especially in this particular age group," Heun noted.

But it was the end of the letter that left Heun "honestly shocked."

The letter continued: "We, the counselors of Southaven Middle School, would like to have an opportunity to offer some healthy literature to your daughter on maintaining a positive body image," the letter read. "We are also providing girls with shapewear, bras and other health products if applicable."

Heun said the letter was handed out in class to all the seventh and eighth-grade girls. The boys did not receive a letter.

"Honestly have no idea why the school missed the mark. I am all for offering literature, bras, underwear, etc to girls, but shapewear should have never been in the conversation. It is highly inappropriate for that age group for many reasons both physically and emotionally," Heun continued.

RELATED: Assignment at Mississippi middle school asks students to ‘pretend like you are a slave’

The letter, which Heun posted to social media drew hundreds of comments.

She said she decided to post the letter publicly because she wanted other parents in her community "to know what was sent out, how bad the message was, and in hopes of having other parents express their outrage to the school."

"The message that comes across is ‘we understand how hard it is to attain the ideal body. It's not possible, so here is some shapewear to make you look better,'" Heun added.

The mother sent an email to the principal and outlined her concerns about the letter and the message it was sending.

In a meeting with the principal, Heun said he "apologized profusely" and said that he "agreed with a lot of the things" that she said.

The school district said in a statement to FOX that they had been "made aware of the parental permission form sent to a parents" by Southaven Middle School.

"District officials understand how this type of information causes serious concern from parents. The principal at Southaven Middle School has met with the parent, and the school has discontinued the implementation of the program," the district’s statement continued.

Heun noted she does not want to bash the school but wants to send a message to the public on "how easily we can send damaging messages to our children."

"Boys have body image issues just as well as girls can, and we send them messages, both directly and indirectly, all the time. They see and hear everything and can easily internalize negative messages," she continued. "I just want this story to start conversations. I want people to read this story and consider their own kids and their body image. I want them to think about the messages they send, often without even meaning to. I want parents to ask their kids what they think about this story and about shapewear, body image, and/or social media. The last couple years have taken a toll on the mental health of our young people and I want parents to check in with their kids and see how they are really doing," Heun wrote.

And, researchers and doctors agree.

A survey by CommonSense Media suggested a possible link between media use and kids’ social-emotional well-being, with very high media users rating their emotional health lower than kids who used less media.

"Given the strong pull of social media, it also seems valuable to remind our teens that you do not need to engage with any media. They can erase an app from their phone or stop themselves from responding to others’ comments on social media. We want our teens to feel empowered to make choices concerning their media use, including choosing to avoid some social media," body image expert and psychology professor Dr. Charlotte Markey wrote in Psychology Today.

In addition, Dr. Aaron Gersh, a family physician, said in a blog post, if you hear your child making comments about their body, "don’t dismiss them."

"Talk about the comment and ask questions," Gersh wrote in FamilyDoctor.org. "For example, if your 8-year-old daughter says that her stomach is too big, don’t brush it off by saying, ‘Don’t be silly.’ Ask her why she thinks it is too big. This will start a conversation and give you an opportunity to talk about what makes her special. You can steer the conversation back to having a healthy body and how our healthy bodies sometimes look different than what we see on TV and in magazines."