What is D-Day? An explainer on the massive WWII invasion of Normandy

On June 6, 1944, the largest air, land and sea invasion in military history took place on the Normandy coast of France.

COLLEVILLE-SUR-MER, France - Joy and sadness in acute doses poured out Monday on the beaches of Normandy.

As several dozen D-Day veterans — now all in their 90s — set foot on the sands that claimed so many colleagues, they are thankful for the gratitude and friendliness of the French toward those who landed here on June 6, 1944. The sadness comes as they think of their fallen comrades and of another battle now being waged in Europe: the war in Ukraine.

As a bright sun rose Monday over the wide band of sand at Omaha Beach, U.S. D-Day veteran Charles Shay expressed thoughts for his comrades who died here 78 years ago. 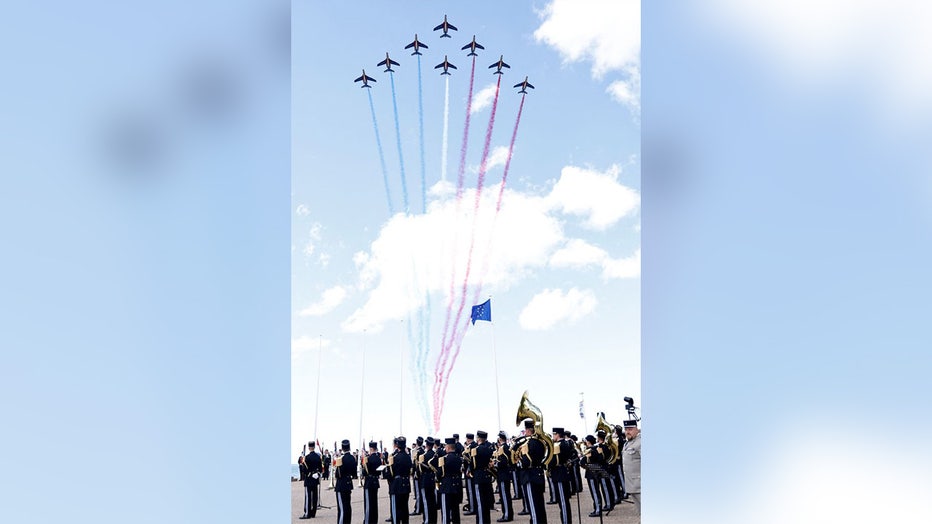 "I have never forgotten them and I know that their spirits are here," he told The Associated Press.

The 98-year-old Penobscot Native American from Indian Island, Maine, took part in a sage-burning ceremony near the beach in Saint-Laurent-sur-Mer. Shay, who now lives in Normandy, was a 19-year-old U.S. Army medic when he landed on Omaha Beach on June 6, 1944.

He said he was especially sad to see war in Europe once again, so many years later. 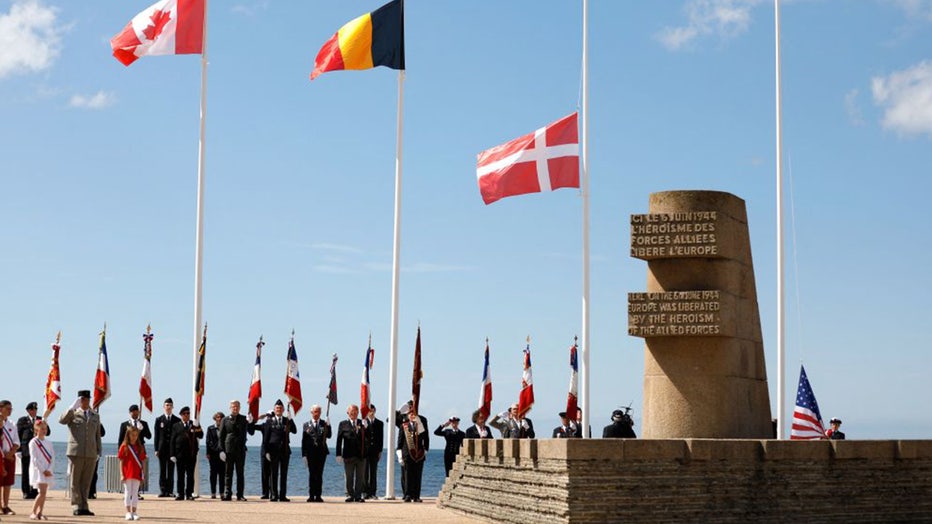 "Ukraine is a very sad situation. I feel sorry for the people there and I don’t know why this war had to come, but I think the human beings like to, I think they like to fight. I don’t know," he said. "In 1944, I landed on these beaches and we thought we’d bring peace to the world. But it’s not possible."

This year, Shay handed over the remembrance task to another Native American, Julia Kelly, a Gulf War veteran from the Crow tribe, who performed the sage ritual. "Never forget, never forget," she said. "In this time, in any time, war is not good."

Shay's message to young generations would be "to be ever vigilant."

"Of course I have to say that they should protect their freedom that they have now," he said.

For the past two years, D-Day ceremonies were reduced to a minimum amid COVID-19 lockdown restrictions. But this year, crowds of French and international visitors — including veterans in their 90s — were back in Normandy to pay tribute to the nearly 160,000 troops from Britain, the U.S., Canada and elsewhere who landed there to bring freedom.

Several thousand people attended a ceremony at the American Cemetery overlooking Omaha Beach in the French town of Colleville-sur-Mer. They applauded more than 20 WWII veterans who were present at the commemoration.

Amid them was Ray Wallace, 97, a former paratrooper with the 82nd Airborne Division. 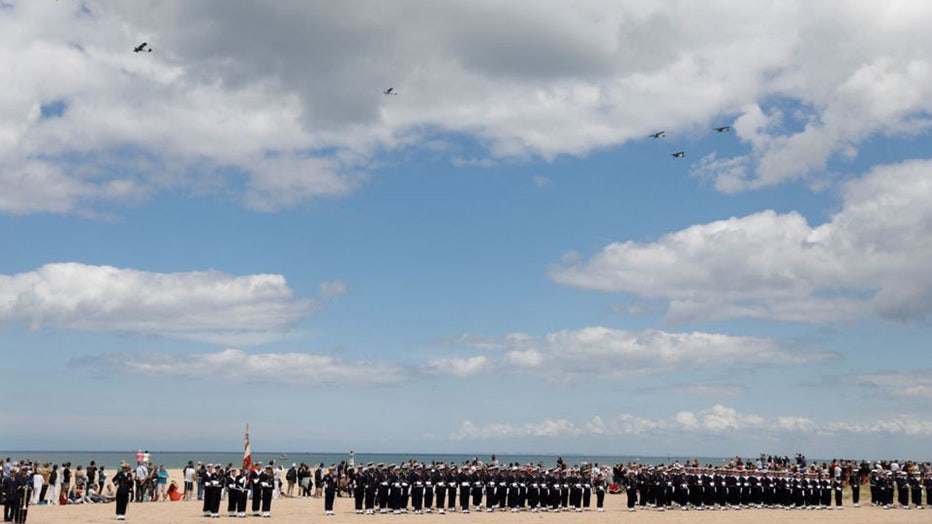 FILE - French army officials attend an air show during a ceremony marking the 78th anniversary since Allied forces landed in Normandy on "D-Day" during World War II in Ouistreham, on June 6, 2022. (SAMEER AL-DOUMY/AFP via Getty Images)

On D-Day, his plane was hit and caught fire, forcing him to jump earlier than expected. He landed 20 miles (32 kilometers) away from the town of Sainte-Mere-Eglise, the first French village to be liberated from Nazi occupation.

"We all got a little scared then. And then whenever the guy dropped us out, we were away from where the rest of the group was. That was scary," Wallace told the AP.

Less than a month later, he was taken prisoner by the Germans. He was ultimately liberated after 10 months and returned to the U.S. Still, Wallace thinks he was lucky.

"I remember the good friends that I lost there. So it’s a little emotional," he said, with sadness in his voice. "I guess you can say I’m proud of what I did but I didn’t do that much."

He was asked about the secret to his longevity. "Calvados!" he joked, in reference to Normandy’s local alcohol. 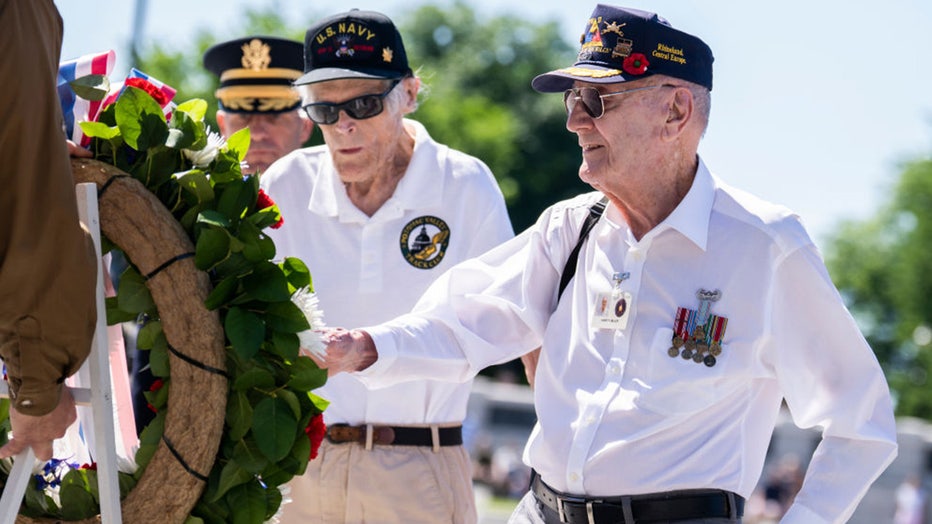 FILE - World War II veterans Harry F. Miller, right, who served in the Battle of the Bulge with the 740th Tank Battalion, and Dixon Hemphill, who served in the Navy, lay a wreath during a ceremony to celebrate the 78th anniversary of D-Day at the Nat (Tom Williams/CQ-Roll Call, Inc via Getty Images)

On D-Day, Allied troops landed on the beaches code-named Omaha, Utah, Juno, Sword and Gold, carried by 7,000 boats. On that single day, 4,414 Allied soldiers lost their lives, 2,501 of them Americans. More than 5,000 were wounded.

On the German side, several thousand were killed or wounded.

Wallace, who is using a wheelchair, was among about 20 WWII veterans who opened Saturday's parade of military vehicles in Sainte-Mere-Eglise to great applause from thousands of people, in a joyful atmosphere. He did not hide his pleasure, happily waving to the crowd as parents explained the achievements of World War II heroes to their children.

Many history buffs, wearing military and civilian clothes from the period, also came to stage a reenactment of the events.

In Colleville-sur-Mer on Monday, U.S. Air Force aircraft flew over the American Cemetery during the commemoration ceremony, in the presence of Army Gen. Mark Milley, chairman of the Joint Chiefs of Staff. The place is home to the gravesites of 9,386 people who died fighting on D-Day and in the operations that followed.

Milley had strong words about Ukraine at the American Cemetery ceremony, vowing that the U.S. and its allies would keep up their "significant" support to Ukraine. 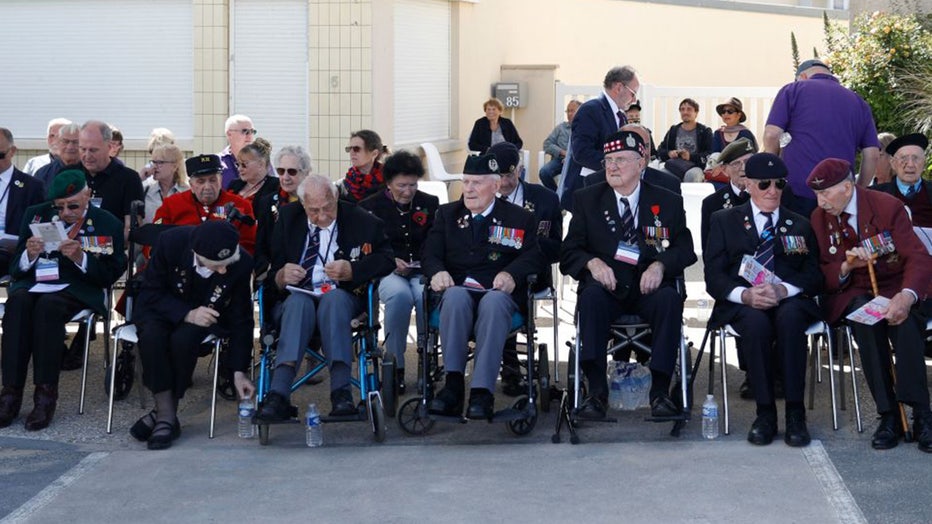 "Kiev may be 2,000 kilometers away from here, they too, right now, today, are experiencing the same horrors as the French citizens experienced in World War II at the hands of the Nazi invader," Milley said in a speech. "Let’s not those only here be the last witnesses to a time when our Allies come together to defeat tyranny."

For 82-year-old Dale Thompson, visiting the site over the weekend was a first.

Thompson, who traveled from Florida with his wife, served in the 101st Airborne Division of the U.S. military in the early 1960s. He was stateside and saw no combat.

Walking amid the thousands of marble headstones, Thompson wondered how he would have reacted if he landed at D-Day.

"I try to put myself in their place," he said. "Could I be as heroic as these people?"