NEW YORK - Anna Sorokin, also known by the alias Anna Delvey, was convicted of eight felony charges in 2019 for posing as a German heiress and taking hundreds of thousands of dollars from friends and businesses.

Now Sorokin, who is currently being held at an ICE detention center for overstaying her Visa in the United States, says she is launching a collection of NFTs.

According to the infamous socialite’s website, this will be Sorokin’s ﬁrst creative endeavor since the world learned her name and "marks the beginning of the next chapter of her life."

The 31-year-old plans to offer access to the public to reach her directly through an NFT that can be purchased with cryptocurrency. 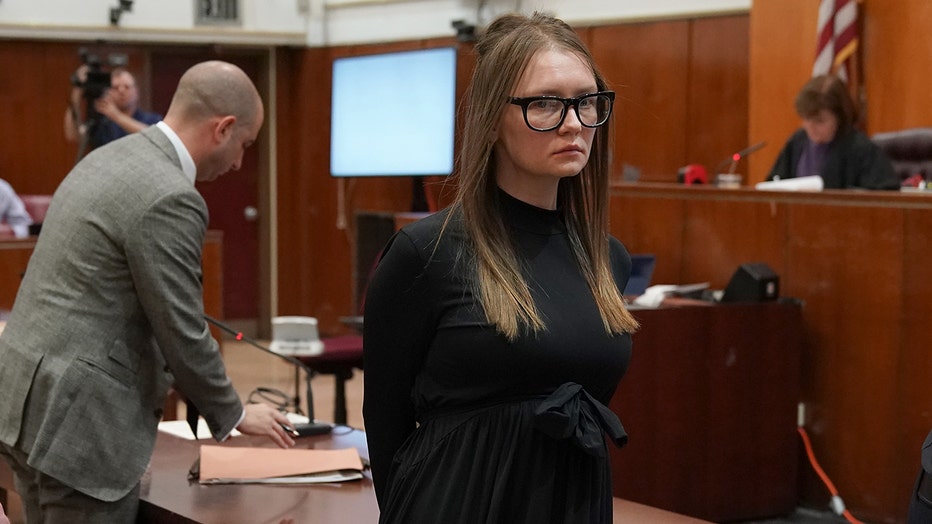 Fake German heiress Anna Sorokin is led away after being sentenced in Manhattan Supreme Court May 9, 2019. (Credit: TIMOTHY A. CLARY/AFP via Getty Images)

"I just received so much support, like people going to great lengths to get in touch with me," Sorokin said in an exclusive interview with NBC this week. "It’s staying connected with people who feel inspired by my story."

All holders of the "Reinventing Anna" NFT will get access to her through exclusive live streams and other online and metaverse events, and a select group of top holders will have access to personal items from her time in prison, personal sketches drawn by Sorokin herself and even one-on-one calls with her.

RELATED: Fake German heiress has a Netflix deal; state wants to stop her from cashing in

"I see this first drop as an opportunity to directly connect with my audience and to take charge of the narrative that's been largely outside of my control, until now," she wrote on her company's website. "I’m very excited to join the NFT community and contribute to the change in the way artists/creators interact with their fan base. It feels great to be a part of something new and innovative - a large part of my own story is about breaking the rules and questioning status quo. In this new chapter of my journey, I'm hoping to use my voice for a positive (and legal) cause."

Sorokin was sentenced to prison and served about three years of a four to 12-year prison sentence and was released on good behavior in 2019. Six weeks following her release, she was arrested by ICE and has remained in custody since. She awaits a judge's decision on whether she will be deported back to Germany, where she is a citizen.

"I lived out most of my adult life in NY and a lot of my friends and support system are based in the US," Sorokin told Fox News Digital in an emailed statement. "I don't see a reason why I should be banned forever while so many violent offenders get released by ICE on daily basis."

Sorokin, who currently has 1 million Instagram followers after Netflix released a show based on her life called "Inventing Anna" in February, has managed to keep her social media accounts active from prison, appearing frequently in news interviews and on podcasts.

"I was never acting with any malicious intent, and I'm not just like this vicious like scamming person trying to like take advantage of anybody who's just like stupid enough to fall for it," Sorokin continued. "I would love to be given an opportunity for people to not just dismiss me as a quote unquote scammer and just see what i'm going to do next."

This story was reported from Los Angeles. FOX News contributed.