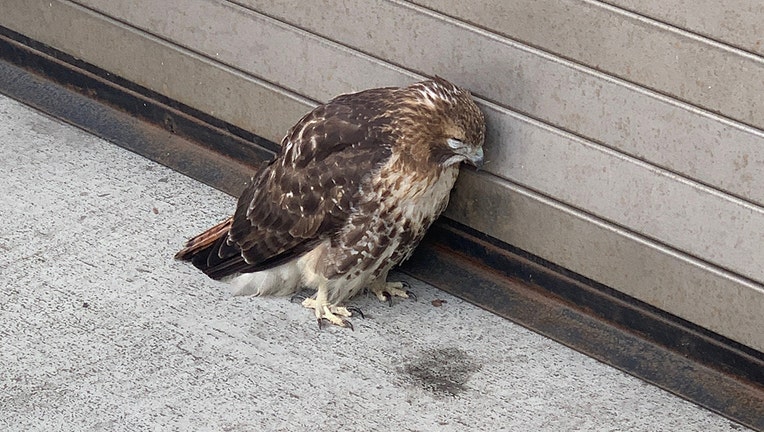 A red-tailed hawk hit the side of a building in Brooklyn and fell to the sidewalk, Jan. 28, 2020. (U.S. Attorney's Office for the Eastern District of New York via Twitter)

NEW YORK - A red-tailed hawk slammed into the side of the building that houses the U.S. Attorney's Office in Downtown Brooklyn on Tuesday.

A security officer at 271 Cadman Plaza East saw the hawk's collision on a security camera feed, the U.S. Attorney's Office said on Twitter.

Special Security Officer George Slater and Support Services Supervisor Marc Caffray then found the injured hawk on the sidewalk on Adams Street, the office said. The bird appeared stunned and unable to fly.

Caffray used his smartphone to locate a wildlife specialist to help.

David Karopkin, a practicing attorney who also happens to be a certified wildlife rehabilitator, responded to the call. The Daily News reported that Karopkin faced some challenges getting the hawk to cooperate but ultimately succeeded trapping him.

Karopkin "raced over and transported the hawk to @wildbirdfund in Manhattan for emergency medical treatment," the U.S. Attorney's Office tweeted. "The hawk is on the mend and we salute George, Marc and David for a job well done."

The Wild Bird Fund, located on the Upper West Side, is a nonprofit rehabilitation center that cares for sick and injured wild birds and then seeks to release them back into nature.

Every year, tens of thousands of birds fly in to the city's buildings and die, according to New York City Audubon. In December, the City Council voted to require new construction to install so-called bird-friendly glass.