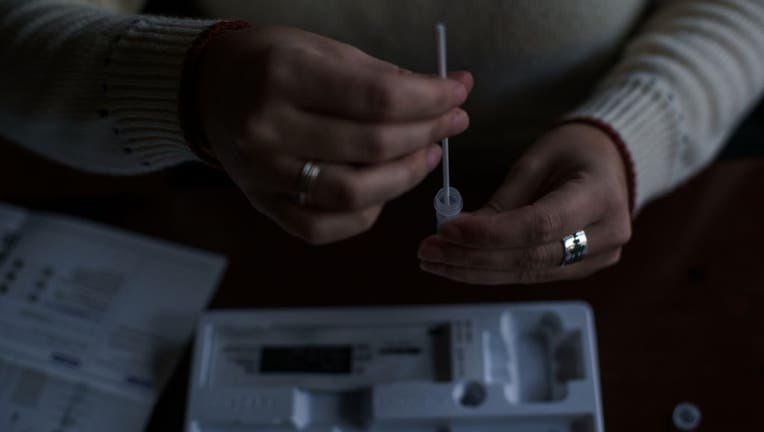 CINCINNATI - The 2021 holiday season is upon us, and many are looking forward to gathering with family and close friends to celebrate together once again.

This year marks the second pandemic holiday. And while vaccines and boosters are now widely available for much of the population, there are still questions over the rapidly-spreading omicron variant — and decisions to make regarding the risk level of attending holiday parties.

Experts say we now know a lot more about testing for COVID-19 than at this time in 2020, and at-home rapid tests could help make a family’s Christmas gathering safer when combined with vaccination.

President Joe Biden announced on Dec. 21 that the U.S. government will purchase half a billion at-home rapid tests and ship them free to Americans starting in January.

At-home test kits for COVID-19, while not as accurate as the PCR tests done in hospitals and test sites, can still add a layer of safety and reassurance by providing on-the-spot results. Rapid testing can have results back within minutes instead of days.

The U.S. Food and Drug Administration has granted an emergency use authorization to two kinds of rapid tests: molecular and antigen. Most rapid tests available are antigen tests, which detect small bits of viral protein using similar technology to what is used in a pregnancy test, according to Dr. Robert Shmerling, a senior faculty editor with Harvard Health.

"And while these tests have a higher rate of false negatives than a PCR test, getting a negative result strongly suggests you aren’t contagious. Even if you are infected, a negative result suggests there’s too little virus to infect others, at least at the time of the test," Shmerling says in a Harvard Health post.

As a result, experts say rapid COVID-19 tests could be used as a way to screen everyone coming over for holiday parties. Adults and teenagers can test themselves — and an adult can test a child as young as 2.

Many companies selling such tests offer detailed instructions and how-to videos online. Most tests require swabbing about a half-inch inside both nostrils for a certain period of time, so it may tickle but doesn't hurt. The sample is then applied to a test strip or cartridge, and the results often show a colored line to signify positive or negative.

"If a visiting friend or family member tests positive, they should leave along with anyone else they might have already exposed. The next step for them would to be to quarantine while waiting for results from a PCR test," Shmerling writes.

At-home COVID-19 tests will miss some infections and in rare cases mistakenly indicate an infection. One popular test misses around 15 out of 100 infections, which is commonly referred to as a "false negative," and gives a false positive result in about 1 in 100 people who aren’t infected.

A false positive played out in September during a live episode of "The View." Co-hosts Sunny Hostin and Ana Navarro, who were about to interview Vice President Kamala Harris, had to exit the stage during the broadcast due to a positive COVID-19 test. But they later said their results turned out to be false positives.

The FDA has given emergency use authorization to dozens of different antigen tests. Overall, antigen test sensitivity varies depending on the time in the course of a person’s infection but it’s generally "moderate-to-high" at times of peak viral load, the U.S. Centers for Disease Control and Prevention says.

Molecular, antigen and serology tests, which detects SARS-CoV-2 antibodies in serum or plasma components of the blood, are affected by viral mutations differently due to the inherent design differences of each test, according to the U.S. Food and Drug Administration.

The FDA has identified at least three molecular tests by Applied DNA Sciences, Meridian Bioscience and Tide Laboratories where performance may be impacted by mutations in the omicron variant.

"Clinical laboratory staff and health care providers should be aware that false-negative results may occur with any molecular test for the detection of SARS-CoV-2, particularly if a mutation occurs in the part of the virus' genome assessed by that test," the FDA states online.

Abbott, a company that manufactures rapid at-home tests, said in a statement that its tests are effective at detecting the omicron variant.

Siemens also claimed its antigen and PCR tests are "well designed" to detect the omicron variant.

Where to buy, cost of at-home rapid COVID-19 tests

Test shortages were widely reported during previous COVID-19 surges, but new options have recently hit the market and major manufacturers such as Abbott Laboratories have ramped up production.

As part of Biden’s plan to make 500 million at-home antigen tests free for Americans, people will use a new website to order their tests — which will then be sent to them by U.S. mail. The free tests marked a shift for the president, whose earlier plan had called for many Americans to purchase the hard-to-find tests on their own and then seek reimbursement from their health insurance.

For those who need one in a hurry, testing kits are also available at drugstores without a prescription, and a box with two tests typically costs about $25. Swabs, testing solution and instructions are all included.

Several antigen tests, such as QuickVue and Abbott’s BinaxNOW, can be purchased as a multi-pack at local drugstores. Others, like BD Veritor, are available on Amazon.

Among approved home molecular tests, the Lucira CHECK-IT kit is available on Amazon at $89 per test.

Staying safe for the 2021 holiday season

As families and friends begin to gather together amid a second straight holiday season with COVID-19, scientists are racing to better understand the omicron variant and whether it causes a more serious disease.

But scientists stress that vaccination is still the best approach to keep Americans safe from omicron and offers strong protections against severe illness and death. For those who are already fully vaccinated, a booster shot has been shown in lab tests to provide strong protection against the variant.

The CDC offers other tips on ways to enjoy the holidays safely.

Despite its limitations, Shmerling calls rapid testing for COVID-19 "a strategy worth considering for holiday gatherings or group activities" where exposure to the virus is possible.

A version of this article was originally published on Nov. 17, 2021.