STOCKHOLM - The coronavirus brought a year of fear and anxiety, loneliness and lockdown, and illness and death, but an annual report on happiness around the world released Friday suggests the pandemic has not crushed people's spirits.

The editors of the 2021 World Happiness Report found that while emotions changed as the pandemic set in, longer-term satisfaction with life was less affected.

"What we have found is that when people take the long view, they’ve shown a lot of resilience in this past year," Columbia University economist Jeffrey Sachs, one of the report's co-author, said from New York. 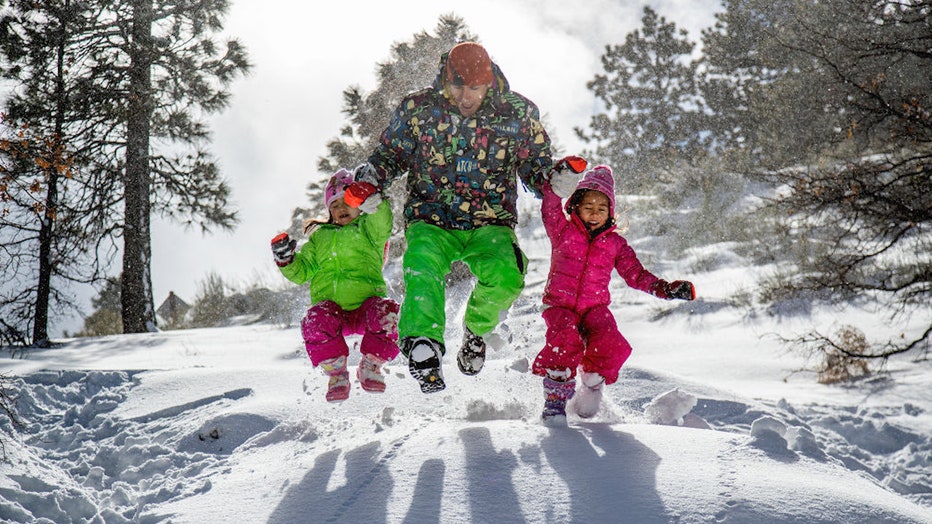 FILE - A father and hi two daughters frolicking in the fresh snow off Highway 2 on March 11, 2021 in Wrightwood, California.

The annual report, produced by the U.N Sustainable Development Solutions Network, ranks 149 countries based on gross domestic product per person, healthy life expectancy and the opinions of residents. Surveys ask respondents to indicate on a 1-10 scale how much social support they feel they have if something goes wrong, their freedom to make their own life choices, their sense of how corrupt their society is and how generous they are.

Due to the pandemic, the surveys were done in slightly fewer than 100 countries for this year's World Happiness Report, the ninth one compiled since the project started. Index rankings for the other nations were based on estimates from past data.

The results from both methods had European countries occupying nine of the top 10 spots on the list of the word's happiest places, with New Zealand rounding out the group. The top 10 countries are Finland, Denmark, Switzerland, Iceland, the Netherlands, Norway, Sweden, Luxembourg, New Zealand and Austria.

It was the fourth consecutive year that Finland came out on top. The United States, which was at No. 13 five years ago, slipped from 18th to 19th place. On a shortened list ranking only those countries surveyed, the U.S. placed 14th.

"We find year after year that life satisfaction is reported to be happiest in the social democracies of northern Europe," Sachs said. "People feel secure in those countries, so trust is high. The government is seen to be credible and honest, and trust in each other is high."

Finland’s comparative success in curbing COVID-19 may have contributed to the enduring trust the country's people have in their government. The country took rapid and extensive measures to stop the spread of the virus and has one of Europe's lowest COVID-19 mortality rates.

"In Finland as well, of course, people have been suffering," Anu Partanen, author of "The Nordic Theory of Everything" said on Friday in Helsinki. "But again in Finland and the Nordic countries, people are really lucky because society still supports a system buffering these sorts of shocks."

Overall, the index showed little change in happiness levels compared to last year's report, which was based on information from before the pandemic.

"We asked two kinds of questions. One is about the life in general, life evaluation, we call it. How is your life going? The other is about mood, emotions, stress, anxiety," Sachs said. "Of course, we’re still in the middle of a deep crisis. But the responses about long-term life evaluation did not change decisively, though the disruption in our lives was so profound."

Issues that affect the well-being of people living in the United States include racial tensions and growing income inequality between the richest and poorest residents, happiness experts say.

"As for why the U.S. ranks much lower than other similarly or even less wealthy countries, the answer is straightforward," said Carol Graham, an expert at The Brookings Institution who was not involved in the report. "The U.S. has larger gaps in happiness rankings between the rich and the poor than do most other wealthy countries."

Report co-author Sonja Lyubormirsky, a professor of psychology at the University of California, Riverside, noted that American culture prizes signs of wealth such as big houses and multiple cars more so than other countries, "and material things don’t make us as happy."

Conversely, people's perception that their country was handling the pandemic well contributed to an overall rise in well-being, Columbia’s Sachs said. Several Asian countries fared better than they had in last year's rankings; China moved to 84th place from 94th last year.

"This has been a difficult period. People are looking past it when they look for the long term. But there are also many people that are suffering in the short run," he said.

Finnish philosopher Esa Saarinen, who was not involved in the report, thinks the Finnish character itself might help explain why the country keeps leading the index.

"I think Finns are pretty kind of content on some level at being just what we are," he said. "We don’t really have to be more."

Seth Borenstein in Washington D.C. contributed to this report.