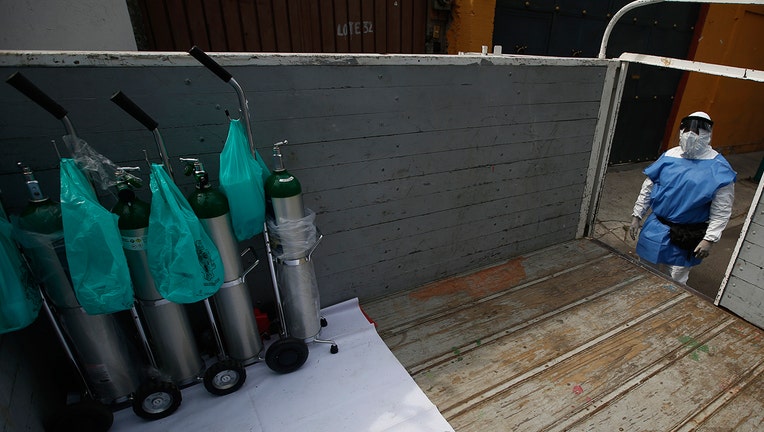 MEXICO CITY - Thefts of oxygen mounted as Mexico reported its highest daily death toll since the coronavirus pandemic began, with 1,584 deaths confirmed Tuesday. There was also a near-record one-day rise in new virus cases of 18,894.

The institute said the man pointed a gun at a hospital employee, demanded to know where the oxygen was kept, and took four empty cannisters and three full ones. Authorities in the city of Navajoa are looking for the man and and another suspect who drove off in a car carrying the tanks.

Also on Tuesday, police in the town of Tultepec, just north of Mexico City, chased down a small freight truck carrying 44 oxygen tanks, after the truck was reported stolen. Two suspects were detained at the scene.

The thefts came as authorities launched a campaign urging people to return rented oxygen tanks they no longer need, saying enormous demand amid the pandemic has created a shortage of the cylinders.

The consumer affairs agency launched an online campaign under the slogan "Return Your Tank, For The Love of Life."

With hospitals in Mexico City and other states overwhelmed by a wave of COVID-19 cases, many families have turned to treating their relatives at home with supplementary oxygen, creating spot shortages of tanks and oxygen for refills.

But once patients recover, the agency said, many people simply keep the cannisters just in case someone else falls ill.

"By doing this they are depriving other patients of something they need at a given moment, and cannot get," the agency said.

Even those who have their own tanks must often wait in long lines and wait hours to get oxygen tanks filled.

The country’s Defense Department, meanwhile, said four doses of coronavirus vaccine were stolen at a public hospital in Cuernavaca, south of Mexico City, probably by a hospital employee or with the aid of an employee.

"This theft was able to be carried out through the dishonesty and greed of a member of the hospital's vaccination staff," the department said in a statement.

The army has been given responsibility for transporting and guarding vaccines in Mexico, but a private security firm was apparently in charge inside the hospital.

Before Tuesday, Mexico had received only about 750,000 doses of the Pfizer vaccine, and several people have been sanctioned for cutting lines to get doses. Mexico's total amount so far is enough to vaccinate about half of the country's 750,000 front-line medical personnel, all of whom will need two doses.