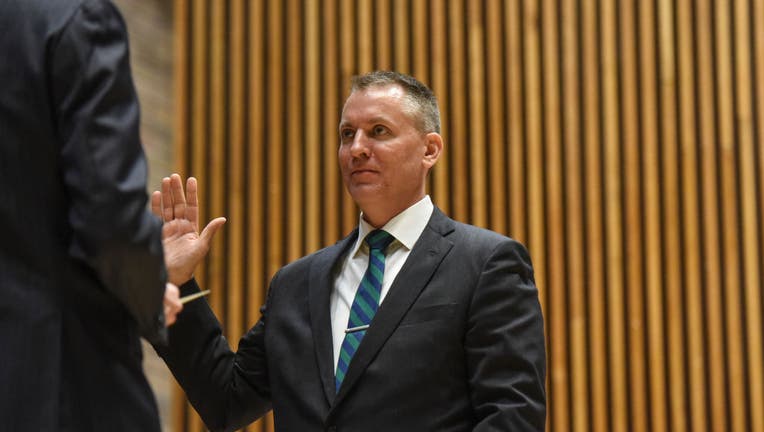 NEW YORK (AP) — On the Bronx streets where New York City’s new police commissioner started as a patrolman in the crime-ravaged early 1990s, gunfire and burned-out buildings were everywhere.

Sometimes the police radio would crackle with a different kind of call, not for a shooting or stabbing but for a sick child, a locked apartment door or a marriage on the rocks.

“I remember thinking, 'Well, why do they call the police for this? It's not an emergency,'” Commissioner Dermot Shea told The Associated Press in a recent interview. “And, you know, you kind of get a little wiser over time. The reason they call the police is because they really have nobody else to call.”

Shea, 50, is drawing on his early days as he pushes the nation’s largest police department to cultivate deeper bonds with the communities it serves — a key, he says, to building trust and cutting crime.

Shea, the son of Irish immigrants who grew up with four siblings in Queens, wants the NYPD’s 36,000 officers to remember their jobs are primarily about people — whether that means rushing to a crime scene, comforting a victim or merely lending a hand.

In many ways, he said, officers are "the glue that holds the city together.”

“Hopefully that’s the message we get to our cops and recruits, that everything you do is about helping people, working with people, serving people,” Shea said.

Shea was sworn in Dec. 2 as the city’s 44th police commissioner, succeeding James O’Neill, who left after three years on the job to become a security chief at Visa. Mayor Bill de Blasio said he was awed by Shea’s intellect and saw him as “the future of the NYPD."

Critics chided de Blasio for picking another white man to lead the department, which has had only two black commissioners. Since then, Shea has appointed the NYPD's first black chief of detectives and has made other changes to diversify the leadership.

It’s been an eventful first month for Commissioner Shea, between a rash of anti-Semitic attacks and the fatal stabbing of a Barnard College freshman — a case with the added sensitivity of youth suspects. Then there were the security implications after the U.S. last week killed a top Iranian general, and continued fallout from statewide reforms that eliminate bail for nonviolent felonies.

In previous leadership roles, Shea developed data-driven strategies for fighting and preventing crime, and helped move the NYPD to a community-oriented philosophy that encourages officers to interact with residents. Those changes followed a controversial era of stop-and-frisk and “broken windows” policing, which viewed low-level offenses as a gateway to bigger crimes. A judge found stop-and-frisk discriminatory.

Now, with crime in the city already very low, Shea wants to push further. He yearns for a day when the NYPD measures crimes prevented.

“Because we’ve gone through that process already, where neighborhood policing started the last couple of years, where we’ve started to build a lot of these relationships, we’ve changed the mindset of officers on what policing looks like.”

Shea joined the department in 1991. He took the test as something of a fallback while majoring in economics at a state university in Oneonta, New York. Shea, working as a union doorman after college, wasn't keen on spending his life sitting at a desk. As he entered the police academy, Shea said he was told being an officer is a “front row seat to the greatest show on earth.”

Shea's older brother, James, entered the academy in the same class. He retired from the NYPD as a deputy chief and since 2013 has been public safety director in Jersey City, New Jersey, where he was a key figure in the response to last month's deadly attack on a kosher grocery store.

Shea's younger brother, Paul, joined the Army after the Sept. 11 attacks and is now a major. Their late father was also in the Army.

Commissioner Shea worked in narcotics and was a precinct commander in the Bronx in the 2000s before moving into the first of several top leadership positions.

In 2014, Commissioner William Bratton called with a new assignment running CompStat, an analytics system that Shea said is “probably the engine that drives the NYPD.”

Shea would sleep in his office at police headquarters the night before weekly CompStat meetings, at which leaders study statistics and strategies for targeting high-crime areas.

Sometimes he wouldn't be done preparing until as late as 1 a.m.

Shea, who was chief of detectives before becoming commissioner, attributes his work ethic to his late father, a bartender and handyman whom he recalled missing work just once, after falling in snow and breaking his knee.

Shea’s parents emigrated to the U.S. in the 1950s but didn’t meet until living in New York.

His mother, Ellen, grew up in a Tobercurry home with a thatched roof and no indoor plumbing that was smaller than his office, Shea said, recalling a visit he made in the 1970s. His father was from County Laois.

Upon being appointed commissioner, Shea spoke of how proud his father and other relatives would have been, telling a City Hall crowd: “I can assure you there is a hell of a celebration going on in Heaven. You would have to know my father... There was probably some Irish whiskey being spilled.”