The police commissioner says the NYPD has seized and destroyed hundreds of illegal dirt bikes and ATVs and arrested dozens of people since the spring.

NEW YORK - A stretch of Third Avenue in East Harlem is a well-known route for illegal dirt bike riders doing their stunts as they head uptown. As the NYPD continues its crackdown, residents tell us they wish the police would do more.

But there are still plenty more on the streets. Residents near East 116th Street say this problem is out of control.

"They just ride and do tricks," another woman said. "I think it's entertaining but I don't think it's safe."

This week, Shea tweeted that 175 more illegal and dangerous ATVs and dirt bikes were seized this past weekend.

"So the cops are trying, they're trying to do their best," a store owner told me. "You can't control everybody."

But one resident of a nearby NYCHA development would like to see more enforcement. 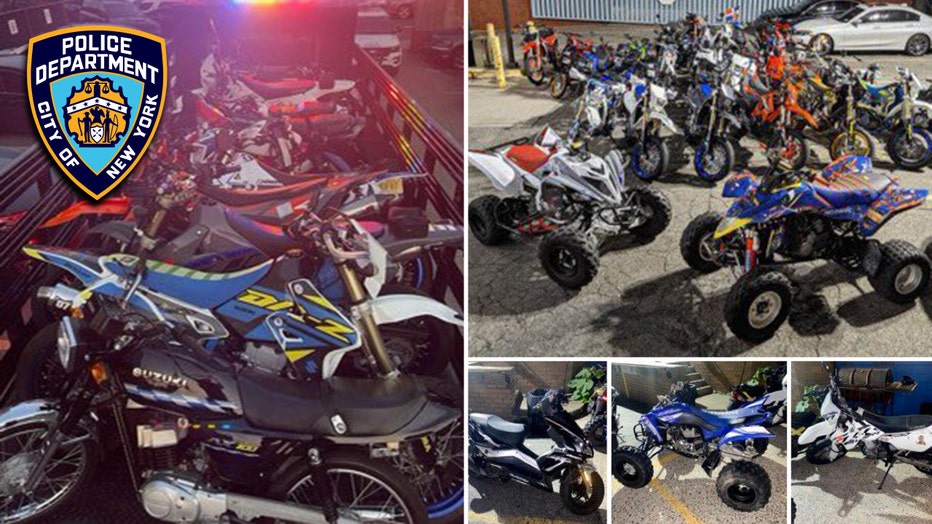 Police have seized hundreds of illegal motor bikes and ATVs in New York City in 2021. (Via of NYPD)

"They ride through the projects all day and all night. Cops don't do nothing — they stand there watching them," she said. "Kids could be playing, we could be walking, and they almost knock us over."

The police commissioner is very clear. If the police catch you on an illegal dirt bike, you could end up in handcuffs or with the summons and your bike destroyed. It's a crime issue but also a cultural one. Many illegal dirt bike riders film their stunts for social media popularity.

Illegal ATVs and dirt bikes are becoming a growing problem in the city, and now the NYPD is beginning to crack down on their usage.