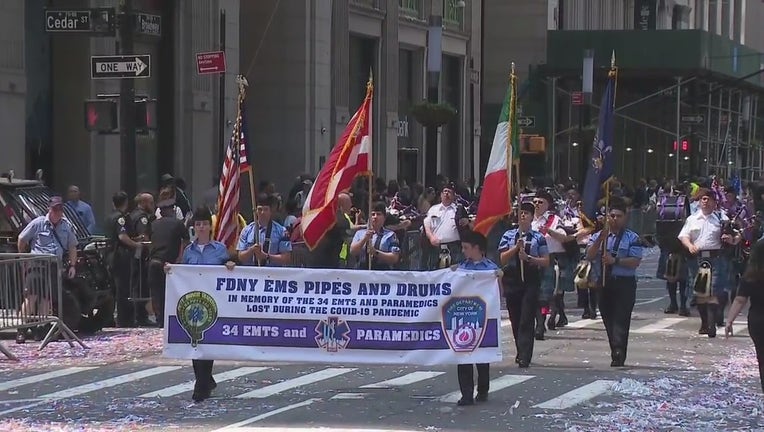 The FDNY EMS served a crucial role during the pandemic. They were saluted during the Hometown Heroes Parade. (FOX 5 NY)

NEW YORK - A few groups are taking issue with the parade that Mayor Bill de Blasio hosted in Lower Manhattan to honor essential workers who didn't have the luxury of staying home during the coronavirus pandemic and continued to serve their communities. These unions and groups are hoping the pomp and circumstance don't distract from issues they have with the treatment of workers. At least two municipal unions said their members boycotted the parade entirely.

The Uniformed Firefighters Association flat-out criticized the city for holding the parade right now, saying its members continue to face danger from the coronavirus. The union's president, Andrew Ansbro, said in a statement that a New York City firefighter who has COVID-related pneumonia is fighting for his life in an ICU.

"We think prayers for his recovery, and a memoriam for those lost, is more appropriate than a parade at this time," Ansbro said. "While no one can diminish the heroism displayed by New York City Firefighters — and all front-line heroes — during the pandemic, sadly, as we learned after Sept. 11, the danger is not always over when they say it's over."

Ansbro added that he wants the mayor to follow through on a plan to pay essential workers hazard bonuses.

"Rather than a parade, a more appropriate gesture would be to make good on this promise," he said.

In the meantime, the union that represents MTA workers said its members participated in the parade in part to draw attention to the promise of hazard pay. TWU Local 100 President Tony Utano said they marched with signs calling for the government to not forget them.

"New Yorkers and our elected officials must never forget how transit heroes continued to move this city during the pandemic despite the dangers to themselves and their families," Utano said. "Today we honor the union brothers and sisters we lost to Covid-19, and remind city, state and federal government officials that we are owed hazard pay."

COVID-19 hit the MTA labor force hard in the early months of the outbreak in the New York area. COVID-related causes have killed more than 130 transit workers, nearly all of them assigned to the subways, buses, and paratransit services.

New York City honored essential workers with a parade along the Canyon of Heroes in Manhattan.

In a statement, the Legal Aid Society, which represents New Yorkers in the courts and other avenues of the legal system, said the city needs to step up and pay its staff more.

"While we are proud to celebrate the work of our staff, and stand with fellow first responders and essential workers whose collective efforts literally saved countless lives throughout the COVID-19 pandemic, the precious dollars spent on this parade should have instead been allocated to fund cost of living increases and pay parity for public defenders and civil legal services staff," the Legal Aid Society said in part. "Mayor de Blasio and his Administration cannot credibly ask so many of the workers who risked their lives during the last year to settle for a parade rather than receive the compensation that they are rightfully owed."

The group noted that the city has boosted the budgets of the NYPD and its district attorney's offices by millions of dollars.

Some EMS workers boycotted the parade to protest their pay. And a union that reps certain health field workers skipped the parade because of the end of essential worker pay and a lack of early retirement incentives for its members, who include social workers and contact tracers.

The mayor said he appreciates essential workers and they deserve to be celebrated.

"They deserve a march down the Canyon of Heroes because it’s something that is reserved for the greatest folks in history," de Blasio said. "Well, here are some of the folks who made history in New York City's toughest hour."