Amid an alarming rise in violent attacks in the subway system, the NYPD will schedule patrol cops on 12-hour shifts.

NEW YORK - Inside the 149th Street-Grand Concourse subway station in the Bronx, riders are leaning against pillars, their backs against the walls.

"I felt very nervous about it," said one subway rider." I feel like after seeing that guy pushing someone, it just made me so nervous."

At that same station on Sunday, a 21-year-old man punched a 62-year-old man so hard that he fell onto the tracks, police said.

That attack followed two separate stabbings. A 21-year-old man was stabbed three times, while sitting on the platform of the Junction Avenue subway station, by a group of three men. Police on Monday evening released security camera images of the men they believe attacked the victim.

And a 14-year-old was stabbed on the 1 train, by two other teens. All three victims survived.

"We need more protection from the police officers," a subway rider told Fox 5 News. "They put them over there and there, but we need more."

Joseph Giacalone is an adjunct professor at John Jay College of Criminal Justice and a retired NYPD sergeant.

"We've already seen the zero-tolerance in the subway plan. If you forget, in February, the mayor announced that plan about how to deal with subway crime," Giacalone told FOX 5 NY's Linda Schmidt. "And here were are 41% later up in crime in the subway and now we're rolling out a new, new subway plan." 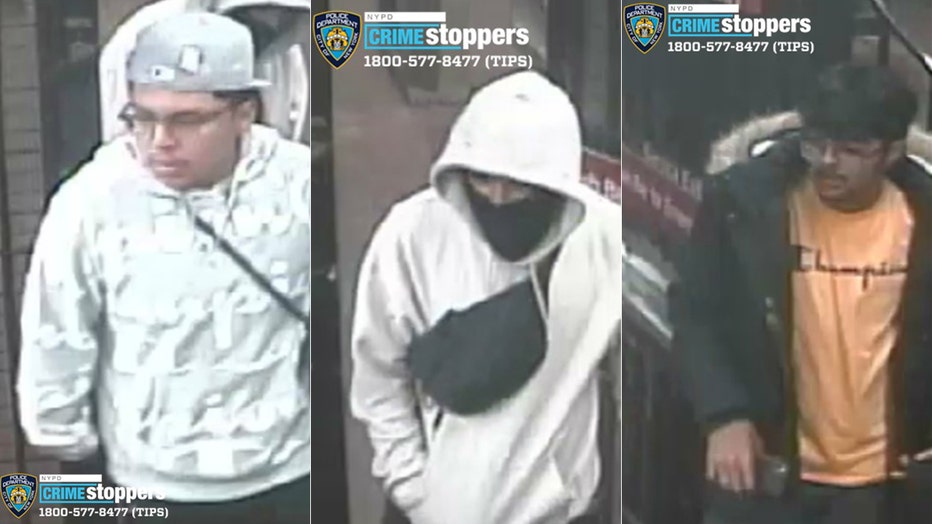 The NYPD released the security images showing three men that police believe attacked and slashed a 21-year-old man who was sitting on a bench on a subway platform in Queens. (MTA via NYPD)

Council Member Robert Holden of Queens has heard this promise before: more police officers, more overtime shifts, and more cameras. Adams made these proposals when he first took office. Holden believes the mayor is trying, but is suspicious of Hochul's timing.

"She controls the MTA and now she's announcing this program, days before an election?" Holden said. "She should have done this a year ago."

[Gov. Hochul] controls the MTA and now she's announcing this program, days before an election? She should have done this a year ago.

Holden said serious solutions to the uptick in subway crime starts with more mental health facilities, cracking down on fair evaders, who he believes are committing much of the crimes, or threatening people, and repealing bail reform.

"They keep arresting the same individuals. If you're going to do the crime, you got to do the time — and that's not happening," Holden said. "Mayor de Blasio started this by emptying our jails during the pandemic and that's when crime started to go up. Period."

Stabbing, pushing, punching, shooting. Commuters in the New York City subway are dealing with a disconcerting spate violence. The mayor and the governor keep promising action but many riders and officials are skeptical about the promises.

In the case of the attack at the 149th Street-Grand Concourse station, police officers were patrolling the station but that not dissuade the accused attacker, Deshaun Smith, 21, who may have been participating in a social media challenge called the "knockout game."