Runners taking part in the 2022 TCS New York City Marathon Sunday passed through Manhattan's Upper East Side as they made their way towards the finish line in Central Park.

Chebet won the men's race and Lokedi the women's race in her first-ever marathon on an unseasonably warm day, with temperatures in the 70s making it one of the hottest in race history since the marathon was moved to November in 1986.

Chebet finished in 2 hours, 8 minutes and 41 seconds, which was 13 seconds ahead of second-place finisher Shura Kitata of Ethiopia.

There was a scary moment in the men's race when Daniel Do Nascimento, who had been leading the entire way, collapsed 21 miles in. Race officials said later that he was OK.

The Brazilian ran the first half of the race in a blistering 1:01.22, which put him 2 minutes ahead of the course record pace. He had been leading by nearly 2 minutes for the first 15 miles before he started to slow down a bit.

Do Nascimento went down right before heading back into Manhattan and was quickly attended to by medical professionals. A few miles earlier, he had taken a quick 20-second bathroom break and also had stopped to walk briefly a few minutes before he collapsed.

Chebet saw Do Nascimento on the ground and said he "felt bad for him, but had to continue to race."

"He knew that it was hot and humid and (Do Nascimento) was going at a high pace," Chebet said through a translator. "He has a lot of experience and he knew he was going to surpass him."

Chebet, 33, pulled away from the pack when chasing Do Nascimento as they headed over the bridge into Manhattan for the first time. After Do Nascimento's collapse, Chebet took the lead and wasn't threatened the rest of the way. 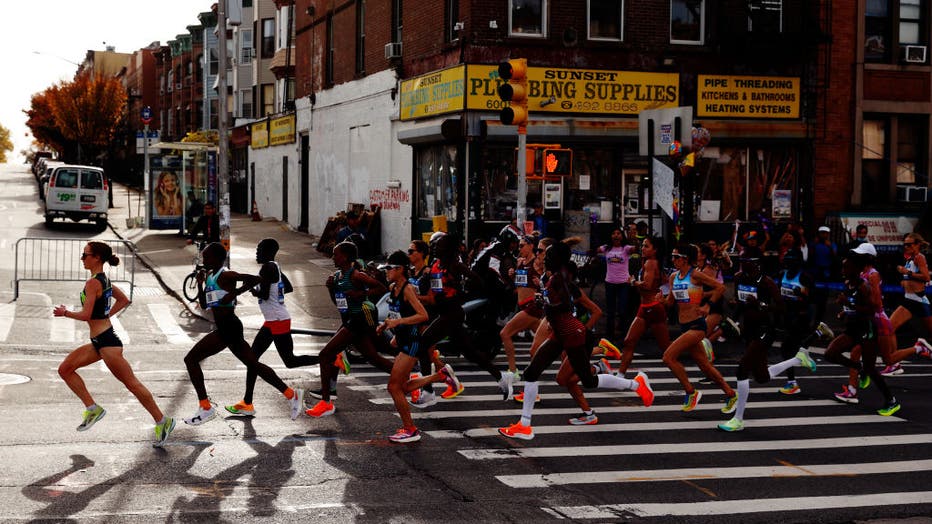 "Boston was actually harder and it prepared him for the win for New York," the translator said for Chebet. "He’s very thankful."

The victory continued a drought for American men in the race : No runner from the U.S. has won since 2009. The Americans' top hope, Galen Rupp, was in the chase pack before withdrawing from the race right before the 19-mile mark.

It was Lokedi's first-ever marathon and she finished in 2:23.23 — just ahead of Lonah Chemtai Salpeter of Israel.

The 28-year-old was in a tight race before she pulled ahead of Chemtai Salpeter in the final two miles to win by seven seconds and finish about 50 seconds off the course record.

"I didn't expect to win, I expected to run well," Lokedi said. "It was a good outcome and I'm really excited."

An hour earlier, the men's and women's wheelchair races ended with course records being broken.

Marcel Hug of Switzerland was victorious in the men’s wheelchair race for the fifth time, tying Kurt Fearnley for most-ever victories in that event. Hug finished the 26.2-mile course that goes through all five boroughs of New York in 1:25.26 to break the previous mark of 1:29.22 set by Fearnley of Australia in 2006.

"The conditions were great for us. A tail wind the first half. It was very good conditions. I think that’s the reason," Hug said of the record time. "I didn’t know the time. My goal was to go as fast as possible and didn’t focus on the time."

Hug, who also won the race last year, earned $50,000 for besting the course record. He crossed the finish line more than 2 minutes ahead of second-place finisher Daniel Romanchuk of Illinois.

The 36-year-old Hug, nicknamed the "The Silver Bullet," has been on quite a streak, winning four gold medals at the Tokyo Paralympics last year as well as the Tokyo, Berlin, London and Chicago Marathons in 2022.

Susannah Scaroni also broke the course record in the women's wheelchair race, finishing in 1:42.43. That was 21 seconds better than the old mark, which was held by Tatyana McFadden.

Scaroni, a 31-year-old from Illinois, pulled away from the field early and also earned the bonus money for topping the course record. Scaroni won the Chicago Marathon last month and was victorious for the first time in New York after finishing third in 2019.

The warm weather wasn't ideal for the 50,000 runners who started the 51st edition of the marathon, which was back to full capacity for the first time since the pandemic. Race organizers said that there were nine misting stations on the 26.2 mile race course and there was plenty of water available along the way as well as bananas and energy gels.

There were a couple of celebrities who ran the race, including Ashton Kutcher and Chelsea Clinton, who completed it for a second straight year. Both were running for charity.

Samantha Judge, the wife of New York Yankees' home run champion Aaron Judge, also ran the marathon. The baseball free agent presented her with her medal when she finished along with Yankees outfielder/designated hitter Giancarlo Stanton.