A Staten Island bar refused to abide by coronavirus rules put in place as cases were rising.

NEW YORK - UPDATE: New York City sheriff's officers on Tuesday evening slapped the handcuffs on a co-owner of a Staten Island bar that declared itself an "autonomous zone" and refused to close.

EARLIER REPORT: A Staten Island pub has refused to close despite being in a coronavirus hotspot. Last month, New York Gov. Andrew Cuomo imposed new restrictions on businesses in areas with spikes in COVID-19 cases. The measures were part of an Orange Zone declaration.

But the owners of Mac's Public House on Lincoln Avenue in the Grant City neighborhood refused to close.

"At some point, we said we had to do something because we were just going to close again," co-owner Danny Presti said.

They've been hit with thousands of dollars in fines, a shut-down order from the state health department, and the bar's liquor license has been revoked but they are defiantly staying open.

They've declared it an "autonomous zone" that is free from public-safety restrictions. A sign on the door says: "We refuse to abide by any rules and regulations put forth by the Mayor of NYC and Governor of NY State."

The bar is staying open but not charging for drinks but they are accepting donations, which they say could be a loophole from the regulations.

But the State Liquor Authority said a license is needed to serve alcohol, whether they charge for it or not.

In a statement to FOX 5 NY, the SLA said: "Investigators found the premises flagrantly violating COVID-related regulations" and the operation "is clearly illegal."

"The support we've been getting from everyone, it's overwhelming."

"The support we've been getting from everyone, it's overwhelming," Presti said. "It's humbling right now. 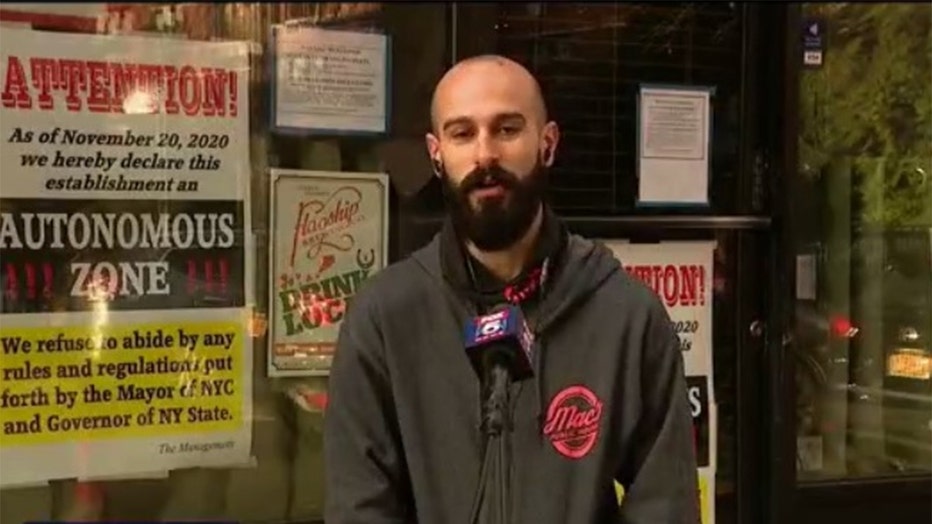 Mac's Public House co-owner Danny Presti is seen outside of the bar. (FOX5NY)

The bar says it is following safety protocols including social distancing. They say patrons are temperature scanned when they come in and must wear a mask when not seated.

COMEDIAN DIES AFTER DOCUMENTING HIS COVID-19

Presti said all he's seen is the mayor and the governor pointing fingers at the federal government while he has not been able to pay his personal and business bills.

"It's been really tough," Presti said. "Since March, they shut us down, we've adapted. We've done everything they've asked us to do and they keep sending every agency in to harm us, really, instead of helping us."