Gov. Kathy Hochul announced the creation of what will be called the New York Joint Security Operations Center, based in Brooklyn. The hub will bring together representatives from several state, local, and federal agencies as well as utility companies and businesses to coordinate defenses to cyberattacks.

Alongside several mayors, agency heads, and other officials who are partnering on the program, the governor made the announcement from the building in Downtown Brooklyn that will house the ops center.

"We realized that we're only as strong as our weakest link and the synergy between even our local governments, our cities, and our counties, they're connected to our state operations," Hochul said. "So an attack on them could lead to a larger attack and disruption of service from the state as well. So again, breaking down the silos, the data sharing that has not gone on and bringing it together under one place, and we can strengthen our defenses exponentially."

Hochul said the hub will have a staff of 70 to provide "a centralized viewpoint of threat data" on the federal, state, and local levels. Representatives from several cities — including New York, Yonkers, Syracuse, Rochester, Buffalo, and Albany — as well as a number of agencies — including the FBI, the NYPD, the Division of Homeland Security and Emergency Services, the Office of Information Technology Services, the New York State Police, the MTA, the Port Authority of New York and New Jersey, and the New York Power Authority — will work at the hub, both in-person and virtually.

We're only as strong as our weakest link and the synergy between even our local governments, our cities, and our counties, they're connected to our state operations. 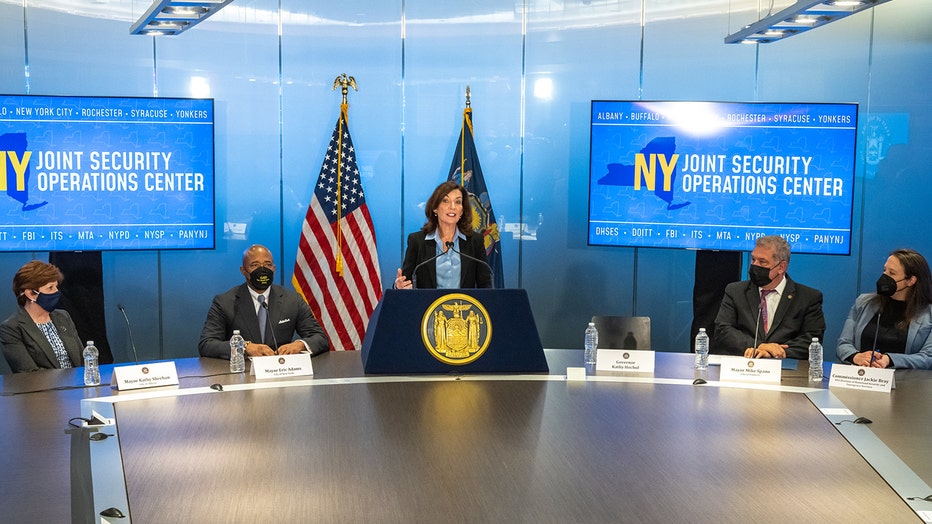 Hochul said the center will analyze cybersecurity threats that otherwise might have gone undetected.

"By collaborating and sharing literally just one space ... we're going to be able to enhance our ability to respond to any attacks, as well as prevent them," she said.

The governor has proposed a budget with $62 million for cybersecurity improvements at the state level and a $30 million fund to help local governments afford upgrades.

"We all know that cybercriminals are relentless. They are motivated, whether they're state actors, whether they're rogue individuals, they're trying to disrupt our operations," Hochul said. "Their intent is truly malicious, and that's why we want to take serious steps here today."

Cyber experts say Russia has the capability to disable or destroy U.S. satellites. Those attacks could also impact GPS for navigation, farming, automation, and oil exploration.