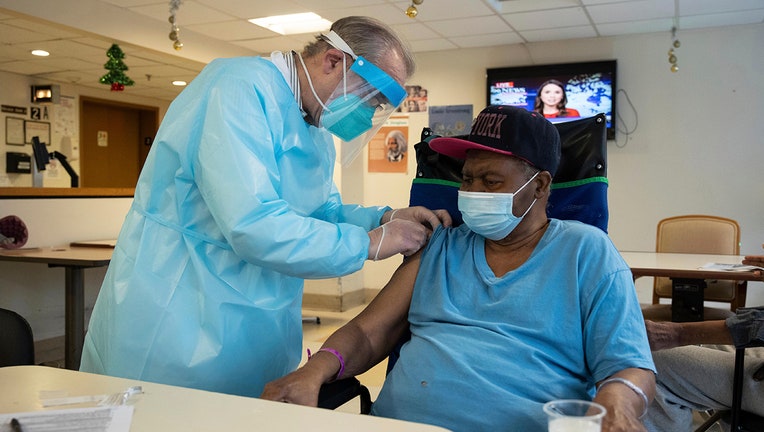 Jeannie Wells had hoped that regular visits would resume at her elderly mother's New York nursing home once all the residents were fully vaccinated against COVID-19. Around Easter, her wish finally came true, and she was able to hold the 93-year-old's hand more than a year after bringing her mother to the facility for rehabilitation for a fractured hip and knee.

But that reunion was short-lived. Visits were quickly stopped for about six weeks after an employee tested positive for COVID, and Wells said visits are still far from normal even when there haven't been outbreaks.

COVID-19 vaccines have allowed nursing homes in the U.S. to make dramatic progress since the dark days of the pandemic, but senior care facilities are still experiencing scattered outbreaks that are largely blamed on unvaccinated staff members. The outbreaks and ensuing shutdowns have jolted family members who were just starting to enjoy in-person visits with loved ones for the first time in a year.

While the outbreaks inside nursing homes now are much smaller, less frequent and less severe than during the height of the pandemic, there continue to be hundreds of deaths each week attributed to the coronavirus. According to federal data, 472 nursing home deaths were related to COVID-19 in the first two weeks of May, down from 10,675 in the first two weeks of January. 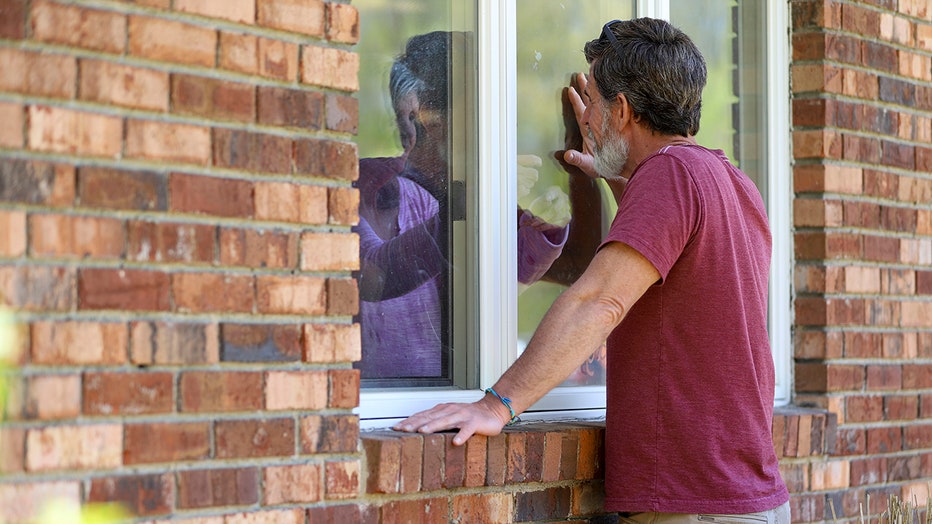 "There is this notion among some that vaccines were administered in long-term care, so we're done, and that would be a perilous mistake," said Dr. David Gifford, chief medical officer for the American Health Care Association, a national nursing home trade association, in a recent statement. "Nursing homes and assisted living communities have a constant flow of new residents, whether coming from the hospital or the community, and many of them haven't been vaccinated yet."

In addition, the CDC has warned that low rates of vaccination among health care workers in skilled nursing facilities raise risks of outbreaks.

A March outbreak involving a variant at a Kentucky nursing home, where most residents had been vaccinated for COVID-19, was traced to an infected, unvaccinated worker, according to a CDC report.  Among the 46 cases identified, 26 residents and 20 workers became infected, including 18 residents and four workers who were fully vaccinated 14 days before the outbreak.

Three of the nursing home's residents who contracted COVID-19 died, including two who were not vaccinated. So-called "breakthrough" infections among vaccinated individuals were also identified in nursing homes in Chicago, according to another recent CDC report. 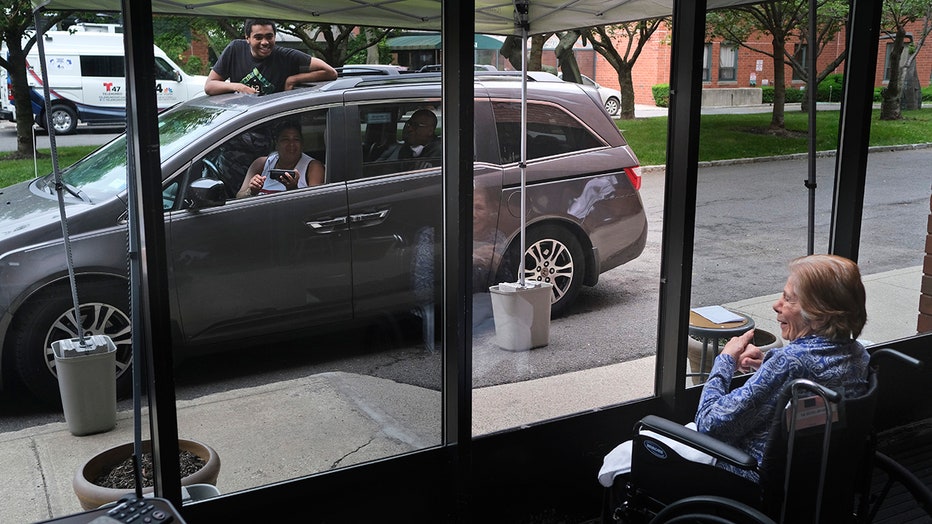 Gloria DeSoto, right, visits with her family, in their car, from a window of the Hebrew Home at Riverdale, where she lives, in New York, Thursday, June 11, 2020. (AP File Photo/Seth Wenig)

In Connecticut, Gov, Ned Lamont has likened the challenge of keeping the virus out of nursing homes to patching up "leaky boats." The state Department of Public Health launched Operation Matchmaker to match nursing homes with certain pharmacies to ensure new residents and staff get shots. Hospitals are also working to vaccinate patients before they're released to a nursing facility.

Given staffing shortages around the country, there's been a hesitance among long-term care providers to mandate vaccinations for their workers, said Dr. Vivian Leung, director of the state's Department of Health's Healthcare Associated Infections Program.

"We're working with the long-term care industry to really increase the pressure on getting those staff vaccinated," Leung said.

Tim Brown, director of marketing and communications at Athena Health Care Systems, which operates 48 facilities in Connecticut, Rhode Island and Massachusetts, recently estimated about 50% to 60% of staff have been vaccinated so far, with as many as 80% in some buildings.

"Throughout our network, we are seeing onesies and twosies, mostly with employees, though, that have not been vaccinated. That's really where we're seeing them," Brown said of the infections. If a staff member tests positive, he said, buildings are put under quarantine and visits are put on hold while another round of staff testing is conducted. Unvaccinated staff are being tested regularly.

"If there are no other cases, or if the employee did not work on a specific wing, then we allow visitation for that wing or for the wings that are not affected by the positive employee," he said. 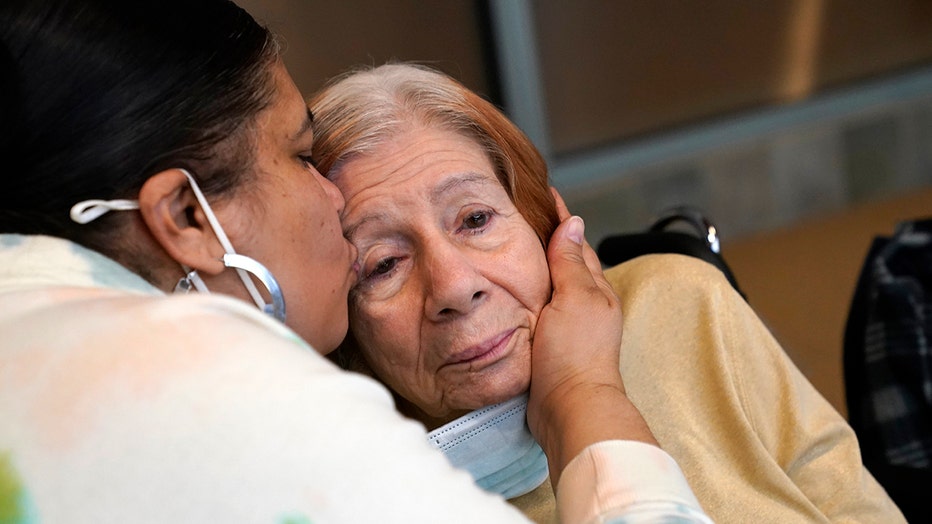 Mairead Painter, Connecticut's long-term care ombudsman, said recent guidance from the state has clarified how facilities should handle these scattered outbreaks in order to minimize the impact they can have on the rest of residents and their families. She said that's led to fewer complaints fielded by her office.

But Debra Ellis, whose 88-year-old wife Jackie lives in a Meriden, Conn. nursing home, said the rules still differ by facility. Until recently, she had been frustrated by the strict visitation limits, including sudden multi-day shutdowns when staff members have tested positive. Both she and her wife are vaccinated.

By mid-May, things finally eased up and she's been allowed to go inside her wife's room. Yet Ellis hears from relatives of residents at other nursing homes that that's not the case at other facilities in Connecticut.

Ellis is part of a group that's pushing for both state and federal legislation allowing nursing home residents to have essential caregivers. She said that could have helped her wife, who suffers from heart problems and relied on Ellis before the pandemic for emotional support and exercises to keep her legs strong.

"She could get up and walk a very small distance around the room to move to the bed to a chair or whatever," she said. "She's not longer able to do that."

That's a similar experience for Wells, who said the nursing home where her mother lives still has no communal dining, group activities or hairdressing services. Wells, who lives in Rochester, said it was only last week that she was offered the opportunity to meet with her mother outside and without masks. But after spending so much time isolated during the pandemic, Wells said her mother no longer knows who she is, other than someone who cares about her.

She said it pains her to see her mother, who used to get her hair done weekly, looking unkempt, with bangs hanging in her eyes and hair down to her shoulders.

"This nursing home never allowed us into their rooms. We have to stay in an ugly dining room that's been stripped and all the furniture stacked in the corner and in four little pods of tables pushed together and staff staring at you the whole time," she said, adding: "None of that has changed because they're allowing nursing homes to do their own thing."