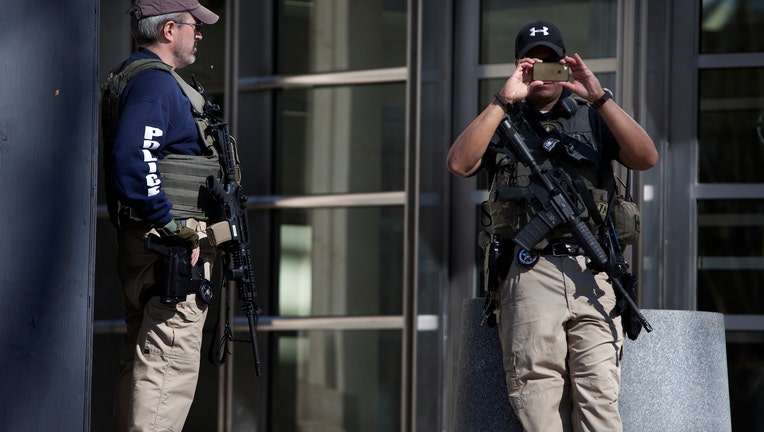 A US Marshal takes pictures of members of the media outside U.S. Federal Court in Brooklyn during the arraignment on terrorism charges of two Queens women, identified as 28-year-old Noelle Velentzas and 31-year-old Asia Siddiqui in 2015 in New York.

NEW YORK - A federal court has sentenced a New York woman to 198 months, or nearly 17 years, in prison for helping to plan a terrorist attack in the U.S.

Noelle Velentzas, 33, was convicted of "teaching or distributing information pertaining to the making and use of an explosive, destructive device, or weapon of mass destruction in furtherance of a planned federal crime of violence," according to a statement from the Department of Justice.

Her co-defendant Asia Siddiqui was sentenced to 15 years in prison in January 2020 after pleading guilty.

Court documents showed between 2013 and 2015, the women planned to build a bomb as part of a terrorist attack in the U.S. Prosecutors said they taught each other the chemistry and engineering skills needed to build and detonate an explosive.

Court documents also revealed the pair studied past terrorist attacks such as the Boston Marathon bombing, the Oklahoma City bombing and the 1993 World Trade Center attack.

They also researched how to make plastic explosives and car bombs, shopped for materials and scoped out potential police and military targets, according to documents.

"As part of her plan goal to wage violent jihad, Velentzas and her co-defendant Asia Siddiqui researched and taught each other how to construct bombs to be used on American soil against law enforcement and military targets," Assistant Attorney General John C. Demers said.

Prosecutors contend Velentzas repeatedly expressed her support for promoting and waging violent jihad. She also described Osama bin Laden as her hero and lauded the September 11th attacks as well as Mohammed Shnewer, who was convicted of plotting a terrorist attack against members of the armed services at Fort Dix in New Jersey, according to the prosecution.

"It is very, very important to note: there was never any imminent threat to our fellow New Yorkers," Mayor Bill de Blasio said in 2015 when asked about the case. The plot, he added, "was undercut before it could turn into something dangerous."