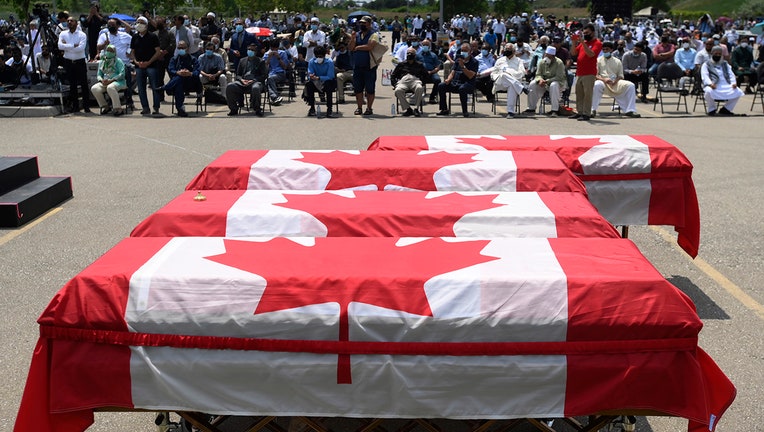 Caskets draped in Canadian flags are on display at a funeral for the four Muslim family members killed in a deadly vehicle attack, at the Islamic Centre of Southwest Ontario in London, Ont., on Saturday, June 12, 2021. (The Canadian Press via AP, Poo

LONDON, Ontario (AP) - Prosecutors laid terrorism charges Monday against a man accused of driving down and killing four members of a Muslim family in London, Ontario.

The prosecution said Nathaniel Veltman's four counts of first-degree murder constitute an act of terrorism and prosecutors have upgraded those charges under Canada's criminal code. Police allege the incident was a planned and premeditated attack targeting Muslims.

Veltman also faces one count of attempted murder due to terrorism activity.

The upgraded charges were laid as Veltman made a brief court appearance via video Monday morning. He has yet to enter a plea.

Salman Afzaal, 46, his 44-year-old wife Madiha Salman, their 15-year-old daughter Yumna and her 74-year-old grandmother, Talat Afzaal were killed while out for an evening walk on June 6.

The couple's nine-year-old son, Fayez, was seriously injured but is expected to recover.

Saboor Khan, a friend of the family, said upgrading the charges against Veltman was "the right thing to do."

"The family and the community has been terrorized and many of us are afraid to leave our homes," Khan said.

A funeral for the family drew hundreds of mourners to the Islamic Centre of Southwest Ontario over the weekend.

Veltman's next court date is scheduled for June 21.