ALBANY, N.Y. (AP) - New Yorkers made their primary election picks for Congress, president and other offices Tuesday following campaigns in which candidates largely had to connect with voters online amid a pandemic. Voters reported scattered problems with incomplete ballots and poll sites opening late, but as polls closed at 9 p.m. there were few reports of exceedingly long lines.

With the state allowing anyone to vote by absentee ballot rather than risk getting exposed to the coronavirus at a polling location, the process of collecting and counting votes will be different this year. About 1.8 million people requested absentee ballots by mid-June and had until Tuesday to postmark them, according to elections officials.

Voting locations across the state were open, but upstate there were about 3,000 fewer precincts than in a normal year due to the difficulties of maintaining social distancing and expectations that more people will vote by mail.

Erie County, home to the state's second-largest city, Buffalo, said it had 15 fewer polling locations than in the previous election. Madison County in central New York, had just 17 polling sites, down from 32 normally. 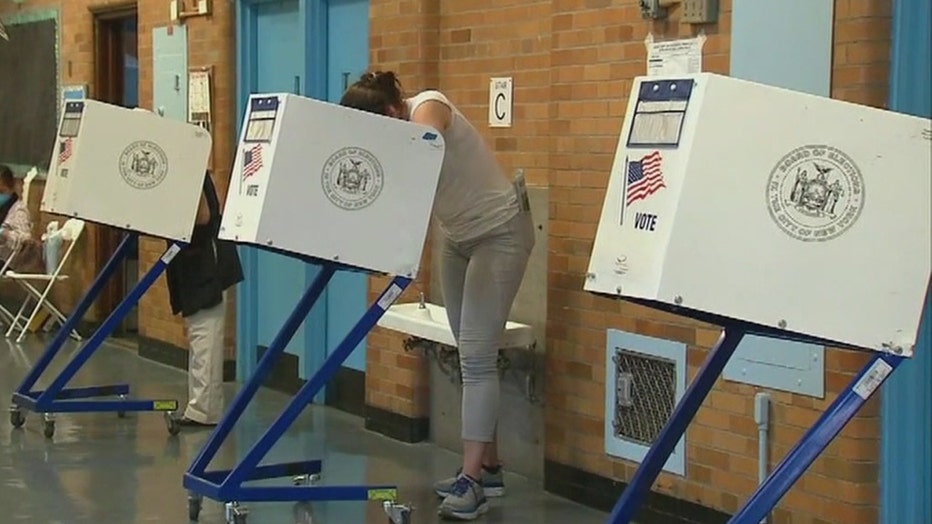 It's not unusual for New York elections to have some glitches. On Tuesday, "the unique problem was the two-page ballot," Common Cause New York Executive Director Susan Lerner said. Presidential and congressional primary candidates were on one page, with state and local primary hopefuls on another.

Voter Dena Cooper said she applied in roughly April for an absentee ballot that never arrived, so she went to her polling place in Brooklyn's Bay Ridge neighborhood to vote in person. But when she explained the situation to a poll worker, she was told to go home and wait for the absentee ballot to arrive.

In fact, New York voters who have applied for but not cast absentee ballots can legally vote in person. After getting advice from Common Cause's voter-information hotline, Cooper said she returned to the polls Tuesday evening and successfully cast her ballot."

Voting locations in the Albany suburb of Guilderland were staffed with mask-wearing poll workers Tuesday morning, but only a trickle of voters came through.

Pappachen and Alice George said they forgot to get their absentee ballot applications in on time but were able to easily fill out paper ballots at an uncrowded local fire station.

"Now I can see that my vote counted," Pappachen George said.

Polls closed at 9 p.m., but because absentee ballots aren't opened and counted in New York until at least a week after election day, the results of many primary contests might not be known until July.

Bowman called the lines "terrible" in a tweet. "We need to ensure that poll workers don't leave their places and that voters are being routinely told their votes will surely count as long as they stay in line," Bowman tweeted.

As for the contests themselves, voters are selecting the Democratic nominee for president. That primary was largely rendered moot after state officials postponed it from April because of the pandemic and Joe Biden's major opponents all subsequently dropped out of the race.

The vote will still be held, though, after a court overturned an attempt by Democratic state elections commissioners to cancel the primary.

A number of hotly contested congressional primaries will be the main event in many parts of the state.

Eleven House Democrats are facing primary challenges, including representatives Engel and Yvette Clarke, who are both facing challenges from their party's left-wing.

Voters are also picking who will represent their party in the race for House seats opening up due to the retirements of Republican Peter King and Democrats Nita Lowey and José Serrano.

A special election that concludes Tuesday will pick the successor to U.S. Rep. Chris Collins, a Republican in western New York who resigned after an insider trading conviction.

On the state level, 33 Democrats and one Republican in the Assembly and state Senate are facing primary challengers. Republicans are hoping to maintain their seats in a year when several state lawmakers have announced they won't run for re-election.

Tuesday, June 23, 2020, is primary day in New York. More than 1.7 million absentee ballots were mailed to voters but the polls will be open for in-person voting, too.