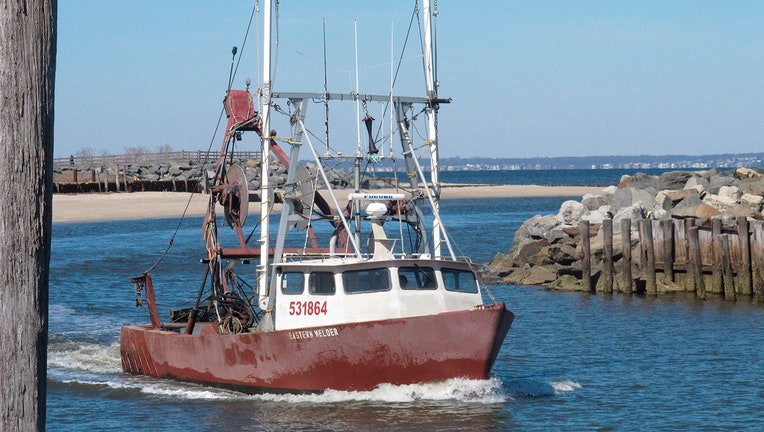 A commercial fishing boat heads for the dock in the Belford section of Middletown Township N.J. on Monday, March 8, 2021. (AP Photo/Wayne Parry)

MIDDLETOWN, N.J. (AP) - With New Jersey's commercial fishing industry about to receive a second round of federal coronavirus aid, boat owners and those who run fishing-related businesses say the extra money is helping keep them afloat amid a sea of red ink.

The state's fishing industry received $11 million last March under the CARES Act, an early aid bill passed in response to the COVID-19 outbreak.

And it should get roughly the same amount under a second bill passed by Congress in December, U.S. Rep. Frank Pallone Jr., D-N.J., said Monday. Pallone held a news conference Monday at the Belford Seafood Cooperative in Middletown with boat owners and those who run related businesses.

Many said the extra money could make the difference between working and not working this spring and summer. They declined to say how much each individually received under the measure.

"I've been on a boat with my family since I was 7 years old," said Capt. Richard Isaksen, president of the fishing cooperative. "We still haven't recovered from Superstorm Sandy that hurt us badly with eight feet of water on the dock and (which) wiped everything out."

"In the fishing industry, we're no strangers to uncertainty. We have overcome many challenges, but nothing prepared us for 2020," said Jung Kim, owner of a bait and tackle shop in South Amboy. He estimated that his store lost up to 65% of its business over the last year, including a sharp dip in wholesale supply distribution.

The charter fishing industry also sustained deep losses last year as normally packed boats were subjected to capacity limitations in the name of slowing the virus spread. Many customers simply stayed away.

"So many of our customers had to cancel or postpone their trips with us due to fear of the virus or due to their own company's restrictions," said Capt. Michael Scardigno, who owns a charter fishing fleet in the Leonardo section of Middletown. "Without this help we would not be able to bring back our employees or continue our operations."

Dave Tauro, general manager of the seafood cooperative, said the pandemic "has made it a bit of a ghost town this year, and it's made it very difficult for fishermen to go out and catch fish with prices so low. We definitely needed the help."

In order to qualify for aid under the bill, applicants had to be able to prove an income loss of 35% or more between March 1 and June 1 of last year compared to the five-year average before the pandemic hit, Pallone said.

The American Rescue Act about to be enacted does not contain aid earmarked for fishermen, Pallone added, in part because aid from the December bill has not been distributed yet.

Commercial fishing is an $8 billion industry in New Jersey, and the state has one of the largest recreational saltwater fishing industries in the U.S.