The governor urged New Jerseyans to celebrate the holidays at a distance from each other and use technology to connect.&nbsp;Phil Murphy said the number of confirmed cases have surged to 54,588, with 3,627 new positive tests.

"Behind these stark and impersonal numbers are real people and real families," Murphy said. "We must remember them."

Sam McGhee, a former mayor of Hillside, is among those who have died. He was the first African American elected mayor of Hillside, was a member of the township committe, and served on the Union County Improvement Authority, Murphy said. He was also dean of admissions at New Jersey City University for 32 years.

"Our hearts are with his loved ones," Murphy said.

The governor also paid tribute to Evelyn Sanchez, who co-owned Emergency Pest Control with her husband. Murphy said she is "remembered for her tremendous generosity of spirit."

"She leaves behind so many loved ones," Murphy said. "She will not be forgotten."

Jails and prisons remain risky environments for both inmates and workers.

New Jersey continues to focus on outbreaks at nursing homes that have led to dozens of deaths and dozens more staff and patients infected and hospitalized. Dozens of ambulances from out of state arrived at MetLife Stadium to help. Gov. Phil Murphy's message to the entire state is that while the curve appears to be flattening, a lot of additional people will die before this is over.

Murphy spoke to the widow of Nelson Perdomo, a correctional officer who died. He worked at the East Jersey State Prison.

The state's Department of Corrections said 129 staff members and 20 inmates have tested positive for the coronavirus in state facilities. One inmate as died.

The governor urged New Jerseyans to celebrate the holidays at a distance from each other and use technology to connect.

"I know this Easter weekend is one where we are used to gathering together in worship, for children’s Easter egg hunts, and for family meals," Murphy said. "We can’t do that this year. Staying apart this year is the surest way we’ll be able to gather again next Easter." 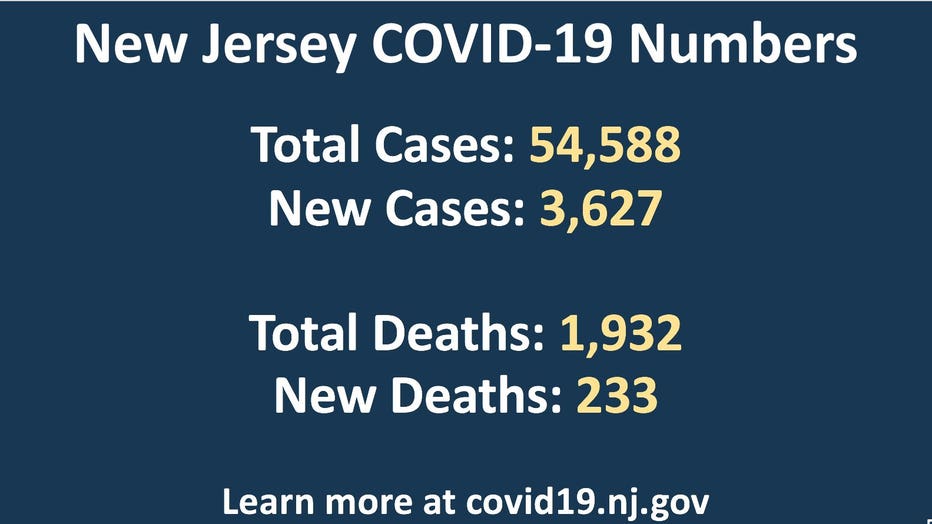