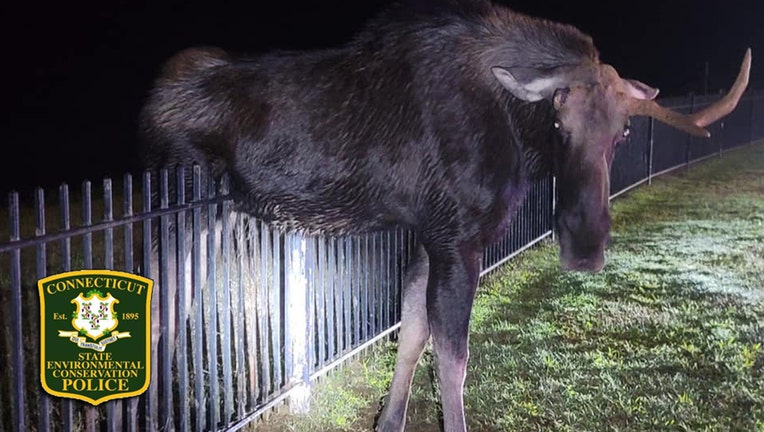 A moose was stuck on a fence on Oct. 1, 2022, in Barkhamsted, Connecticut. (Photo via Connecticut State Environmental Conservation Police)

LITCHFIELD COUNTY, Conn. - Some quick-acting rescuers helped to free a moose that was stuck on a fence in Connecticut over the weekend.

Wardens from the Connecticut State Environmental Conservation Police responded to a property in Barkhamsted and found a moose jammed on a black metal fence at about midnight on Saturday.

Thankfully, the male animal wasn't impaled on the fence but he wasn't able to get his back legs over the fence and his belly kept him from backing up, officials said in a Facebook post.

The Barkhamsted Fire Department also responded to the scene. Used a hydraulic rescue tool, firefighters cut and removed one end of the fence panel, police said. That allowed the moose to push through the remaining fence.

"After about 15 seconds or so, the moose slowly walked away which turned into a slow jog back to the edge of the reservoir disappearing into the darkness," police said.

The state has only about 100 moose but they more active during the fall breeding season, which peaks in September through October, according to the Department of Energy and Environmental Protection.

Last week, the department issued a warning to motorists to be on the lookout for moose crossing roads.

"DEEP urges motorists to be aware during these seasonal periods of activity and slow down and drive defensively should a large animal, such as a moose, be spotted on or by the road," the department said in a news release. "Because moose are darker in color, stand much higher than deer, and are most active at dusk and at night, observing reflective eye-shine from headlights is infrequent and, when struck, moose often end up impacting a vehicle windshield."

If you're driving at night, slow down and look higher on the sides of roads than you normally would for deer, officials said.

In recent weeks, people have reported seeing a moose, likely the same one, in Woodbury, Southbury, Danbury, Newtown, and New Fairfield, officials said.

"Although usually wary of people, moose can feel threatened and become aggressive. They also may demonstrate unpredictable behavior if they wander into populated areas. Under no circumstances should moose be approached," DEEP said. "Although moose may appear to be docile, they should be given the healthy respect that New England’s largest land mammal warrants."

This story was produced from New York with The Associated Press.