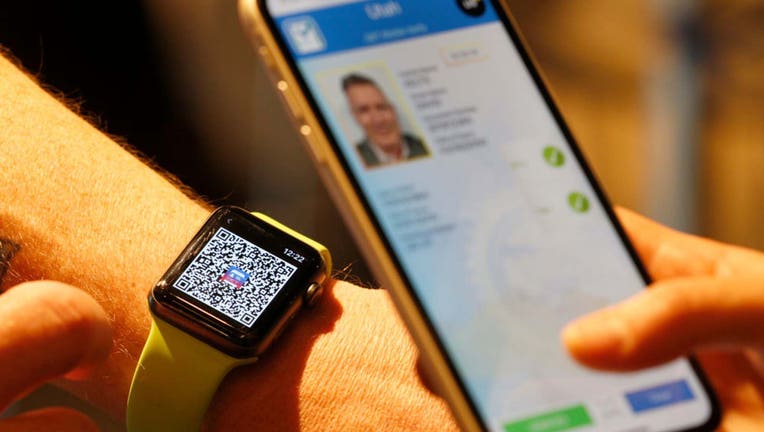 FILE - A person scans a QR code on an Apple Watch to temporarily send their digital driver's license to another mobile phone. (George Frey/Getty Images)

The Transportation Security Administration (TSA) is preparing to deploy the necessary technologies at airports in order to begin accepting mobile driver’s licenses as soon as early 2022, according to the agency.

Arizona and Georgia will be the first states with access to the new feature, according to Apple. Connecticut, Iowa, Kentucky, Maryland, Oklahoma and Utah also will participate in the rollout in the near future.

The licenses will have "tap" functionality, meaning that users can present them for review without unlocking their screens or handing their phone to someone else.

"This new and innovative mobile driver’s license and state ID initiative with Apple and states around the country will enable a more seamless airport security screening experience for travelers," TSA Administrator David Pekoske said. "This initiative marks a major milestone by TSA to provide an additional level of convenience for the traveler by enabling more opportunities for touchless TSA airport security screening."

With the advent of digital wallets and boarding passes, people are relying more on their phones to prove their identity. Several states are starting to develop ways for people to have not just their driver’s license, but their vaccination card and other state-issued documents available on a smartphone.

Mobile licenses will give people more privacy by allowing them to decide what personal information they share, state officials say. The licenses offer privacy control options that allow people to verify their age when purchasing alcohol or renting a car, while hiding other personal information like their address.

Having a mobile driver’s license will allow people to update their license information remotely without having to go to a state’s Department of Motor Vehicles or waiting for a new card in the mail, said Lee Howell, state relations manager at the American Automobile Association.

While most states with these programs recommend that users still carry their physical driver’s license as a backup, some industry experts estimate that the coronavirus pandemic has sped up the widespread adoption of contactless identification methods by at least a decade.

"Most people want some kind of a hard token for their identity, but I don’t know how long that will last," said Pam Dixon, executive director of the World Privacy Forum. "I would imagine that at some point, maybe in a generation, maybe less, that people will accept a fully digital system."

In most states, people’s data will be stored on their phone and with the DMV. People will only be able to access a mobile ID app with a passcode or using a smartphone’s fingerprint or facial recognition scan.

The Associated Press and FOX News contributed to this report. This story was reported out of Los Angeles.