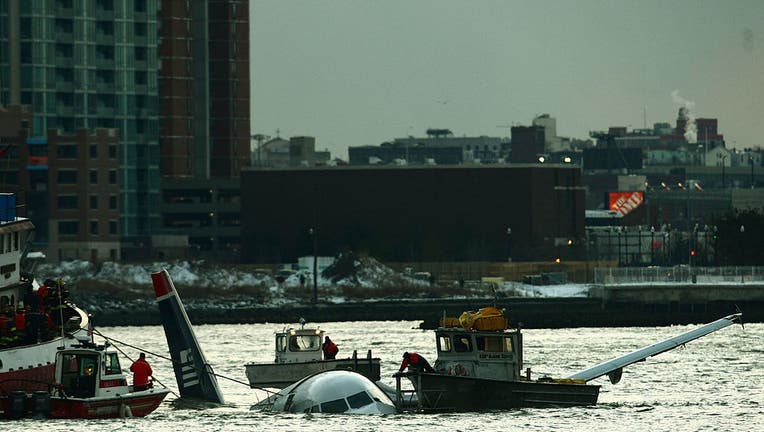 Rescue boats float next to a US Airways plane floating in the water after crashing into the Hudson River in the afternoon on January 15, 2009 in New York City. The Airbus 320 flight 1549 crashed shortly after take-off from LaGuardia Airport heading t

NEW YORK - Sunday marks the 14th anniversary of the "Miracle on the Hudson," when, on January 15, 2009, Captain Chesley "Sully" Sullenberger managed to land U.S. Airways Flight 1549 on the Hudson River near 42nd Street after losing engine power when the plane hit a flock of geese.

Sullenberger's actions, along with those of the Coast Guard, the FDNY, and over a dozen ferries saved the lives of all 155 people onboard.

NEW YORK - FEBRUARY 9:  Pilot Chesley B. Sullenberger (L) of US Airways Flight 1549 holds up a key to city at City Hall, where Mayor Michael Bloomberg (R) presented him and his fellow crew members keys to the city, on February 9, 2008 in New York City.  Sullenberger executed an emergency landing on the Hudson River on January 15, saving all the passengers on board. (Photo by Michael Nagle/Getty Images)

Sullenberger, who turns 72 this year, now lives in Northern California and is no longer a pilot, but works as a public speaker and air safety expert.

The museum will have a permanent exhibit dedicated to the "Miracle on the Hudson," expected to open this year.